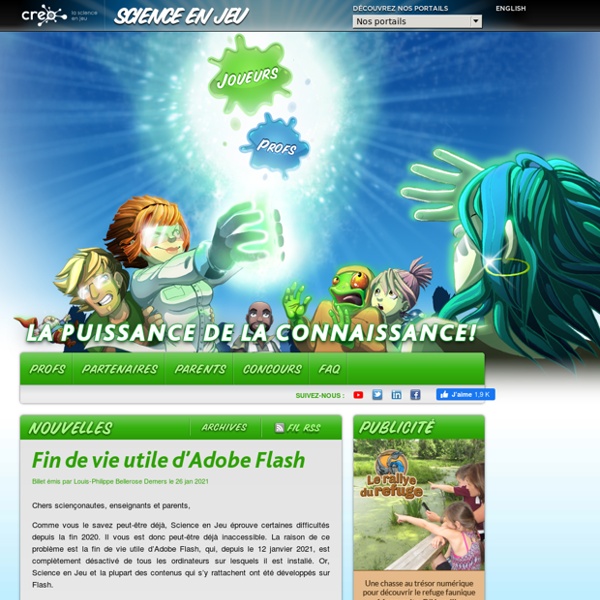 Geology of the Grand Canyon Leaflet | George Billingsley et al. © Mapbox © OpenStreetMap and Ryan Clark, 2014 Geologic Map of the Grand Canyon and Vicinity Back to the map This work-in-progress represents a spectacular set of data generated by George Billingsley and others at the USGS. The geologic data shown here was taken from the following USGS publications: "I just hiked my ass off in the canyon gathering the field data." Solve the Outbreak Your mission, if you choose to accept, is to get clues and analyze data to solve the outbreak and save lives! In this fun app, you get to be the Disease Detective. Do you quarantine the village?

Cool Math Games - Free Cool Math Games, Addicting Games. Papa’s Pastaria 155 Played0 Likes Head to Portallini and start your career as a pasta chef! Learning in Spain: Space unit resources I am currently working on my Space Unit. We are required to do this, and other units, from scratch as we don't use textbooks for Science or Social Studies in my school. I have started with some planning looking at our Science Common Core Standards (we call them Competencias). At the end of this unit my Second Graders should be able to understand the explain between day and night, moon phases, a little bit about planets, seasons...But I just started with the MOON:This is what I have so far:Some good read alouds that could cover from K-2.

Kodu Game Lab An overview of Kodu. (Click to play) Kodu lets kids create games on the PC and Xbox via a simple visual programming language. Kodu can be used to teach creativity, problem solving, storytelling, as well as programming. Anyone can use Kodu to make a game, young children as well as adults with no design or programming skills. Since Kodu's introduction in 2009, we have visited the White House, teamed up with great groups like NCWIT and DigiGirlz, inspired academic research and been the subject of a book (Kodu for Kids). Build-A-Body Overview Learn about the body's systems with this drag and drop game. Choose organs from the organ tray, and place them in their correct position within the body to create organ systems. Build-A-Body is a drag and drop game where players are tasked with assembling an organ system from a set of organs. Players may then attempt case studies where a functional problem with a system must be linked to the organ affected.

Frederic: Resurrection of Music on Steam BEFORE YOU POINT OUT MY TIME PLAYED: I've played much more of this game on a tablet. My review for the PC version will be based on the difference in playability between the two. I've played enough to come to a conclusion about that. Cool Math Games - Free Cool Math Games, Addicting Games. Maze 4 182 Played0 Likes 28 Levels of awesomely addictive fun as you battle to the top of the leaderboards by navigating the pinball to the finish whilst avoiding gun-turrets, spinning blades, moving platforms and much, much more Mini scientist