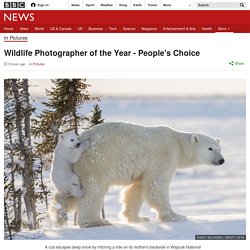 Taken by Daisy Gilardini, from Switzerland, the photo is one of 25 shortlisted for the People's Choice Award in the latest Wildlife Photographer of the Year Competition - on show now at the Natural History Museum in London. Scroll down to see all 25 images, pre-selected by the museum from almost 50,000 submissions from 95 countries. A mother's hand Alain Mafart Renodier, France Image copyright Alain Mafart Renodier / WPOTY 2016 Alain Mafart Renodier was on a winter visit to Japan's Jigokudani Snow Monkey Park when he took this photograph of a sleeping baby Japanese macaque, its mother's hand covering its head protectively. 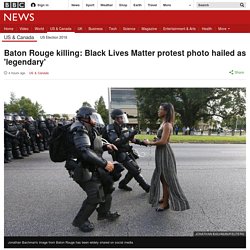 On Sunday, dozens of protesters were arrested in Baton Rouge, Louisiana, where a black man was killed by police last Tuesday. In an atmosphere of heightened racial tension, and amid growing debate over the seeming militarisation of American police, one photo has stood out. It was taken by Jonathan Bachman, a New Orleans-based photographer who has been working for Reuters in the past few days. The image shows Ieshia Evans, a young woman in a dress standing calmly in front of two police officers wearing layers of armour, and appearing to approach her in a hurry. 'I am a vessel': #BlackLivesMatter muse The photograph was taken outside the Baton Rouge police headquarters, where most of Saturday's protest was focused.

"The police were called out to clear Airline Highway where demonstrators had blocked the road... Israeli archaeologists uncover stunning 1,700-year-old mosaic. Archaeologists in Israel are showing off a newly-discovered 1,700-year old mosaic this week.

The Roman-era mosaic was excavated in central Israeli city of Lod between June and November 2014 by a team of archaeologists from the Israel Antiquities Authority. The discovery was made during the building of a visitors’ center meant to display another mosaic that was found two decades earlier at the same location. Ancient board game found in looted China tomb. Pieces from a mysterious board game that hasn't been played for 1,500 years were discovered in a heavily looted 2,300-year-old tomb near Qingzhou City in China. 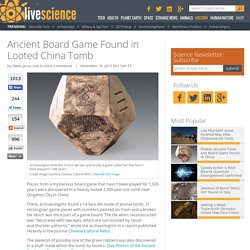 There, archaeologists found a 14-face die made of animal tooth, 21 rectangular game pieces with numbers painted on them and a broken tile which was once part of a game board. The tile when reconstructed was "decorated with two eyes, which are surrounded by cloud-and-thunder patterns," wrote the archaeologists in a report published recently in the journal Chinese Cultural Relics. The skeleton of possibly one of the grave robbers was also discovered in a shaft made within the tomb by looters. [See Photos of the Ancient Tomb and Board Game Pieces] Dead game? Twelve faces of the die are numbered 1 through 6 in a form of ancient Chinese writing known as "seal script. " The artifacts seem to be part of a game called "bo," sometimes referred to as "liubo" the archaeologists said. Massive tomb Winner takes all. Scientists explain how you should pet your cat.

7 Facts About Black Cats - Introduction. Black cats pose an enigma to people who have never been up close and personal with one. 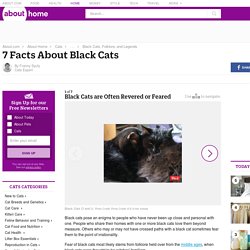 People who share their homes with one or more black cats love them beyond measure. Others who may or may not have crossed paths with a black cat sometimes fear them to the point of irrationality. Fear of black cats most likely stems from folklore held over from the middle ages, when black cats were thought to be witches' familiars. The common phrase "witch hunt" arose from the fanatical fervor with which witches and their "familiars" were searched down, tortured until they confessed their sins, and killed, usually by burning at the stake. Today, lovers of black cats bear no resemblance to witches, but are normal men and women who happen to love the stark beauty of all-black cats, along with their personalities, which seem to vary from cat to cat.

If you fit into this category, you'll have the opportunity to share with the world why you love black cats, with the link at the bottom of this series. Tiny Real-Life 'Dragon' Makes A Stunning Rare Appearance. Plenty of strange and fanciful creatures have been invented within the long tradition of lore and mythology, but few real-life beings have been so aptly named after one of those from fiction. 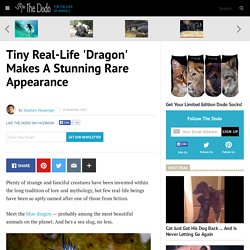 Meet the blue dragon — probably among the most beautiful animals on the planet. And he's a sea slug, no less. They may be a bit more diminutive than their namesake counterparts are imagined, measuring in at just over an inch fully grown, but this species is no less fearsome. Blue dragons ( Glaucus atlanticus) spend their lives floating upside down in warm ocean currents, attacking their prey with a powerful venom from their wing-like appendages. Their sting is so deadly, in fact, that they're known to take down other venomous marine animals, like the Portuguese man-o-war.