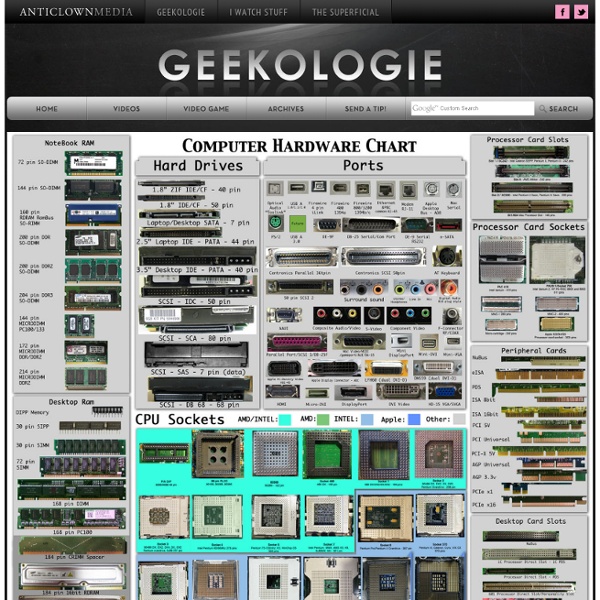 Win 7 DoS by RA Packets Added 9-15-2011: Win 8 Developer Preview is also vulnerable Added 5-30-2011: RA Guard Evasion Added 5-29-2011: FreeBSD is also vulnerable! Change the Windows 7 Login Screen Background Image When you login to your Windows 7 computer (assuming you haven’t used something like this tutorial to turn on automatic login), you’ll generally see a login window with a background looking something like this. It’s fine; there’s nothing wrong with it. But sometimes a change is good so in this article we’ll show you how to change the background image behind the login screen to anything you want. The first step is to open up the Start Menu by clicking the orb in the lower left corner of the screen. Now, in the Start Menu search box, type regedit, to open up the Registry Editor.

Future proof » Tim’s laptop service manuals Have you come to this webpage looking for Toshiba laptop service manuals? Please read this. Introduction 64 Things Every Geek Should Know If you consider yourself a geek, or aspire to the honor of geekhood, here’s an essential checklist of must-have geek skills. The term ‘geek’, once used to label a circus freak, has morphed in meaning over the years. What was once an unusual profession transferred into a word indicating social awkwardness. 30 Fantastic Geeky Tricks to Get The Most From Your Mac If you’re one of those Mac users that loves to dig in and play with hidden features and settings, this post is for you. Below you’ll find 30 tips and tricks to help both seasoned and beginner Mac users to get the most out of their OS X experience. We’ll cover everything from obscure Terminal commands to keyboard shortcuts that every Mac user should know and use.

Five Geek Social Fallacies Within the constellation of allied hobbies and subcultures collectively known as geekdom, one finds many social groups bent under a crushing burden of dysfunction, social drama, and general interpersonal wack-ness. It is my opinion that many of these never-ending crises are sparked off by an assortment of pernicious social fallacies -- ideas about human interaction which spur their holders to do terrible and stupid things to themselves and to each other. Social fallacies are particularly insidious because they tend to be exaggerated versions of notions that are themselves entirely reasonable and unobjectionable. It's difficult to debunk the pathological fallacy without seeming to argue against its reasonable form; therefore, once it establishes itself, a social fallacy is extremely difficult to dislodge. It's my hope that drawing attention to some of them may be a step in the right direction.

15 Ways To Create Website Screenshots Taking screenshots of web sites is probably one of the most commonly done tasks on the internet - doubly so if you have a blog or work as a journalist. This week, we wrote about Thumbalizr, a service that lets you take screenshots of websites. However, there are several other tools for easy screenshot capturing - some standalone and some in the form of a browser plugin. Plugins Save as image - an aptly named Firefox plugin that lets you save a page, frame, or part of either as an image directly from Firefox. How to hide files in JPEG pictures If you’re looking to hide files on your PC hard drive, you may have read about ways to encrypt folders or change the attributes on a file so that they cannot be accessed by prying eyes. However, a lot of times hiding files or folders in that way requires that you install some sort of software on your computer, which could then be spotted by someone else. I’ve actually written quite a few articles on how you can hide files and folders in Windows XP and Vista before, but here I’m going to show you a new way to hide files that is very counter-intuitive and therefore pretty safe!

Top 10 Geek List This is the mother of all top 10 geek lists. We just scoured around and put together a list of all the Top 10 stuff you would find interesting. Starting first with our own Top 10 Geek Movies. Top 10 Geek Movies JBIG JBIG is based on a form of arithmetic coding patented by IBM, known as the Q-coder, but using a minor tweak patented by Mitsubishi, resulting in what became known as the QM-coder. It bases the probabilities of each bit on the previous bits and the previous lines of the picture. In order to allow compressing and decompressing images in scanning order, it does not reference future bits. JBIG also supports progressive transmission with small (around 5%) overheads.

The Geek’s Guide to Getting Almost Anything for Free Does it pay to be Internet savvy? Yes. In more ways than many people imagine. Sure, the Internet is a great way to research just about anything you could ever want to know about; and it’s an outstanding communication, marketing, and entertainment tool. TextCrawler - Seach and Replace Files The Text File Toolkit Find and Replace across multiple files and folders. Copes with simple phrases and complex Regular Expressions. Save regularly used phrases in the library. Batch processing 70 Things Every Computer Geek Should Know. The term ‘geek’, once used to label a circus freak, has morphed in meaning over the years. What was once an unusual profession transferred into a word indicating social awkwardness. As time has gone on, the word has yet again morphed to indicate a new type of individual: someone who is obsessive over one (or more) particular subjects, whether it be science, photography, electronics, computers, media, or any other field. A geek is one who isn’t satisfied knowing only the surface facts, but instead has a visceral desire to learn everything possible about a particular subject. A techie geek is usually one who knows a little about everything, and is thus the person family and friends turn to whenever they have a question. If you’re that type of person and are looking for a few extra skills to pick up, or if you’re a newbie aiming to get a handhold on the honor that is geekhood, read on to find out what skills you need to know.

# Send Files to Any Email Address Directly from Windows Explorer If you send lot of files to your friends as email attachments, you can avoid the hassle of uploading files. Though Gmail supports drag drop, you can choose to email a file directly by right clicking on the file or document. Users who need to frequently send emails with attached files, will know that this is a very simple procedure, but doing it repeatedly can be quite tedious. An application called developed by TheWindowsClub will simplify this task. This free tool lets you send files by email from a friendly context menu without opening a client application.