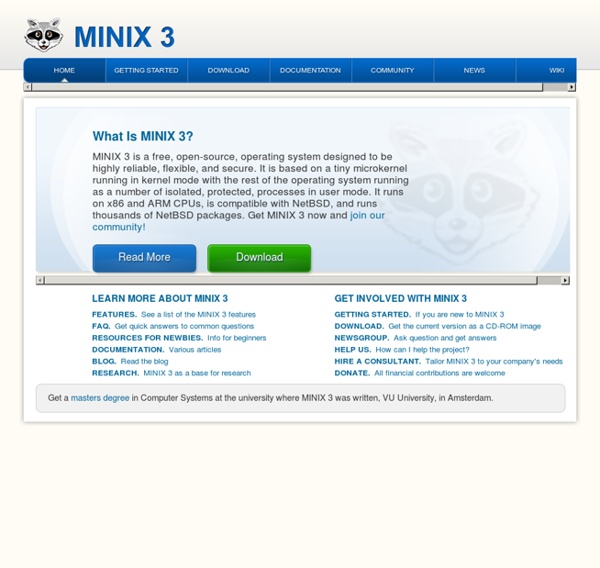 Syllable There are four ways to try Syllable: Syllable Desktop is a graphical system that runs on standard Personal Computers and is easy to operate. If you just want to try it out, the best way to do that is to use the Live CD. This is a good way to experience how Syllable runs on your computer and to check if your hardware is supported. It is also a good way to use Syllable once in a while and to take it with you to other computers.

ASIMO Development history[edit] P3 model (left) compared to ASIMO Honda began developing humanoid robots in the 1980s, including several prototypes that preceded ASIMO. It was the company's goal to create a walking robot which could not only adapt and interact in human situations, but also improve the quality of life. The E0 was the first bipedal (two-legged) model produced as part of the Honda E series, which was an early experimental line of humanoid robots created between 1986 and 1993. DCS: Anonymization API In this page you can find AnonTool, an open-source implementation of Anonymization API. You can download the distribution (version 1.5) from here. This release is stable enough and has been tested in Debian systems. The distribution comes with a set of ready-to-use applications for anonymization of Netflow (v5 and v9) traces (recorded in tcpdump format) as well as a general tool for anonymizing any tcpdump trace.

Quirky Quirky is a Linux distribution and is in the "Puppy Linux family", also known as a "puplet". However, Quirky is not a mainline Puppy release -- it is a distinct distro in its own right. Quirky is built with the Woof build system, as is Puppy 4.3.x and later official puppies. Quirky is my plaything, an avenue for me to try out some quirky ideas -- hence the name "Quirky". My blog has a "Quirky" category, so you can go there for the latest quirky news: Quirky ideas Android (operating system) Android is an operating system based on the Linux kernel,[12] and designed primarily for touchscreen mobile devices such as smartphones and tablet computers. Initially developed by Android, Inc., which Google backed financially and later bought in 2005,[13] Android was unveiled in 2007 along with the founding of the Open Handset Alliance—​a consortium of hardware, software, and telecommunication companies devoted to advancing open standards for mobile devices.[14] The first publicly available smartphone running Android, the HTC Dream, was released on October 22, 2008.[15] The user interface of Android is based on direct manipulation, using touch inputs that loosely correspond to real-world actions, like swiping, tapping, pinching, and reverse pinching to manipulate on-screen objects. History Features

De-identification: software and test data The deid software package includes code and dictionaries for automated location and removal of protected health information (PHI) in free text from medical records. The gold-standard corpus is a collection of deidentified nursing notes that have been reidentified with realistic surrogate data, for use in developing and evaluating software such as deid. For additional discussion of the methods used by the software described here, see YellowDog What is Yellow Dog Linux? An open source, Linux operating system for home, office, server, and cluster users. Built upon the RHEL/CentOS core, Fixstars has since the spring of 1999 developed and maintained YDL for the Power architecture family of CPUs. This focus and dedication has lead to the world's leading Linux for the Power architecture. What is included? Yellow Dog Linux combines a no non-sense graphical installer with support for a wide range of Power hardware, leading (but not bleeding) edge kernels and stable, functional compilers for code development.