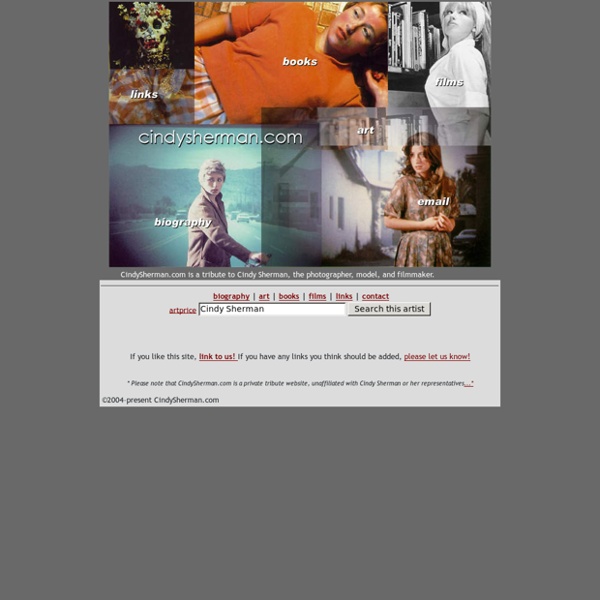 The Ugly Beauty of Cindy Sherman’s Instagram Selfies Mimicry in nature was first observed in butterflies, in the 19th century. Certain breeds pose as wasps; others bear marks falsely advertising that they are poisonous. Desire for survival alone couldn’t account for the freakishness of camouflage. The novelist Vladimir Nabokov reported on butterflies so creatively exuberant that when masquerading as leaves, they imitated the small holes chewed by grubs. What predator could appreciate such subtlety? SITE OFFICIEL D'ORLAN Biographie en français BIOGRAPHY, AWARDS & GRANTSDownload ORLAN’s full CV SUMMARY1. diter roth British artist Tania Kovats makes drawings, sculpture, installations and large-scale time-based projects exploring our experience and understanding of landscape. She is best known for Tree (2009), a permanent installation for the Natural History Museum in London; and Rivers, an outdoor sculpture in the landscape of Jupiter Artland outside Edinburgh. This new exhibition focuses on her fascination with the sea. A highlight of the exhibition is All the Sea, an ambitious new work which presents water from all the world’s seas, collected with the help of a global network of people drawn in by the idea of bringing all the waters of the world to one place. It is joined by new and existing work all of which has to do in some way with the sea. Exhibition supported by

Why Cindy Sherman Thinks Selfies Are a Cry for Help For a woman whose career has been built on self-portraits, Cindy Sherman is barely recognizable. In the flesh, the MacArthur Fellowship–winning photographer looks too friendly, too nice to be the same face that stares out from harshly manipulated self-portraits (whatever you do, don’t call them selfies) depicting scary clowns, aging flappers, royalty from old master paintings, society ladies and even creepy social media influencers. When Nicolas Ghesquière, creative director of Louis Vuitton’s women’s collections, first met Sherman, he was shocked by the disparity.

CHRISTO ET JEANNE-CLAUDE Chief Engineer and Director of Construction: Vince Davenport Project Director: Jonita Davenport On November 7, 2011, the US Department of the Interior announced its Record of Decision, giving Christo the necessary federal permit to realize Over The River, Project for the Arkansas River, State of Colorado. This federal action was the final step of an Environmental Impact Statement (EIS), which is usually reserved for major infrastructures such as bridges, highways, dams and airports.

Rick Poynor Rick Poynor is a writer, critic, lecturer and curator, specialising in design, media, photography and visual culture. Much of his writing has concentrated on alternative and self-directed forms of design practice, and he has a special interest, as both practitioner and enabler, in the development of design writing and criticism. He was the founding editor of magazine and is now its writer at large. He is a columnist and contributing editor for magazine in New York. He was a cofounder of the website, where he writes regularly.

Artiste transmédia et féministe. Météorite narratif du BIO ART. Son oeuvre questionne le statut du CORPS dans la société. Ses sculptures, HYBRIDATIONS et autoportraits réinterprètent le rôle des nouvelles technologies. Exhibition : from the 7th of June to the 22th of September 2013 The Collection as a Character M HKA, Antwerp, Belgium Cindy Sherman: ‘I enjoy doing the really difficult things that people can’t buy’ Perhaps the most intriguing exhibit in Cindy Sherman’s forthcoming retrospective at the National Portrait Gallery is the first, Cindy Book, a family photo album she began making when she was just six years old. It comprises 26 snapshots pasted on pages torn out of a school exercise book and placed inside stapled-together plain covers that are now stained and discoloured with age. For all sorts of reasons, it is a good place to start. There is no artifice in the actual photographs. They trace ordinary moments in Sherman’s early life from infancy to adolescence: cute baby pics, family gatherings, snaps of her as a child at the beach and portraits of her as a teenager standing gauchely alongside awkward young men. What is striking is the sense of an almost stereotypical all-American suburban childhood.

Jacques Derrida Jacques Derrida (/ʒɑːk ˈdɛrɨdə/; French: [ʒak dɛʁida]; born Jackie Élie Derrida;[1] July 15, 1930 – October 9, 2004) was a French philosopher, born in French Algeria. Derrida is best known for developing a form of semiotic analysis known as deconstruction. He is one of the major figures associated with post-structuralism and postmodern philosophy.[3][4][5] During his career Derrida published more than 40 books, together with hundreds of essays and public presentations. Six things you might not have known about photographer Cindy Sherman’s work As the American photographer’s retrospective opens in London, we speak to curator Paul Moorhouse about the elusive artist and her extensive oeuvre In 2011, a print of a photograph by Cindy Sherman sold at a New York auction for $3.89 million. Shot in 1981 as an Artforum magazine commission, “Untitled #96” was the most expensive photograph ever sold at the time. But the American photographer’s images were not always so popular. Back in the 80s, a lot of her commissioned work (including the Artforum three-million-dollar-photograph) was never published for fear that people would not understand it. Ambiguity – the quality of having more than one possible meaning and therefore causing uncertainty – is central to Sherman’s work.

So Cindy Sherman is my favourite visual artist. I spent years surrounded by photographers but none of them had a jot of her talent. by panzertanzer Mar 4