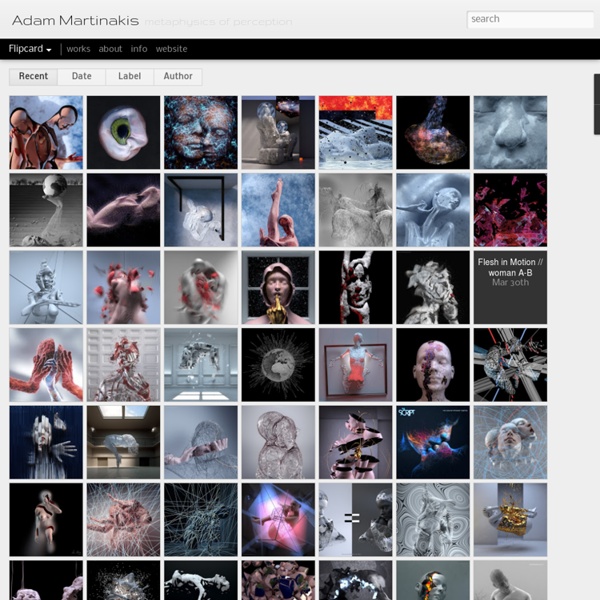 The Surreal Art Of Erik Johansson September 13, 2012 | No Comments » | Topics: Photography ( via ) Loading ... Hot Stories From Around The Web I Turn Paper Into Wedding Dresses Based On Different Nationalities I am an artist and my material is an ordinary paper. Once I was approached by a brand of underwear in order to make image-shooting for wedding clothes. Wedding suit should hide the bride from the groom in almost all the cultures. In some countries it closes not only the body but also the face completely. Steampunk Star Wars Illustrations by Björn Hurri Concept artist and illustrator Björn Hurri has been releasing a series of steampunk illustrations as a tribute to Star Wars. Björn is currently working in the entertainment industry as Lead Artist for Opus Artz. Link: www.bjornhurri.com All images used with permission by the artist. © Björn Hurri or their respective copyright holder.

Chris Jordan Exploring around our country's shipping ports and industrial yards, where the accumulated detritus of our consumption is exposed to view like eroded layers in the Grand Canyon, I find evidence of a slow-motion apocalypse in progress. I am appalled by these scenes, and yet also drawn into them with awe and fascination. The immense scale of our consumption can appear desolate, macabre, oddly comical and ironic, and even darkly beautiful; for me its consistent feature is a staggering complexity.

Land Art Germany based artist Walter Mason has an affinity for pulling things apart and then putting them back in to place – but in a subtly changed way. Chunks of ice can become upended, forming a chilly henge, elm leaves are stitched together then allowed to float away on the stream. Beech leaves, torn asunder, find a new home on a lily leaf. Yet the result is something quite extraordinary – intriguing but temporary, organic art which is recorded for posterity only on camera. Following very much in the land art tradition, you can see more examples of Mason’s ingenious art at his Flickr photostream and on his tumblr page.

Insa Brings Armageddon To Los Angeles In His Latest GIF-iti Only last week we were discussing the digitalization of graffiti and street art from a new generation of artists who are embracing the internet not only as a medium to showcase, but also augment their work. One of the artists we called out was Insa and his GIF-iti art, where he creates eye-catching designs on the street and turns them into animated GIFs. His latest one is a collaborative piece with Stanley Donwood called Hollywood Dooom and was made to celebrate the release of Atoms For Peace‘s (the supergroup featuring Thom Yorke and Flea, among others) debut album AMOK. Insa painted Donwood’s apocalyptic album artwork on XL’s offices in L.A., using his painstaking repainting technique to bring the black and white scenes, depicting the end of days for Hollywood, to life. Here’s what Insa says about the piece, which you can check out below:

Culture - The great women artists that history forgot “Why have there been no great women artists?” the feminist art historian Linda Nochlin famously asked in her landmark 1971 essay. The point was of course that there had been, but centuries of misogyny in the art world meant if you looked at museum collections and exhibition programmes you really wouldn’t know it. Things are still far from perfect but a number of recent exhibitions have been giving some truly great artists their long overdue public recognition. 25 Awesome Adobe Photoshop Design Masterpieces for your inspiration MTV Coca cola 30 razones - Inspiring 3D Animation video VODAFONE Christmas Movie - 3D Animated TV Commercial 2 - Vancouver Film School (VFS)