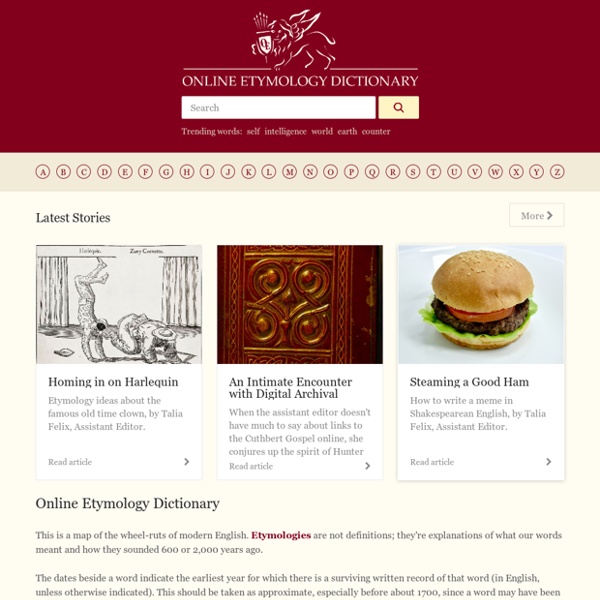 Links for translators The resources on this page are all available free (or in free versions) on the Internet. General Dictionaries Cambridge The suite of Cambridge dictionaries are possibly the best online English-English dictionaries available (and with nearly 2m searches a month, among the most popular). Predicting what extra-terrestrials will be like: and preparing for the worst 1. Introduction ‘Astrobiology is the study of things that do not exist.’ This well-known statement can be dismissed as flippant cynicism, but one might suggest that in its vernacular way it is struggling to grasp what on earth (so to speak) we might expect to find. Consider the presumed alternatives: will the extra-terrestrials be utterly familiar, completely alien (whatever that is supposed to mean) or is the search a complete waste of time? What will it be?

APA Style: Learning APA Style The Basics of APA Style: Tutorial Free | This free tutorial is designed for those who have no previous knowledge of APA Style. It shows users how to structure and format their work, recommends ways to reduce bias in language, identifies how to avoid charges of plagiarism, shows how to cite references in text, and provides selected reference examples. Basics of APA Style: In-Depth Online Course $80 ($60 for APA members) | Learn to apply the basic rules of APA Style in writing term papers, research reports, and journal articles. Contact Languages Are Dying Out When groups of people who speak different languages come together, they sometimes inadvertently create a new one, combining bits of each into something everyone can use to communicate easily. Linguists call such impromptu tongues “contact languages” — and they can extend well beyond the pidgin and creole that many of us have heard of. The origin stories of these linguistic mash-ups vary. Some are peaceful, such as when groups meet for trade and need a lingua franca: Nigerian Pidgin English, for example, allows speakers of over 500 tongues to communicate.

it's NOT about what the teacher does with technology Bruce Springsteen: "When we kiss…" Not just going through the motions! You could probably say I've had four different though overlapping careers — in language teaching, language teacher training, technology and ELT management. The first of those I retired from (after 35+ years) a few months ago, though the number of contact hours I was doing was limited; teacher training I'm retiring from at the end of this month; management I got fired from (to the relief of all involved!) many years ago; which leaves only another 10 or so years in technology to do (I'm only (?) 57, so it ain't over yet!). I happened to mentioned this in a session a couple of weeks ago and someone (Mati?)

How do fireflies light up Fireflies or lightning bugs make light within their bodies. This process is called bioluminescence and is shared by many other organisms, mostly sea-living or marine organisms. Fireflies light up to attract a mate. To do this, the fireflies contain specialized cells in their abdomen that make light. The cells contain a chemical called luciferin and make an enzyme called luciferase. SUNY Empire State College The writing process is never done--it is only finished when you need to hand something in or voluntarily discontinue working. If you were to pick up a piece of writing that you completed two years ago, you undoubtedly would see ways that you could improve it. Two years later, you could do the same thing. Because perspectives on life and the world are always changing (even if we don't notice it), we will always look at our writing differently.

'Invisible' words reveal common structure among famous stories Aug. 7 (UPI) -- Storytelling requires a narrative arc, but the trajectory of a dramatic arc isn't always obvious. By tracing the abundance of "invisible" words -- pronouns, articles and other short words -- researchers were able to identify patterns shared by a diversity of stories, from Shakespeare to Spielberg, according to a study published Friday in Science Advances. "Over the years, these 'invisible' words have been found to be related to a whole mess of psychological processes -- how people use small words like articles and pronouns tell us about a person's mental health, thinking style, their social status, and even how well they get along with other people," study lead author Ryan Boyd told UPI. "In many ways, it was a natural progression to look at what these words can tell us how the nature of stories," said Boyd, a lecturer in behavioral analytics at the University of Leeds. During the third phase, cognitive tension is ramped up as the narrative arc reaches a climax.

10 words that once meant something very different. – The Language Nerds Language belongs to us and we do with it what we please. We invent new words, new spellings and sometimes whole new languages. When it comes to words, we decide what they mean and we change their meanings at will. That’s what English speakers did to the words below. English teachers, are you asking the right questions? Declan Cooley, CELTA Opens in a new tab or window. trainer at the British Council in Poland, explains why some questions are not as effective as they first appear, and offers some alternatives. Questions of all kinds are a teacher's most basic tools for generating interest, provoking thoughts, encouraging students to speak, developing text comprehension skills and checking understanding. New teachers on courses like the CELTA spend a lot of time honing their skills at using effective questions in the classroom.

How Incomprehensible Could Extraterrestrials Be? A few days ago Paul Gilster, the author of Centauri Dreams: Imagining and Planning Interstellar Exploration and the curator of Centauri Dreams , posted a thoughtful discussion of a blog entry I wrote (titled What's The Connection Between Deafness and SETI? ) His discussion and the resulting comments were fascinating, and in this post I want to carry on that conversation.

SUNY Empire State College Tip: After you have completed the body of your paper, you can decide what you want to say in your introduction and in your conclusion. Explanation Once you know what you want to talk about and you have written your thesis statement, you are ready to build the body of your essay. The thesis statement will usually be followed by: Chapter 1: Thinking Like a Linguist – Essentials of Linguistics In this chapter, we begin to consider the ways that linguists think about language, especially the idea that linguists strive to make systematic observations of human language behaviour. Linguists don’t spend time prescribing how people should or shouldn’t use their language! One of the challenges of observing how humans use language is that a lot of what we do with language happens in our minds. Of course, it’s relatively simple to observe the words that we speak or write, but it’s much harder to observe the processes that unfold in someone’s mind when they’re listening to someone speaking, understanding them, and thinking up a reply. Part of learning to do linguistics is learning some of the techniques linguists have for drawing conclusions about these mental processes. In Chapter 1 we also discuss the fundamental attributes of human language and discover the five core components that make up the grammar of every human language.

I use this with my Y6 high achieving spellers. They use it to extend their vocabulary and discover word links. I will have a look at wordreference.com too, thanks. by bulamanka Apr 4

I enjoy looking at word origins and try to instill the same enthusiasm in my students. Glad you like it. by cyns Apr 3