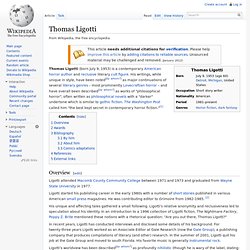 His writings, while unique in style, have been noted[by whom?] As major continuations of several literary genres – most prominently Lovecraftian horror – and have overall been described[by whom?] As works of "philosophical horror", often written as philosophical novels with a "darker" undertone which is similar to gothic fiction. The Washington Post called him "the best kept secret in contemporary horror fiction. Overview[edit] Ligotti attended Macomb County Community College between 1971 and 1973 and graduated from Wayne State University in 1977. Ligotti started his publishing career in the early 1980s with a number of short stories published in various American small press magazines. His unique and affecting tales gathered a small following. In recent years, Ligotti has conducted interviews and disclosed some details of his background. Download free Fiction, Health, Romance and many more books. 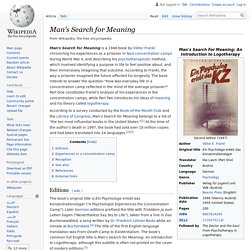 "[1] At the time of the author's death in 1997, the book had sold over 10 million copies and had been translated into 24 languages.[2][3] Editions[edit] The book's original title in German is ...trotzdem Ja zum Leben sagen: Ein Psychologe erlebt das Konzentrationslager: that is, "...To Nevertheless Say 'Yes' to Life: A Psychologist Experiences the Concentration Camps".

The title of the first English-language translation was From Death-Camp to Existentialism. Experiences in a concentration camp[edit] Frankl concludes that the meaning of life is found in every moment of living; life never ceases to have meaning, even in suffering and death. ... His concluding passage in Part One describes the psychological reaction of the inmates to their liberation, which he separates into three stages. About Face: Odyssey Of An American Warrior by David H. Hackworth. 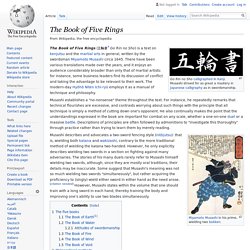 , Go Rin no Sho) is a text on kenjutsu and the martial arts in general, written by the swordsman Miyamoto Musashi circa 1645. There have been various translations made over the years, and it enjoys an audience considerably broader than only that of martial artists: for instance, some business leaders find its discussion of conflict and taking the advantage to be relevant to their work. The modern-day Hyōhō Niten Ichi-ryū employs it as a manual of technique and philosophy. Musashi establishes a "no-nonsense" theme throughout the text. For instance, he repeatedly remarks that technical flourishes are excessive, and contrasts worrying about such things with the principle that all technique is simply a method of cutting down one's opponent. Musashi describes and advocates a two-sword fencing style (nitōjutsu): that is, wielding both katana and wakizashi, contrary to the more traditional method of wielding the katana two-handed. The five books[edit] Audiobook Torrent Download, Free Unabridged Audio Books.

Watch I Wonder by Annaka Harris Online. If you read only one Alan Moore Jerusalem interview, make it this one. Alan Moore, where his childhood home in Northampton’s Boroughs once stood. 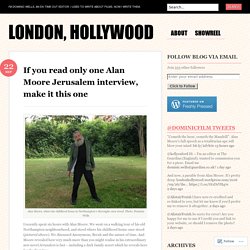 Photo: Dominic Wells I recently spent six hours with Alan Moore. We went on a walking tour of his old Northampton neighbourhood, and stood where his childhood home once stood (pictured above). We discussed Anonymous, Brexit and the nature of time. And Moore revealed how very much more than you might realise in his extraordinary new novel Jerusalem is fact – including a dark family secret which he reveals here for the first time. This is a longish feature. Watchmen is nearing the middle of its 12-issue run. “It’s about time people stopped debating whether comics are art,” Moore tells me combatively, “and just get on with making good art.” In the issue of Watchmen just published when we speak in 1986, a nuclear scientist acquires superpowers and becomes “Doctor Manhattan”. So instead, Moore’s superhuman drifts existentially out of our orbit – indeed, outside of conventional chronology altogether. Page from Watchmen. Amazon. Bibliotheca Universalis. Libros TASCHEN.