10 words that do not mean what you think they mean. – The Language Nerds. Words can be deceiving sometimes, especially that the English language, or any language for that matter, is always evolving. 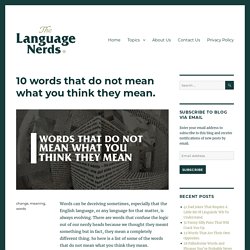 There are words that confuse the logic out of our nerdy heads because we thought they meant something but in fact, they mean a completely different thing. So here is a list of some of the words that do not mean what you think they mean. Bemused If you think bemused means the same thing as amused, you’re absolutely wrong. And if you are someone who is reading this for the first time, you might be confused. Disinterested Disinterested does not mean uninterested, at all.

Electrocute Ever accidentally stick your finger in an electrical outlet and get electrocuted? Factoid Factoid is not synonymous with fact. Nonplussed This is a word that is often misused because of its deceptive nature. Plethora Plethora does not mean a ‘lot of’. Peruse We often hear people saying they are perusing a newspaper or a magazine in the sense that they are browsing it.

Regularly Luxuriant Refute. 24 Things Most People Think Are The Same But They Are Actually Different. – The Language Nerds. Sometimes similarities may lead us to think that certain things are identical and therefore we tend to give them the same names. 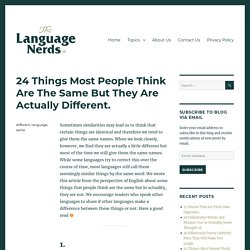 When we look closely, however, we find they are actually a little different but most of the time we still give them the same names. While some languages try to correct this over the course of time, most languages still call these seemingly similar things by the same word. We wrote this article from the perspective of English about some things that people think are the same but in actuality, they are not. We encourage readers who speak other languages to share if other languages make a difference between these things or not. Have a good read Read next. European word translator: an interactive map showing "school" in over 30 languages.

Enter one or two lower-case English words to see translations from Google Translate. 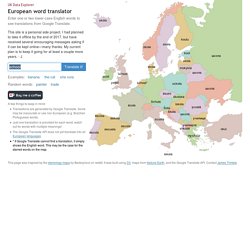 This site is a personal side project. I had planned to take it offline by the end of 2017, but have received several encouraging messages asking if it can be kept online—many thanks. My current plan is to keep it going for at least a couple more years. - J Examples: banana the cat she runs Random words: painter trade A few things to keep in mind: Words that people use which don’t exist. – The Language Nerds. Ever wonder if all the words people use are words that actually exist? 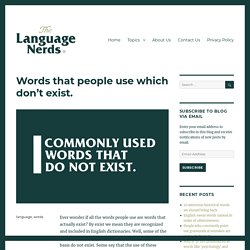 By exist we mean they are recognized and included in English dictionaries. Well, some of the words that people confidently use on a day-to-day basis do not exist. 10 words that once meant something very different. – The Language Nerds. Language belongs to us and we do with it what we please. 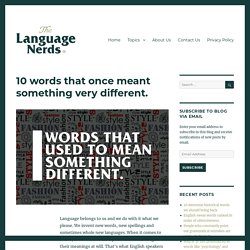 We invent new words, new spellings and sometimes whole new languages. When it comes to words, we decide what they mean and we change their meanings at will. That’s what English speakers did to the words below. They used to mean something then took a semantic detour. Let’s find them out. Nice This is a beautiful word. Awful When you deconstruct the word awful you get the meaning: “something worthy of awe.” The meanings and origins of English Phrases and Sayings. Words of the World by The University of Nottingham. 25 Sports Phrases You Might Hear as Workplace Jargon. Dygna på Engelska, översättning, Svenska-Engelska Ordbok. Metaphors.com - A Big List of Metaphors And What They Mean. WILD application. Image Dictionary. Lingro: The coolest dictionary known to hombre! Free English Dictionary and Thesaurus. Video Dictionary: Vidtionary. 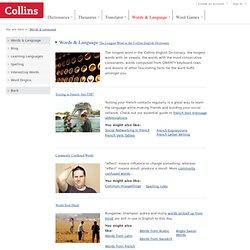 Texting in French: 6né FDS? Texting your French contacts regularly is a great way to learn the language while making friends and building your social network. Check out our essential guide to French text message abbreviations. Commonly Confused Words "Affect" means influence or change something, whereas "effect" means result; produce a result. Words from Hindi Bungalow, shampoo, pukka and many words picked up from Hindi are still in use in English to this day. Cricket image courtesy of Dana Ward / Shutterstock.com. Spanish Expressions - Senses Working Overtime A trip to Spain invariably sends the senses into overdrive. . © Collins 2014.