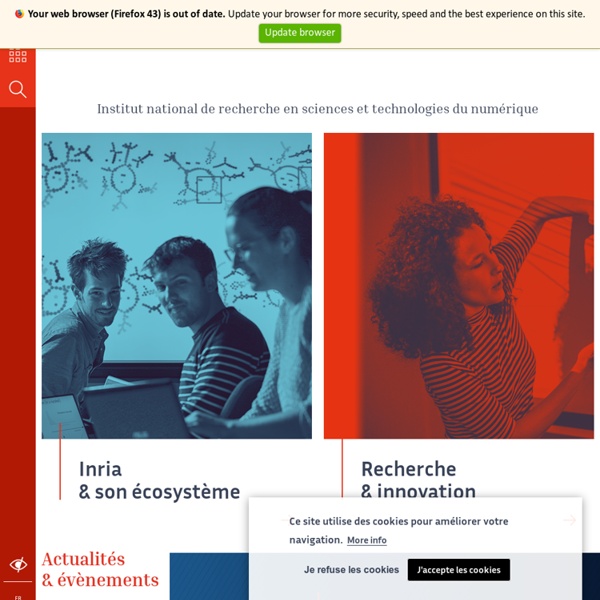 40 maps that explain the world By Max Fisher By Max Fisher August 12, 2013 Maps can be a remarkably powerful tool for understanding the world and how it works, but they show only what you ask them to. So when we saw a post sweeping the Web titled "40 maps they didn't teach you in school," one of which happens to be a WorldViews original, I thought we might be able to contribute our own collection. Some of these are pretty nerdy, but I think they're no less fascinating and easily understandable. Envisioning Technology 2012 What is the visualization? Understanding where technology is heading is more than guesswork. Looking at emerging trends and research, one can predict and draw conclusions about how the technological sphere is developing, and which technologies should become mainstream in the coming years.

A Famous Steve Jobs Speech Is Hidden on Your Mac Every Mac which has the Pages app for OS X installed includes a little Easter Egg that few know about; a famous Steve Jobs speech, tucked away in a little unassuming folder. Technically, it’s two different Steve Jobs speeches, the famous text from the Crazy Ones Think Different campaign, and arguably the even more famous 2005 Steve Jobs commencement speech from Stanford University. Note that you must have Pages.app installed in OS X to find the Easter Egg file, Pages is free as part of the iWork suite nowadays on new Macs, and older versions can upgrade to the latest versions for free.

Envisioning Technology 2011 We've just released our newest work. A technological study on the Future of Money. Click here to find out more. A Third Generation of Innovation Arla Foods has transformed itself from a regional dairy cooperative into Europe’s second largest milk producer. Headquartered in Denmark, Arla Foods is the result of a historic merger between the Danish company MD Foods and Swedish cooperative Arla in 2000. Faced with increasing competition, the two organizations merged to pursue an aggressive growth strategy to match the size and clout of international retail chains.

Forbidden acts never justified by “goodness” of intention The Fatwa on Terrorism & Suicide Bombings deals comprehensively with the core arguments that terrorists use and their tendencies to misuse Islamic teachings to defend their wrong actions. The Fatwa on Terrorism contains clear-cut rebuttals of the standard arguments made by the terrorists and goes as far as declaring those who commit terrorist acts disbelievers. The Fatwa on Terrorism clearly explains how terrorists such as the likes of Mujaahid Abu Hamza and Ismail Ibn Abdullah (formerly Michael Adebolajo and Michael Adebowale) have nothing to do with Islam or its peaceful teachings nor can their actions be defended by using any verses of the Qur’an.

Future Scenarios What Will The Internet Look Like In 10 Years? The Internet Society engaged in a scenario planning exercise to reveal plausible courses of events that could impact the health of the Internet in the future. While obviously not intended to be a definitive overview of the landscape or all potential issues, we believe the results are interesting and, we hope, thought-provoking.

Collaborative innovation network A Collaborative Innovation Network, or CoIN, is a social construct used to describe innovative teams[clarification needed]. It has been defined by the originator of the term, Peter Gloor (a Research Scientist at MIT Sloan's Center for Collective Intelligence) as "a cyberteam of self-motivated people with a collective vision, enabled by the Web to collaborate in achieving a common goal by sharing ideas, information, and work." Overview[edit] COINs feature internal transparency and direct communication. The Next Net Skip to content NOW SERVING Psychedelic Culture Menu Search Cart Facebook-f Gaga for Innovation We use cookies on our website. If you continue without changing your settings, we'll assume that you are happy to receive these cookies. To find out more about how we use cookies, see our Cookie Information page Continue Allegisgroups Blog Allegis Group Services and Talent2 Subsidiary Combine to Form Allegis Global Solutions Posted 4/8/2014 By Erik Karff Human capital management industry leader Allegis Group announced this week that it is formally combining the recruitment process outsourcing (RPO), managed services provider (MSP) and integrated talent operations of its subsidiary All...