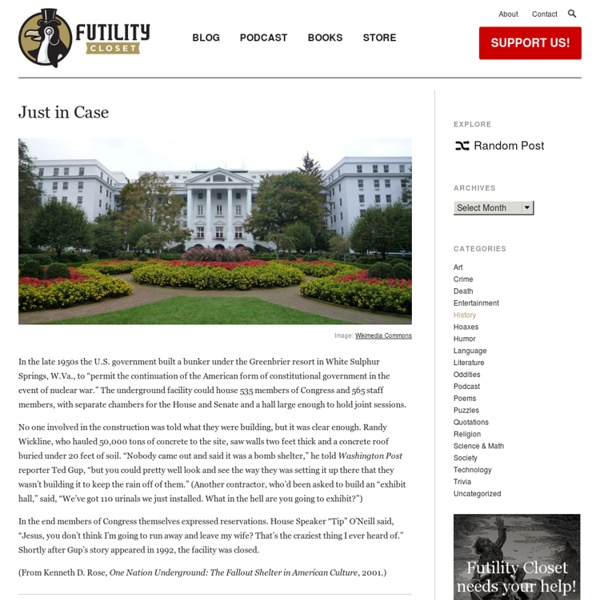 Research by E. Robert Schulman Charlottesville, Virginia Abstract We (meaning I) present observations on the scientific publishing process which (meaning that) are important and timely in that unless I have more published papers soon, I will never get another job. These observations are consistent with the theory that it is difficult to do good science, write good scientific papers, and have enough publications to get future jobs. 1.

Top 10 Secret Doorways // Inspiring Photography Here are top 10 secret doorways for your inspiration, which range from doorways in libraries to secret hidden forest lairs. Below: Image source and/or © copyright here. Above: Image source/ copyright here. Above: Image source/copyright here Above: Image source/copyright here Above: Image source/copyright here Community One of the beautiful things about StumbleUpon is how it can be so many different things for different people. A tool for some, entertainment for others – the diversity of content and what our members get out of Stumbling never ceases to amaze me. The modern woman is interested in all StumbleUpon has to offer from Aeronautics to Zoology, but sometimes you need something a little more focused. Recently our community team, with the help of some experts, pulled together some of the best content that both entertains and enlightens us on some female-centric topics (though many guys might enjoy these as well). General interests we found content around included fitness, relationships, pregnancy, being a mom, and, of course, Ryan Gosling. We then took that content and put it into Channels so you can easily Stumble the best web pages on that general theme.

Creative Food Manipulation "QUANTUM SHOT" #496link Pimp My Food!- For the sake of Art and Stomach. These wildly creative examples of artfully augmented food (that anybody can make, provided they got Michelangelo's sculpture skills and nearly limitless free time) can be then displayed in upscale New York art galleries (until they go bad) and bring their creators untold riches and client commissions. 10 Most Bizarre Cargo Spills Tons of Mackerel A truck full of fish overturned and dumped its load into Northern Ireland farmer, Gordon Flinn's, field in January 2012. The tons of mackerel were piled two feet deep in places. The driver of the truck was taken to the hospital, but was not seriously injured and was able to return to the scene.

The Greatest List of The Coolest Ice Cubes around Some of my favorite things are so simple, like ice cube shapes for example. Here’s a list of some of my favorite Ice Cube Trays and related inventions, not including the previously featured Global Warming Ice Cubes! If you like stuff like this join us on facebook or follow us on twitter to find more cool things and automatically enter to win awesome stuff on One More Gadget. 1.

Theta Wave Brain Synchronization & Get High Now (without drugs) This is a replication of a Theta wave entrainment rhythm first created by scientists in the 1960s to lull patients into a deep, colorful, creative dream state. Listen to it for 10 minutes, longer if you can. The longer it plays, the deeper you’ll go. So go. How It Works The human brain produces different levels of electrical activity depending on the amount of information it is processing. About Oddee Oddee®, a U.S. registered trademark, is an entertainment blog attracting 3.7 million unique visitors each month. Focused on the odd, bizarre and strange things of our world, its daily articles and sections explore subjects from Science to Advertising and Technology; over 12 million pages are read at Oddee every month. Selected by PC Magazine among its Top 100 Web Sites of 2008 & 2010, by UK’s newspaper The Guardian as one of the the 100 essential websites of 2009 and picked by AsiaOne and Boston.comas a top reference for fun online, it’s one of most influential blogs in entertainment, a true classic of the web.

UFO sightings reveal more strange metal boxes along coastal beaches As of late afternoon Feb. 8, Bill Hanshumaker, a public marine specialist and (Ph.D) doctor of marine science at the Hatfield Marine Science Center in nearby Newport, told Huliq in an interview that, “I don’t know what they are.” In turn, Doctor Hanshumaker said he’s advised “surf monitoring” about these strange metal boxes that suddenly appeared along local beaches Feb. 6, and now seem to be multiplying like Star Trek “Tribbles.” The photograph that accompanies this report – taken during the afternoon of Feb. 8 near Bray’s Point -- of yet another strange metal box stuck in the surf up is one of a possible group of a dozen or more that have been sited up and down West Coast beaches. Meanwhile, the British government also photographed similar huge metal boxes on beaches in Sri Lanka in the late 1990’s and in early 2004 and 2005. UFO history filled with “mystery boxes”