How Trigger Warnings Are Hurting Mental Health on Campus 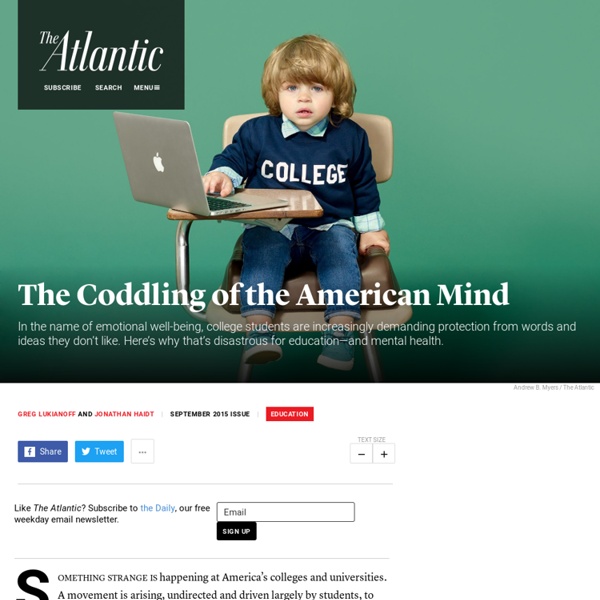 Something strange is happening at America’s colleges and universities. A movement is arising, undirected and driven largely by students, to scrub campuses clean of words, ideas, and subjects that might cause discomfort or give offense. Last December, Jeannie Suk wrote in an online article for The New Yorker about law students asking her fellow professors at Harvard not to teach rape law—or, in one case, even use the word violate (as in “that violates the law”) lest it cause students distress. In February, Laura Kipnis, a professor at Northwestern University, wrote an essay in The Chronicle of Higher Education describing a new campus politics of sexual paranoia—and was then subjected to a long investigation after students who were offended by the article and by a tweet she’d sent filed Title IX complaints against her. In June, a professor protecting himself with a pseudonym wrote an essay for Vox describing how gingerly he now has to teach. How Did We Get Here? The Thinking Cure 1. 2. 3.

German Library Burns Books That Aren’t Politically Correct By Joshua Krause Most people like to believe that the West is some grand refuge of freedom and liberal democracy, and that any of the terrible things we’ve done, are all in the past. This belief especially applies to issues like censorship. The public tends to think that restricting free speech is something that prudish or narrow-minded conservatives did during the McCarthy era, or perhaps they’re reminded of the book burnings of Nazi Germany. The Startup That Wants to Cure Social Anxiety Brett Redding felt like he was out of options. “It started with little things—having trouble making eye contact,” he told me. Soon it got worse. Redding, a 28-year-old salesman in Seattle, found himself freaking out during normal, everyday conversations. He worried any time his boss wanted to talk. He would dread his regular sales calls, and the city’s booming housing market—he works in construction—seemed to make his ever-increasing meetings all the more crushing.

FBI Secrets of Establishing Rapport: Interview with FBI Veteran Robin Dreeke Even if you’re the biggest introvert in the world, Robin Dreeke can get you to talk. As a 15-year FBI veteran and lead trainer for social engineering and interpersonal skills at the agency, Dreeke is a master of establishing rapport with just about anyone, and that includes the IT guy who never looks up from his keyboard. As head of the Behavioral Analysis Program, Dreeke often is asked by companies to help their leaders better communicate with their teams and increase collaboration . Dreeke says he finds the best way to establish rapport with others is by asking himself, “What do I want the other people to tell me or do for me, for the team or for the company?” Then he contemplates this question: “Why should they do it?” “In other words, not why I think they should, but why they think they should.

How To Make Your Mind Happy: 5 Secrets To Mindfulness Sometimes it seems like your brain just sits around creating lousy feelings and worries. You want this, you’re frustrated about that, you’re annoyed about some other thing and the list never stops. And it makes it impossible to be happy. What would be nice is to have a perspective that helps your brain deal with all of these negative emotions.

Volume 14, No. 1 (Spring 2012) - Why Google Isn’t Making Us Stupid…or Smart - Chad Wellmon The Hedgehog Review: Vol. 14, No. 1 (Spring 2012) Reprinted from The Hedgehog Review 14.1 (Spring 2012). This essay may not be resold, reprinted, or redistributed for compensation of any kind without prior written permission. Harald Kautz-Vella – Black Goo, Part 1, 2, and 3. Some interesting stuff..stick with it…~TS Part 1. There are 2 forms of Black Goo, one made by the earth, and another that was landed here by intention, in a meteor swarm, 80,000 years ago. Both are sentient and are designed to create life from the materials on the planet. Where Will WeWork? In December, the Wall Street Journal reported that coworking startup WeWork had leased around 1.6 million square feet of office space in New York. This made it the fastest-growing company by footprint in New York since 2010. In the months since then, WeWork has added nearly another half-million square feet.

6 hostage negotiation techniques that will get you what you want How does hostage negotiation get people to change their minds? The Behavioral Change Stairway Model was developed by the FBI’s hostage negotiation unit, and it shows the 5 steps to getting someone else to see your point of view and change what they’re doing. It’s not something that only works with barricaded criminals wielding assault rifles — it applies to most any form of disagreement. There are five steps:

A Message to the People-Pleasers: You are not Helping Anyone. What would you say takes up the vast majority of our time—mental space and energy? Work? Parenting? Bill-paying? Maybe it’s anxiety, personal relationships or money stress? It’s likely none of those things. Information Overload Is Not a New Problem There is a wonderful essay in The Hedgehog Review about the promise and perils of information overload. Titled Why Google Isn’t Making Us Stupid…or Smart, this essay written by Chad Wellmon explores the history of information overload and explores its implications. But Wellmon also spends some time demonstrating that information overload is far from a new problem: These complaints have their biblical antecedents: Ecclesiastes 12:12, “Of making books there is no end”; their classical ones: Seneca, “the abundance of books is a distraction”; and their early modern ones: Leibniz, the “horrible mass of books keeps growing.” After the invention of the printing press around 1450 and the attendant drop in book prices, according to some estimates by as much as 80 percent, these complaints took on new meaning.