Why can’t we read anymore? 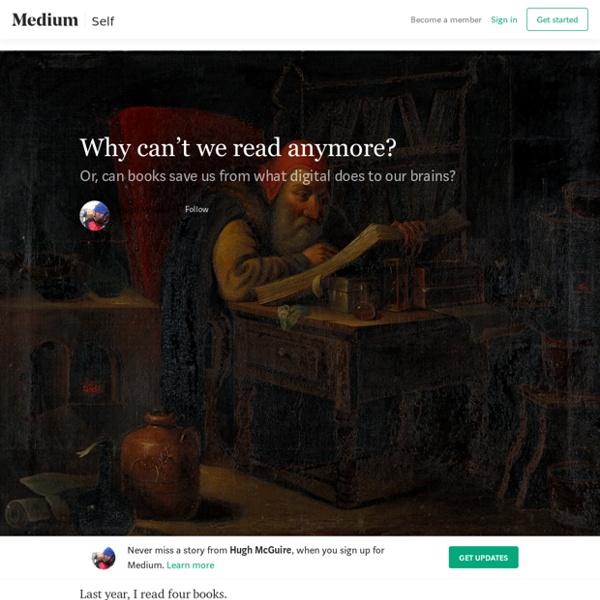 Spending time with friends, or family, I often feel a soul-deep throb coming from that perfectly engineered wafer of stainless steel and glass and rare earth metals in my pocket. Touch me. Look at me. This sickness is not limited to when I am trying to read, or once-in-a-lifetime events with my daughter. At work, my concentration is constantly broken: finishing writing an article (this one, actually), answering that client’s request, reviewing and commenting on the new designs, cleaning up the copy on the About page. All these tasks critical to my livelihood, get bumped more often than I should admit by a quick look at Twitter (for work), or Facebook (also for work), or an article about Mandelbrot sets (which, just this minute, I read). Dopamine and digital It turns out that digital devices and software are finely tuned to train us to pay attention to them, no matter what else we should be doing. So, every new email you get gives you a little flood of dopamine. How can books compete? Related:  Classroom • Social Distractions • Wise

Is Your University’s Online Course Up to Code? Thanks in part to the rise of massive open online courses, online higher ed programs are growing significantly. An estimated 5.8 million students are enrolled in online courses, the Online Learning Consortium (OLC) reports. As online teaching increases in popularity, so does the need for online faculty evaluation, reports the Conferences at New Prairie Press in a report titled “Effectively Evaluating Online Faculty”: “The quality of faculty and instruction are critical to the success of any program, and even more so in an online based program, therefore, having an effective evaluation method that functions to both evaluate and mentor those who teach in an online setting is vital to the success of the program.” Since 2010, OLC has maintained a Quality Scorecard Suite to establish benchmarking tools and standards to help schools evaluate the quality of their online courses. Evaluating an Online Course Can Breed Success

Young Delacroix on the Importance of Solitude in Creative Work and How to Resist Social Distractions by Maria Popova “Nourish yourself with grand and austere ideas of beauty that feed the soul… Seek solitude.” “One can never be alone enough to write,” Susan Sontag lamented in her journal. “People who grow bored in their own company seem to me in danger,” the great Russian filmmaker Andrei Tarkovsky admonished the young. And yet despite the vast creative and psychological benefits of boredom, we have grown so afraid of it that we have unlearned — or refused to learn altogether — the essential art of being alone, so very necessary for contemplation and creative work. The great French artist and dedicated diarist Eugène Delacroix (April 26, 1798–August 13, 1863) examined this paradox with enormous elegance and prescience two centuries before our present epidemic of compulsive sociality and allergy to solitude. Eugène Delacroix, self-portrait, 1837 Poor fellow! By the end of March, he is fully consumed by the polarizing pull of these conflicting needs for sociality and solitude.

Is ignorance bliss? Q&A: Education Technology Expert On Teaching the Next Generation of Teachers As an instructor in the University of Wisconsin-Platteville’s School of Education, Jessica Brogley is teaching the next generation of teachers — those who will carry forward the continuous transformation of pedagogy. Brogley is also the assessment, technology and literacy support specialist for Platteville Public Schools; a Google for Education Certified Trainer and Innovative Educator; and a blogger, speaker and trainer. She spoke with EdTech Managing Editor Amy Burroughs about the ways classroom technology is expanding opportunities to teach and learn. EDTECH: What are the biggest changes you’ve seen in educational technology in your 15 years in the field? BROGLEY: When I started teaching, we used the internet to consume information, but it’s now a tool for making things. EDTECH: How does classroom technology influence the role of educators? BROGLEY: Teachers have to be intentional to stay current with learning technology. The lesson design comes first, the technology second.

Mental Toughness and the "Marathon Monks" In the northeastern hills outside Kyoto, Japan there is a mountain known as Mount Hiei. That mountain is littered with unmarked graves. Those graves mark the final resting place of the Tendai Buddhist monks who have failed to complete a quest known as the Kaihogyo. What is this quest that kills so many of the monks? Keep reading and I’ll tell you. The Marathon Monks The Tendai monks believe that enlightenment can be achieved during your current life, but only through extreme self–denial. For the Tendai, the ultimate act of self–denial — and the route to enlightenment — is a physical challenge known as the Kaihogyo. But the Kaihogyo is much more than a marathon. The Kaihogyo The Kaihogyo is a 1,000 day challenge that takes place over seven years. If a monk chooses to undertake this challenge, this is what awaits him… During Year 1, the monk must run 30 km per day (about 18 miles) for 100 straight days. During Year 2, the monk must again run 30 km per day for 100 straight days. Day 101 1. 2. 3.

Why you think you’re right, even when you’re wrong Anna Parini Imagine for a moment you’re a soldier in the heat of battle — perhaps a Roman foot soldier, medieval archer or Zulu warrior. Regardless of your time and place, some things are probably constant. Your adrenaline is elevated, and your actions stem from your deeply ingrained reflexes, reflexes that are rooted in a need to protect yourself and your side and to defeat the enemy. Now, try to imagine playing a very different role: the scout. The scout’s job is not to attack or defend; it’s to understand. You can also think of the soldier and scout roles as mindsets — metaphors for how all of us process information and ideas in our daily lives. However, Dreyfus was the only Jewish officer at that rank in the army, and unfortunately, at the time the French Army was highly anti-Semitic. The case went to trial, and Dreyfus was found guilty. Other pieces of information are the enemy, and we want to shoot them down. Fortunately, for Dreyfus, there was also a man named Colonel Picquart.

History vs…: a TED-Ed Lesson playlist “History has remembered the kings and warriors, because they destroyed; art has remembered the people, because they created,” wrote William Morris. To learn how 7 notorious leaders are remembered by history, watch the TED-Ed Lessons below: 1. History vs. Richard Nixon The president of the United States of America is often said to be one of the most powerful positions in the world. 2. Vladimir Lenin overthrew Russian Czar Nicholas II and founded the Soviet Union, forever changing the course of Russian politics. 3. He was one of the most fearsome warlords who ever lived, waging an unstoppable conquest across the Eurasian continent. 4. Andrew Jackson was both beloved and loathed during his presidency. 5. After the French Revolution erupted in 1789, Europe was thrown into chaos. 6. Many people in the United States and Latin America have grown up celebrating the anniversary of Christopher Columbus’s voyage. 7. Art credit: Brett Underhill/TED-Ed

An Addict’s Guide to Overcoming the Distraction Habit By Leo Babauta Yesterday wasn’t a very focused day for me — I got work done, but I also researched a bunch of newish personal interests (mostly programming and cycling), played an iPhone trivia game with my kids, read a bunch of online articles, and did very little of the writing I’d planned. Digital distractions have also pulled me from reading and meditation in the last week. I think they plague all of us to varying extents. Realizing this, today I closed all the tabs I’d been researching and reading, bookmarked a few things to read later, shut down the trivia game on my phone, closed email, and took a break. I meditated. I showered, and contemplated what was important to me. Then I got on my bike to get outside and get the blood circulating. Then I found a place with no wifi, and sat down to write. This is a guide for my fellow addicts. Recognizing when it happens One of the insidious things about the distraction habit is that we often don’t even realize it’s happening. See what’s going on

Words of Wisdom ~ Parenting & Education Compiled by Peter Shepherd “Knowledge is learning something new every day. Wisdom is letting go of something every day.” —Zen Proverb “Education is the great engine of personal development. It is through education that the daughter of a peasant can become a doctor, that a son of a mineworker can become the head of the mine, that a child of farm workers can become the president of a nation.” “He who asks is a fool for five minutes, but he who does not ask remains a fool forever.” “The mediocre teacher tells. “An investment in knowledge pays the best dividends.” “There are obviously two educations. “Education is not the filling of a pail but the lighting of a fire.” “Curiosity is the very basis of education and if you tell me that curiosity killed the cat, I say only that the cat died nobly.” “Learning is not attained by chance. “Minds are like parachutes, they only function when they are open.” “The mind is like the stomach. “Tell me and I’ll forget. “Your children are not your children.

The Lecture: A Cultural Construction of Privilege? – MICHELLE PACANSKY-BROCK It’s been quite awhile since I’ve read an article that has inspired me to write a post on a Sunday afternoon. But today, I saw a link to an article in my Nuzzel feed titled “Is the lecture unfair?” and it piqued my interest. This recent article from the New York Times discusses findings from recent studies that show how lectures privilege students who come from privileged backgrounds. The author, Annie Murphy Paul, explains, “…a growing body of evidence suggests that the lecture is not generic or neutral, but a specific cultural form that favors some people while discriminating against others, including women, minorities and low-income and first-generation college students. The idea that lectures create a biased learning environment that privileges certain students is not surprising to me — and it may not be surprising to you either.

The Cure for Your Distraction Syndrome By Leo Babauta I absolutely adore the Internet, but there’s no doubt it has made us more distracted than ever. I can see this in myself, and in watching everyone else around me: constant use of laptops, switching between browser tabs, checking things on iPhones, typing in a message here and there … we all do it. But it’s not a good formula for getting things done. We may feel productive when we’re constantly switching between things, constantly doing something, but in all honesty, we’re not. We’re just distracted. A friend recently told me she thinks she has a problem: it’s hard to get work done, or focus on anything at all, with all of the distractions. We’re all suffering from Distraction Syndrome. This causes people not to be able to study for class, to get important or difficult work done, to create, to be mindful throughout their day. So what’s the cure for Distraction Syndrome? Here’s what works for me: Become aware. This process, incidentally, is a form of meditation.