Be the Change You Wish to See in the World. Los Visionarios. Mission Statement: sustainable & spiritual focus Community Description: We are an intentional community located 10 minutes from the world famous valley of longevity, Vilcabamba, Ecuador. 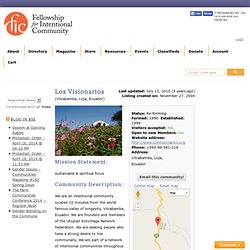 Intentional Communities - ICWiki. From ICWiki An “intentional community” is a group of people who have chosen to live together with a common purpose, working cooperatively to create a lifestyle that reflects their shared core values. 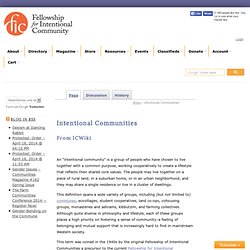 The people may live together on a piece of rural land, in a suburban home, or in an urban neighborhood, and they may share a single residence or live in a cluster of dwellings. This definition spans a wide variety of groups, including (but not limited to) communes, ecovillages, student cooperatives, land co-ops, cohousing groups, monasteries and ashrams, kibbutzim, and farming collectives. Although quite diverse in philosophy and lifestyle, each of these groups places a high priority on fostering a sense of community–a feeling of belonging and mutual support that is increasingly hard to find in mainstream Western society.

This term was coined in the 1940s by the original Fellowship of Intentional Communities a precursor to the current Fellowship for Intentional Community. The Ecovillage Movement as Response to the Environmental Crisis. By Ross Jackson, Ph.D, Gaia Trust, Denmark (Note: The following is an excerpt from the full article in the book Earthrise. 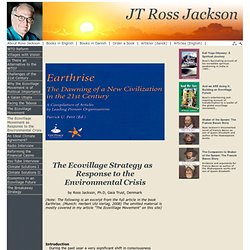 (Munich: Herbert Utz Verlag, 2008) The omitted material is mostly covered in my article "The Ecovilllage Movement" on this site) Introduction During the past year a very significant shift in consciousness occurred across the globe. For the first time ever, the environmental crisis has risen to the top of the global political agenda. The undeniable reality of global warming has forced political leaders across the world to acknowledge the truth in what environmental activists and concerned scientists have been saying for a long time, namely that environmental degradation is a major threat to our very survival and demands radical political action. The first of these is over-consumption. This means that, globally, we are eroding the carrying capacity of the ecosystem—“cutting off the branch we are sitting on”, so to speak. 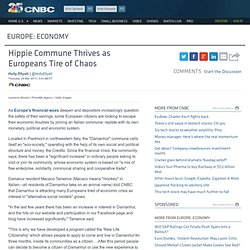 Located in Piedmont in northwestern Italy, the "Damanhur" commune calls itself an "eco-society," operating with the help of its own social and political structure and money, the Credito. Since the financial crisis, the community says, there has been a "significant increase" in ordinary people asking to visit or join its community, whose economic system is based on "a mix of free enterprise, solidarity, communal sharing and cooperative trade".

Damanur resident Macaco Tamerice (Macaco means "monkey" in Italian—all residents of Damanhur take on an animal name) told CNBC that Damanhur is attracting many Europeans tired of economic crisis as interest in "alternative social models" grows. Trust - Our vision. "We are all one Planet, all one people of EarthAll one Planet sharing our living our dying our birthand we won't stand by hearing her cry and denywe live as she lives we die as she dies.... — Molly Scott Our Dream – The Grand Ecovillage Vision We are one undivided whole on Earth and the healing of Mother Earth is a joint responsibility of all Humankind. 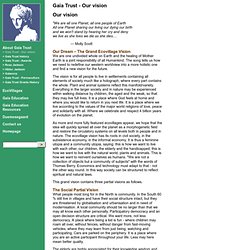 The song tells us how we need to redefine our western worldview into a more holistic one and find a new vision for the future. The vision is for all people to live in settlements containing all elements of society much like a holograph, where every part contains the whole. As more and more fully featured ecovillages appear, we hope that the idea will quickly spread all over the planet as a morphogenetic field and restore the circulatory systems on all levels both in people and in nature. This grand vision contains three partial visions as follows. The Social Partial Vision What people most long for in the North is community. - Passerelle Eco - Ecovillage Global et Permaculture.

Related:  Be the Change You Wish to See in the World   -  - Passerelle Eco - Ecovillage Global et Permaculture   -  Education   -  Enterprise