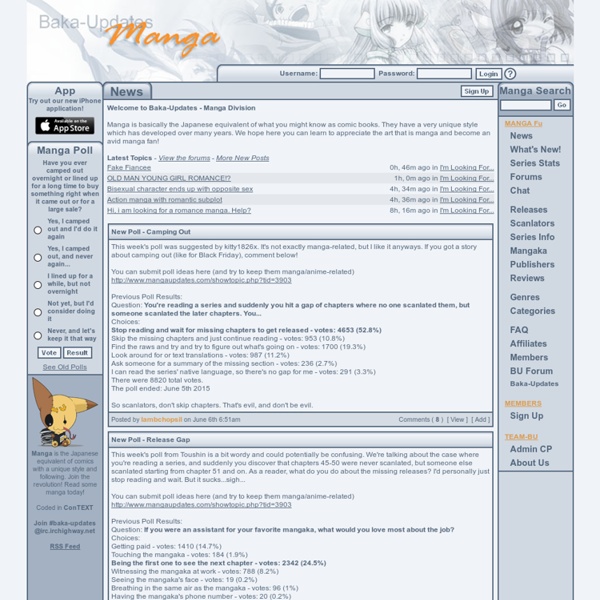 In a few days is the infamous April Fools' Day (April 1st). At MU, we WILL NOT tolerate any fake/joke releases being reported/announced to us (on any day, not just April Fools). If we, by accident, allow a fake release to get through, please report the mistake to us (either via a Change Request form, through the forum, post a comment in this news post, or you can email me at lambchopsil[at]mangaupdates[dot]com if you are not a registered member here). As you have been warned against doing it, if we discover a person still attempting to post a joke release here, that person will be dealt with. Severe action will be taken upon that scanlation group. Thank you for considering our request to remain as accurate as possible for our members.

mangaIndex W.I.T.C.H. Manga - Book 1 When WITCH was to be released in Japan, the Italian Disney team was informed that their comic probably had to be re-drawn in manga style, or else it wouldn't work for the japanese audience. The japanese artists had to travel to Italy just to learn how to draw the characters! Once released, it didn't take long until they realized that WITCH wasn't going to be big in Japan. I'm guessing it's because there are tons of mangas in Japan that start out in a similar way: girls finding out they have magic powers, evil characters trying to stop them ... it's all been seen so many times before.

Telekinetic Skateboard - Skateboarding Magazine Right after ZBoard gets attention from the media, Chaotic Moon Labs roll in with their second installment to their Board of Awesomeness project: The Board of Imagination. The Board of Awesomeness, Kinect-controlled skateboard featured at CES 2012, was the first part of this project also known as the “Why” part of the project, according to Whurley, resident evil genius at the computing company. The “Wow” part is The Board of Imagination. A mind-controlled, telekinetic, brainwave-controlled board. The board uses a Emotiv EPOC headset that turns brainwaves into motion, shooting riders down the road at speeds up to 32 MPH.

Office of Undergraduate Admissions: Transfer Students - Requirements Transfer Students Students applying to transfer must be in good standing, both academically and socially, at the institution(s) attended. The University of Michigan considers the college grade point average, the quality and quantity of transferable college credit, TOEFL/MELAB scores (if applicable), and the quality of high school credentials (including grades, strength of curriculum, and standardized test scores) during the transfer review process. First Look: Woodward Beijing Skatepark By Ben Kelly Thu, Mar 25 2010 12:03 pm | Comments Woodward skatecamp has been expanding their facilities into China’s second largest city, and just finished building the park at Woodward Beijing. With a full outdoor plaza and indoor everything else, it looks amazing.

Office of Undergraduate Admissions: Transfer Credit What is Transferable? To successfully transfer into U-M, you will have to demonstrate that your course of study is balanced on a foundation of general education courses that fulfill basic requirements and provide grounding in prerequisites or required courses that enable you to focus on a particular major. In order for your course work to be considered transferable to the University of Michigan, it must meet the following criteria: You’ve completed course work at an accredited college or university.That course work integrates into academic programs available at U-M.You’ve earned a grade of C or better while completing it. When transferring courses, you will usually receive the number of semester hours of credit (i.e., quarter hours converted to semester hours) earned on the campus(es) in which you took them. This is true, regardless of the number of credit hours similar courses may be worth at Michigan.

Circulating Fish Tank and Plant Pot by Sheng-Zhe Feng and Ling-Yuan Chou One Pot, Two Lives No drugs! Only fishes and plants. Not weed! Thought I bet it’d be extra cool if-no! This is a planter and a fishtank. How to Make Flying Paper Lanterns Your fire source needs to be both light and hot enough to enable the lantern to float. Take a 10-inch strip of cotton fabric, fold it in half, and tie it in a knot, giving you a small bow. Place it in a lid from a jar or on tin foil. 22 Unusual and Creative Aquariums Is your life full of stress and worry? Do you have high blood pressure or insomnia? Getting an aquarium may be a great way to relax! Many studies have shown that watching fish going about their daily business can reduce your stress levels, lower your blood pressure and make you feel more relaxed.

Watch Korean, Japanese, Taiwanese Drama and Movie online! "By luck, I stumbled upon your site, and of course I wanted to try it out. I went on to deposit $500 on OneTwoTrade, then opened 5 positions and won 4. Took out the $500 and still have the profit of $288 to trade with. This is a great system you got there Sir, I definitely owe you one." Shelly Green - New York

Very good! I rely heavily on this if I cant find what Im looking for on Mangafox. And I love the List feature.. I know immediately if anything Im reading is updated... by goghgirl Feb 16

very reliable database of manga and doujinshi from many languages. by lostlove2011 Feb 16