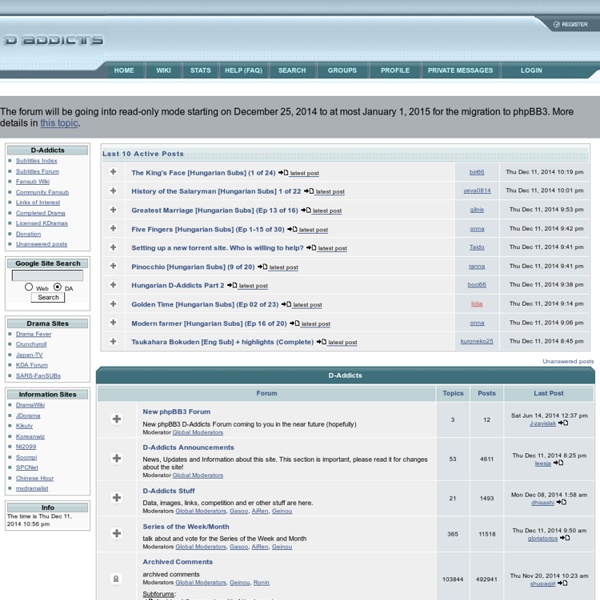 My translations are almost always perfct John’s Top 10 Japanese Dramas I really enjoy Japanese dramas. As far as Japanese entertainment media goes, dramas are right up there with anime for me. When I was first getting into Japanese stuff, I was all about the anime until one day I realized that there was a whole side of Japanese TV I was completely missing out on: J-dramas. I couldn’t believe I’d been missing out on so many great shows. Over the years, I’ve checked out a great many of J-dramas. Some were bad, some were just okay, and some were downright fantastic.

Anime-Source.Com Posted by : kevinchaosvs Posted on : 2010-07-15 Shiroki Tsubasa Ala Alba, a third and new anime adaptation of Mahou Sensei Negima, is a more faithful adaptation of its manga. It can hence be seen as an alternate continuity from the previous two series (the first being the 2005 version by Studio XEBEC and the second being the 2006 version by Studio SHAFT). Anime Theme - Windows Sidebar Gadget Gallery Windows Gadget is a new feature of Windows Vista and 7. The Vista version has a "Sidebar" which contains mini-applications (called "Gadgets") which are based on a combination of Script and HTML. They may be used to display information such as the system time, CPU/RAM usage and Internet-powered features such as RSS feeds, and to control external applications such as Windows Media Player.

Tokyo Toshokan You need to be logged in to use the chatbox. [Sticky] <Nyaa> We will of course be playing Star Citizen. If you have a game package with alpha access, you can join our piracy and smuggling efforts right here. See you in the 'verse! Romance World - Chi's Sweet Home This is cute anime, Chi is so cute ^^I want a kitten like Chi ^__^ But every eps is so short, only like 3 min, and there are like 100 eps total. Chi's Sweet Home (チーズスイートホーム, chīzu suīto hōmu?) links//futaba-chan.net What would any site be without links?! These are my favorites, varying interests in no particular order. There's also a great deal of linking buttons of varying degrees of quality that you can feel free to use ^_^; Those open in a popup window now. more buttons Kurai - writing Hearts of Ice - ranma fanfic Café Rockét - team rocket randomness The Tomb - pretty sm fanart & info Time Stranger - tons of anime sites Dokuja - writing I.C. ..back..

Version 3 In order to download files with BitTorrent, you must first download one of the clients listed below. Once you have downloaded and installed a client, click the file name, and open the .torrent file using the client. Then chose where you want to save and start the download (your client may start doing this automatically). Speeds can vary depending on torrent creation date, number of seeders / clients on it, and so on. Please contribute to the fansub community by leaving your download window open for as long as possible (at least a day or 2) allowing others to download the file.