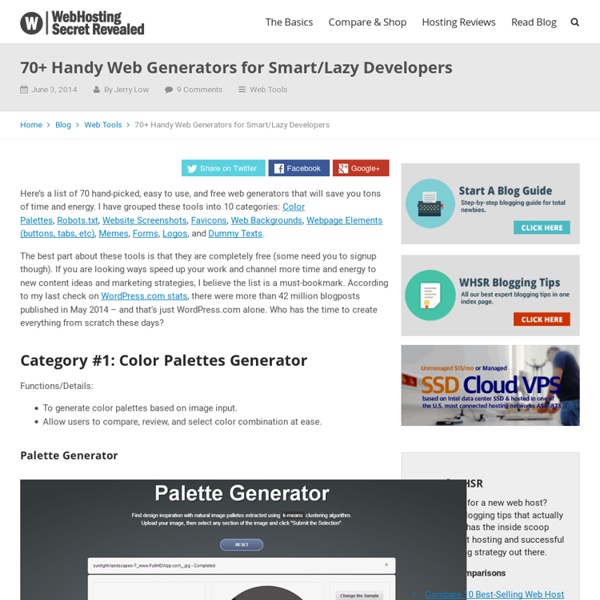 Here’s a list of 70 hand-picked, easy to use, and free web generators that will save you tons of time and energy. I have grouped these tools into 10 categories: Color Palettes, Robots.txt, Website Screenshots, Favicons, Web Backgrounds, Webpage Elements (buttons, tabs, etc), Memes, Forms, Logos, and Dummy Texts. The best part about these tools is that they are completely free (some need you to signup though). If you are looking ways speed up your work and channel more time and energy to new content ideas and marketing strategies, I believe the list is a must-bookmark. According to my last check on WordPress.com stats, there were more than 42 million blogposts published in May 2014 – and that’s just WordPress.com alone. Who has the time to create everything from scratch these days? Category #1: Color Palettes Generator Functions/Details: To generate color palettes based on image input.Allow users to compare, review, and select color combination at ease. Palette Generator Pictaculous Kuler

40 Online Generators for Web Designers Should Bookmark Online Generators for Web Designers can be a great way to save time in your web design projects. High-quality generators can create graphics or code or even layouts in a matter of seconds or minutes, things that might take an hour or more if done by hand. Online generator are those tools that help us to create those popular “XHTML valid” CSS banners, micro buttons or css website templates in seconds. In such cases online generators can be of great help which do the necessary job and some tools don’t have to be downloaded also.

City Systems It would be far easier and would require less energy to build new, efficient cities than to attempt to update and solve the problems of the old ones. The Venus Project proposes a Research City that would use the most sophisticated available resources and construction techniques. Its geometrically elegant and efficient circular arrangement will be surrounded by, and incorporated into the city design, parks and lovely gardens. This city will be designed to operate with the minimum expenditure of energy using the cleanest technology available, which will be in harmony with nature to obtain the highest possible standard of living for everyone. This system facilitates efficient transportation for city residents, eliminating the need for automobiles. The Venus Project's Circular City arrangement is comprised of the following:

6 Methods to Add Speech Bubbles to Pictures “I have some photos (JPEG files) and wish to add “speech bubbles”. Do you know of a program or any online app that will do this? Many thanks!” Remember the cute and expressive bubbles appear in comics of our childhood? Want to add speech bubbles/speech balloons/talk bubbles/thought bubbles to the favorite pictures or photos of your own? 27 Things to Know Before You Work in Social Media January 24, 2011 Liz published this at 7:57 am Every day, I’m immersed in social business. I spend as much time on my computer as some people spend in their shoes. I rarely talk about “social media” except with clients, because to me that’s like talking about “pencils.” I’d rather be using one than talking about what they do.

10 Puzzle Websites to Sharpen Your Programming Skills - StumbleUpon By Ben Dowling Solving programming puzzles is a fun way to develop your logical and problem solving abilities. Also, when you’re familiarizing yourself with a new programming language, solving puzzles for that language can help speed up the learning process. Here are the top 10 popular programming puzzle sites that will help test your thinking and improve your programming, problem solving, and logical thinking skills. 1. Insync: A Google Docs-Loving Dropbox Rival If you’re the kind of person who uses Google Docs and Dropbox a lot, perhaps for business, as is becoming increasingly popular, then you will be interested to hear that Asian firm Insync has just announced that its cloud-based sharing platform is available for free. How it works The service provides cloud-based storage for files but it specialises in Google Docs, allows users to easily sync, update and share documents between others. Its user interface is a neat alternative to Google’s own interface which turns your virtual docs into ‘physical’ files that are housed on your PC or Mac, making them infinitely more accessible and easier to view than through the standard Web interface.

Einstein's spooky action acts at 10,000 times the speed of light A bonus scene from REALITY LOST, a different documentary about quantum mechanics by Karol Jalochowski, the movie produced by Centre for Quantum Technologies (CQT) at National University of Singapore. Christian Kurtsiefer, a Principal Investigator at CQT, explains how and why he hacks quantum cryptographic systems. Dag Kaszlikowski is the host. We filmed this conversation at the Thow Kwang Pottery Jungle. SYNOPSIS When 20th century begun, a major shift took place in science. 5 Best Twitter Account Backup Tools, Apps, Solutions As the old saying goes, it’s always better late than never. Time to roll up your sleeves, friends! Get ready to backup your valuable Twitter account data before it’s gone forever.