Selected Objects from the Exhibition 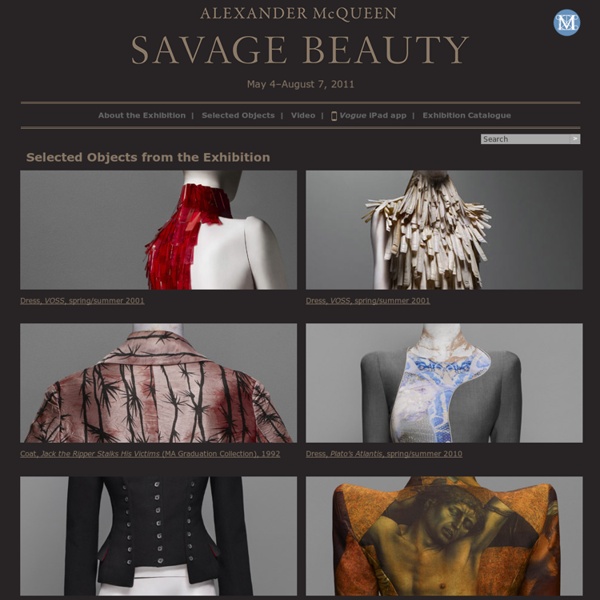 Urban Renewal by Mari Santos We're usually kinda "meh" about most T-shirt surgeries because we're just can't get into the hack'em, slash'em sartorial school of thought. Toronto-based Mari Santos, on the other hand, is such a genius with a pair of scissors we want to hitchhike across the border, kidnap her, head back south, and then set her to work against her will on the oversize T-shirts we seem to get for free by the pound. Except that it would probably be illegal. Which is kind of a bummer. Her ethos: "Taking something old, frumpy and ill fitting and making it into something new." Santos will be joining some 20 other designers to work on Urban Outfitter's Urban Renewal line.

Savage Beauty So we finally went to the McQueen exhibition at the Met. We woke up early, and like everybody, we waited in line for an hour or two. It was so crowded inside. Haute Design by Sarah Klassen: Graceful Gowns by Papilio I came across these delicate and sweet gowns the other day, and thought you might enjoy them as well! Photographed prettily by Marino Danilova, these dresses offer such a dreamy look...I haven't shared too many wedding gowns in the past, but I find I greatly enjoy those that are so special and unique, don't you? I couldn't begin to choose a favorite, though, I'm really liking the lightly gold toned dress as well as the detailed neckline and waistline of the gown featured on the left in the last image. Do you have a favorite? {Just in Case} A few features this week, to click...

Iris van Herpen curates a magazine Dutch fashion designer Iris van Herpen has become the latest guest editor of Belgian fashion publication A Magazine Curated By. Van Herpen took the reigns of the creative content for the thirteenth issue of A Magazine Curated By, choosing a cover, imagery and articles that reflect her interests and aesthetic. "Inspiration is a matter of sensitivity," said Van Herpen. "It is the ability to collect from the past, present and future as they shift past us simultaneously."

The Art of Negative Space. on the Behance Network Sign Up Log In The Art of Negative Space. Project Featured On: Alexander McQueen: Savage Beauty is coming to London The groundbreaking Alexander McQueen retrospective Savage Beauty is finally heading across the pond to London, four years after it debuted at the Metropolitan Museum of Art. The exhibition will open at the V&A in March 2015, and it'll probably be as hugely successful as it was in New York. Savage Beauty was a record-breaking show for the Met, attracting over 660,000 visitors in 2011 and making it the eighth-most visited exhibit in its 142-year history.

Fashion Alices (Photography; Haute Couture) The following is a selection of a series of fashion photography based on Alice, published in 2003 December. The female model is Natalia Vodianova (b1982). The photographer is Annie Leibovitz (b1949). This was published by Vogue magazine. More images: Vogue Cover Page, Alice Falling, Alice and the Cheshire Cat Alexander McQueen: Savage Beauty - About the Exhibition 14 March - 2 August 2015 'London’s where I was brought up. It’s where my heart is and where I get my inspiration.'- Alexander McQueen, January 2000 Iris Van Herpen Couture Fall 2013 Posted by models.com | July 11th, 2013 Iris Van Herpen Couture Fall 2013 As one of fashion’s most forward thinking designers, Iris van Herpen is always there to push the envelope. Whilst others are churning out ball gowns or cocktail dresses to send down the catwalk, van Herpen uses her runway as a platform for innovation.

Alexander McQueen: Savage Beauty review – superficially magnificent The V&A’s retrospective of the career of Alexander McQueen, Savage Beauty, began its life at the Metropolitan Museum of Art in New York, where it was a huge hit. Expanded and edited to talk a little more to the city where the designer (1969-2010) was born and learned his craft, it will doubtless be an even bigger smash in London. At the early-morning preview I attended, various fashion editors and PR types could be seen wandering its rooms almost listlessly, as if under a spell.