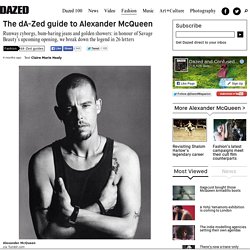 Opening at the V&A five years after the fashion iconoclast’s death, the Alexander McQueen retrospective promises a groundbreakingly inclusive tribute to the designer and his vision. Whittling down the world of fashion’s most controversial, far-reaching and future-facing designer into a 26-point love letter feels, inevitably, too small; even in his quietest moments, McQueen’s romantic offensive against fashion’s prevailing mood for minimalism was unfailing. So here, to mark the exhibition’s opening, is just one narrative among so many: our critical guide to the clothes, the shows, the collaborators, and, connecting everything, the fantastical playground of inspirations that one can just about make out in the dark. 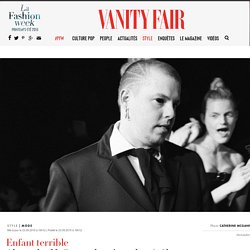 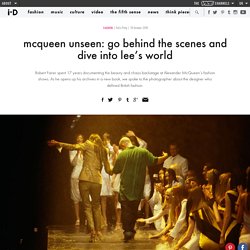 Though Lee's production budget was minimal compared to the spectacular productions that would define his career (he'd only just graduated from CSM), his wild talent and sheer inventiveness were there for all to see. The tightly wrapped cling film dresses splattered with paint and mud, sharply tailored evening coats, unbuttoned men's shirting and first glimpse of the infamous bumster trousers, provoked and intrigued. From exaggerated silhouettes to provocative model behaviour, and a fine balance between romance and aggression, the McQueen signatures were all on show. All the elements were there, and Robert was there to document it. What Robert's lens captured over the next 17 years would reveal McQueen's world in all its intricate glory, dazzling splendour and creative chaos. How did you get into photography and fashion? The McQueen show that changed the future of fashion. If fashion today is defined by one thing, it’s speed. 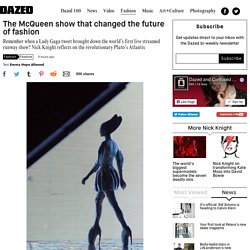 From click-to-buy catwalks to creative directors citing the relentless pace as the reason behind their departures, the industry is spinning with ever-dizzying intensity. McQueen and Tartan. Alexander McQueen (British, 1969–2010). 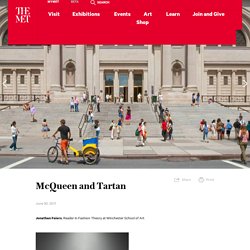 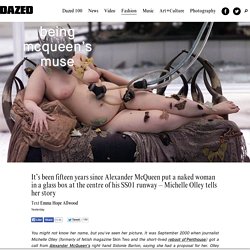 It was September 2000 when journalist Michelle Olley (formerly of fetish magazine Skin Two and the short-lived reboot of Penthouse) got a call from Alexander McQueen’s right hand Sidonie Barton, saying she had a proposal for her. Olley had been put forward by casting agent she knew through the London club scene to be the centrepiece in McQueen’s monumental asylum-themed SS01 show VOSS, where models prowled around a padded room, their heads bandaged. For the show’s finale, the glass walls of a box in the centre of the runway fell down and shattered, revealing a naked Olley reclining on a chaise longue in an image that referenced a picture by American photographer Joel-Peter Witkin. As the audience broke into rapturous applause, Olley's fate as the focal point of one of the most powerful and provocative fashion shows in history was sealed. On the show's fifteenth anniversary, she reflects on her experience.

If you like McQueen’s asylum, you’ll like Joel-Peter Witkin. Like for Like is a new series that explores cultural connections, giving recommendations to help promote the discovery of groundbreaking underground fashion, film, music, arts and culture. 15 years ago this September, Alexander McQueen took over an old London bus garage for one of the most visionary shows of his career. 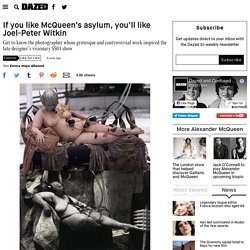 Guests arrived to the sound of a beating heart pulsing through the darkness, and were forced to wait looking, not at a runway, but at a large mirrored box, face-to-face with their own reflections (a gesture that returned the gaze of the fashion critic back on itself). Finally the box lit up – through the glass was a clinical asylum space, its walls padded, with another smaller box in its centre. Disturbed looking models emerged from the darkness, pressing their hands against the windows as they prowled in incredible creations brought to life with feathers, antique fabrics and shells, their heads wrapped in bandages. Alexander McQueen new book Eyrolles 1. When Alexander McQueen Turned Trash Into Treasure. “The irony of conspicuous consumption is well past its sell-by date,” wrote Susannah Frankel in AnOther Magazine S/S09. 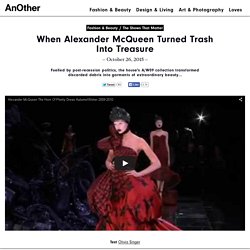 Alexander McQueen’s most dark and twisted moments. “I find beauty in the grotesque,” Alexander McQueen once said – and, as evidenced by the late designer’s large and heralded body of work, he certainly did. 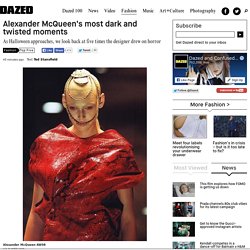 For though McQueen’s collections were a triumph in technique and theatricality, they often left members of the audience with a sense of unease, in a combined state of wonder and repulsion. He rendered models’ eyes blood red, attached skeletons to their ankles and placed one in a glass case filled with moths. Alexander McQueen’s greatest catwalk moments. Lee Alexander McQueen is known as much for his shows as he is for clothes, and it’s impossible to look back in fashion and not automatically think of his legacy. 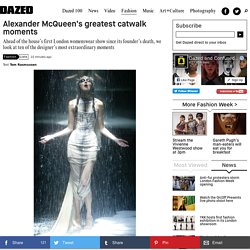 The designer set himself apart with his collision of influences that ranged from low-art to the avant-garde, as well as the characteristic juxtaposition of light and dark that permeated his work and put him on the map. Politically and aesthetically, McQueen’s work embodies the spirit of London – wherever he showed during his nearly 20-year long career, the punk sensibility of the capital went with him. This season, for the first time since 2002, Sarah Burton is bringing the house back to its British roots, showing AW16 today at London Fashion Week. Since taking the helm in the wake of her friend and mentor’s passing, Burton has kept his legacy alive by continuing to present collections imbued with romanticism and exquisite artistry.

Selected Objects from the Exhibition. Savage Beauty. So we finally went to the McQueen exhibition at the Met. We woke up early, and like everybody, we waited in line for an hour or two. It was so crowded inside. And it was so totally worth it. The curation was perfect, from the layout to the sound design – it allows you to take a mind-blowing journey into the designer’s imagination.

Emotion catches you and stays with you for days. I was so moved that I asked for authorization to go back and take pictures. When Nancy Chilton, from the Met, told me I would be able to go back to take some pictures, I literally jumped for joy. These images are just a tiny part of the exhibition. The exhibition will close on Sunday. I’ll leave you with the images. Alexander McQueen: Savage Beauty. “Life to me is a bit of a Brothers Grimm fairytale” once remarked Lee Alexander McQueen. Sadly for him, it turned out to be a particularly dark and tragic one that ended on Feb 11, 2010 with his suicide in his Mayfair flat. A year on from the tragedy, McQueen has received the ultimate posthumous accolade – a retrospective at the Costume Institute in New York – becoming only the second designer (after Gianni Versace in 1997) to be honoured so soon after his death. 'Alexander McQueen: Savage Beauty', which opens on May 4, traces the evolution of the designer from his Jack the Ripper-inspired 1992 MA collection right through to the wondrously tender collection based on the art of Hieronymous Bosch that was to be his finale.

Dazed Digital: What was your reaction to the first McQueen show you saw? Andrew Bolton: The first show I saw was “Number 13” with Shalom Harlow where she is rotating on a dais and being sprayed by robots. Savage Beauty. La rétrospective McQueen attire des foules records. L'exposition, qui a fermé ses portes dimanche soir, a attiré 662 000 visiteurs en trois mois seulement.

Un succès qui place les créations de McQueen au 8e rang des expositions les plus fréquentées au cours des 141 ans d'histoire du Musée d'art métropolitain, avec les archi courues Mona Lisa, en 1963, et Picasso, en 2010. Alexander McQueen: Savage Beauty - Gallery Views. Alexander McQueen: Savage Beauty is coming to London. The groundbreaking Alexander McQueen retrospective Savage Beauty is finally heading across the pond to London, four years after it debuted at the Metropolitan Museum of Art. The exhibition will open at the V&A in March 2015, and it'll probably be as hugely successful as it was in New York. Savage Beauty was a record-breaking show for the Met, attracting over 660,000 visitors in 2011 and making it the eighth-most visited exhibit in its 142-year history. Tickets are on sale now, but be warned: the V&A is already experiencing incredible ticket demand, though they promise that the show hasn't sold out.

Yet. Exploring Savage Beauty out of hours. Alexander McQueen set to become UK's most popular exhibition of all time. Alexander McQueen: Savage Beauty review – superficially magnificent. The V&A’s retrospective of the career of Alexander McQueen, Savage Beauty, began its life at the Metropolitan Museum of Art in New York, where it was a huge hit. Expanded and edited to talk a little more to the city where the designer (1969-2010) was born and learned his craft, it will doubtless be an even bigger smash in London. At the early-morning preview I attended, various fashion editors and PR types could be seen wandering its rooms almost listlessly, as if under a spell.

So great was their fascination, there were points when – just imagine it – they momentarily forgot even to lift up their tightly clasped mobiles to record this embarrassment of riches for the benefit of their followers on Instagram. A part of me understood the rapture. Savage Beauty isn’t like any other fashion exhibition I’ve ever seen. It wasn’t, however, only such disquiet that prevented me from joining the swooners. Arranging the rooms thematically deprives the show of a narrative. Photos: Alexander McQueen’s Fashion in 'Savage Beauty' at Victoria and Albert Museum.

Watch: Alexander McQueen retrospective opens at V&A. Curator Claire Wilcox described McQueen as "one of the most influential designers of his generation who shocked with his spectacular and powerful catwalk shows". The exhibition, she said, was a reflection of his "elaborate storytelling, craftmanship of the highest level" and his Romantic obsession with nature. On display are technical skills honed as an apprentice on London's exclusive Savile Row and characterised by precisely tailored curves and exaggerated silhouettes that became his trademark.