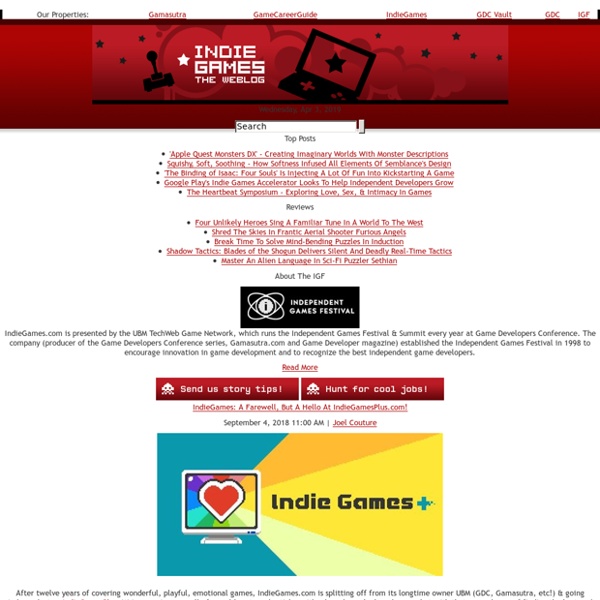 A landmark moment for video game broadcasting company Twitch today: You can now buy Vlambeer's latest game Nuclear Throne directly through Twitch, the first game to be available for purchase through the service. If you connect your Twitch account up to the Nuclear Throne website, you can then choose to purchase the game via Twitch. Buying the game through Twitch grants you the ability to chat during subscriber-only mode, says Twitch. "If you're interested in learning about game development, this is where you should buy the game," reads the blurb. According to the website, 60 percent of the revenue goes to Vlambeer via the purchase -- this compares to 70 percent through Steam, and 90 percent via Humble Bundle.

Gaming - Blogcritics A couple developers, most notably EA (Electronic Arts), have come out recently with announcements that they’re going to quit being so reliant on licenses and pursue creating new IPs (intellectual properties) aimed at blockbuster status. At first I was excited. Holy shit! Developers get it finally! A new renaissance of gaming will be upon us in a few years. IndieGames [By Armin Ibrisagic] Our relationship with DLC at Coffee Stain has been quite rocky. For Sanctum 1, we initially decided to do tons of small DLCs where you could buy a tiny additional piece of content for $1, and we'd let players choose themselves what content they wanted to buy. That didn't turn out great, after only a few months, we had a clustermess of 10 different DLCs, each priced at $1 each, new players had no idea what to buy, and just adding every single one to your Steam cart was a nightmare. For Sanctum 2, we decided to do a Season Pass with big expansions that added tons of more content.

The Weblog - Feature: Top Freeware Platformers 2009 [From now until mid-January, IndieGames.com: The Weblog will be counting down the best independent and freeware games of 2009, with descriptions, screenshots, and links of the best games in each major category. Previously: Top 10 Shoot 'em Ups, Top 10 Puzzle Games, Top 10 Browser Platformers] The fourth of our in-depth 2009 Best Of Features here on the IndieGames.com blog (after the overall Top 10 we did for Gamasutra and the 10 Indie Games for '10 article), we're proud to present twenty of the best freeware platformers released in 2009. 2D platformers make up a large portion of freeware indie games, and if you're looking for the next Cave Story, Knytt or Spelunky, then there's no better place to start than here - our selection of the freshest platform games released in 2009 for your enjoyment.

Making and selling visual novels and dating sims - indiePub Games Although both visual novels (VNs) and dating sims have been gaining popularity in western markets, many people still don't know exactly what they are or, more likely, have the wrong idea about them. Visual novels are a graphic novel of sorts with flat or basically animated tableaus and a story with optional paths the reader can follow. Dating sims are very similar in that the reader chooses from on-screen options but the purpose is to develop personal relationships with in-game characters. These games can have rather complex paths with multiple endings.

Computer Games I don’t have any decent recent photo so I’ll just go with this one, a few years ago Today I’m 40, and it has been more or less 10 years since I’m doing indie games! The Past All began back in 2003, when I discovered the now defunct Dexterity forums. Top 10 pixel-art iPhone games Pixel-art, sprite work, and hand-placed coloured dots used to be the best that a game could achieve. But as console power increased and artists became more experienced, these pixelated graphics quickly grew from humble necessity to something of an art form. Those raw, pixelated edges and simplified, bright colour palettes gave way to some of the most beautiful games, emotive characters and immersive worlds. But much in the same way that retro chiptune beats were replaced by orchestral scores and horrfiying EA trax, 3D graphics have wiped out hand-drawn sprites with equally impressive efficiency. But while the home consoles faff about with high-definition this and texture-buffer that, and even consoles like the DS focus on 3D with low resolution textures stretched across bulky, boxy, ugly polygons, there's still one refuge for this almost ancient art form. Beat it!

Magicka Gameplay[edit] Magicka is an action-adventure game played in a 3D environment from an isometric perspective. A single player or up to four simultaneous cooperative players take on the roles of wizards tasked with stopping an evil sorcerer that has thrown the world into a state of turmoil. The main adventure campaign consists of 13 levels.[7] Spells and elements[edit]