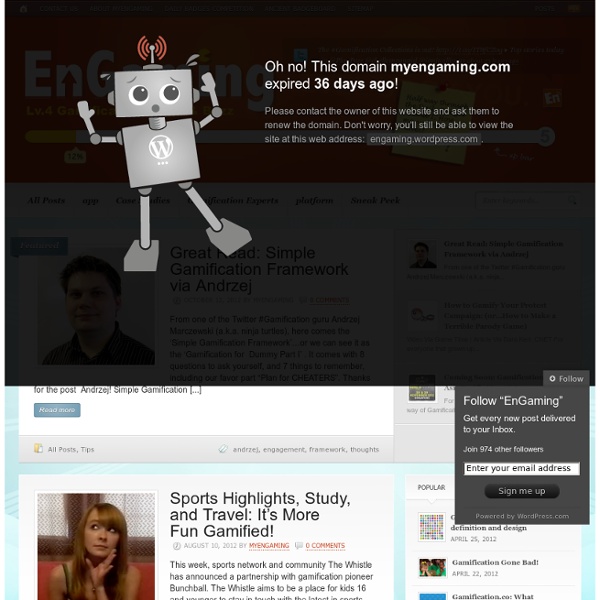 Insurers Are Plugging Into ‘Gamification,’ But Are Only Beginning to See Its Potential Published in Health Plan Week, April 23 issue, copyright © 2012 by Atlantic Information Services, Inc. Reprinted with permission from Atlantic Information Services, Inc. If UnitedHealth Group had its way, all of its members would own a Microsoft Xbox video game system and would use it every day. While promoting video games might sound like a way to grow couch potatoes, UnitedHealth and several other major insurers are using concepts behind popular video games to promote wellness, encourage exercise and boost social interactions between people -- and ultimately improve health outcomes and lower costs. But health insurers have yet to harness the full potential of gaming for their members, says Kris Duggan, CEO of Menlo Park, Calif.-based Badgeville, which consults with companies and helps develop products for "gamification" efforts. "If you look at the health care industry in general, it's not the most terribly exciting of times. Humana is also using Xbox Kinect. Aetna Sees BMI Decline

Zombie Apocalypse, the Board Game | Wired Design BRAINS! Zombies want them and Jeff Gracia has them. By day, Gracia is a software test automation engineer for Bose. By night, he uses his (tasty) gray matter to deal with the unruly undead, along with the more pedestrian horrors of designing a board game, like production deadlines and shipping costs. On Apr. 22, Gracia raised $210,237 on Kickstarter to bring Zpocalypse to market. How did a humble engineer with no game-development or design expertise end up with a six-figure haul? Game Night of the Living Dead The project started as a creative outlet. His first prototypes were crude black-and-white printouts and gameplay was a disaster, “Everyone died in a few minutes” admitted Gracia. Unfazed, he redesigned the rules. Gracia and Parks had a rule set and general design, but games live or die on artwork. The pair held a “design-off”, with the only prize being more unpaid work, goth glory, and a share of future revenues. Custom design software allowed the team to rapidly develop content.

4 Ways Your Business Can Avoid Being a Menace on Twitter Curt Finch is the founder and CEO of Journyx, a company that offers time-tracking and resource management software. Connect with him and Journyx on Facebook and Twitter. Highbeam Research just updated its quarterly social media index, and according to the latest data, Twitter received 55.17% of total media attention in the first quarter of 2012, widening the gap between second-placed Facebook, which fell to 41.18%. Naturally, every business wants a piece of the action on Twitter, but on a platform with that many eyeballs, every business better have a strategy first. While a company may feel it is being innovative by reaching out to a new audience on Twitter, that same audience often feels that the business’s tweets are spammy, phony and even creepy. To do that, here are four faux pas that companies should avoid, and some basic tips for crafting an approach that appeals to fans. 1. Rather, publish engaging snippets that will spark a conversation. 2. 3. 4.

Museum as Game Board – Natron Baxter Applied Gaming This post is cross-posted on Mathias Crawford’s personal blog. A couple weeks back I was invited to participate in a fantastic discussion at SFMOMA entitled Museums as Game Board. Held in conjunction with the museum’s inspiring ArtGameLab, I was joined on the panel by GlichLab’s Sarah Brin, Ian Kizu-Blair and Sam Levigne from Situate, Tom Russotti, an experimental art/game designer who was Skyped in from somewhere in Eastern Europe, and SFMOMA’s superlative Erica Gangsei, who also served as the moderator of the panel. Before an hour-long discussion (which will hopefully be available as a podcast at some point in the near future), panelists were invited to talk briefly about their work, and what they see as the intersections between games and museums. Ever since my cover piece for Kill Screen last summer, I’ve been doing a lot of thinking about play in the context of a museum space, and so I was thrilled to get the chance to articulate some of my ideas. (Image via) (Image via)

Fringe Gamer Daniel Solis MindShift | How we will learn MindShift explores the future of learning in all its dimensions. We examine how learning is being impacted by technology, discoveries about how the brain works, poverty and inequities, social and emotional practices, assessments, digital games, design thinking and music, among many other topics. We look at how learning is evolving in the classroom and beyond.We also revisit old ideas that have come full circle in the era of the over scheduled child, such as unschooling, tinkering, playing in the woods, mindfulness, inquiry-based learning and student motivation. We report on shifts in how educators practice their craft as they apply innovative ideas to help students learn, while meeting the rigorous demands of their standards and curriculum. MindShift has a unique audience of educators, tinkerers, policy makers and life-long learners who engage in meaningful dialogue with one another on our sites. Contact the us by email.

Amidos Entertainment Features - The Designer's Notebook: Triple-A Games for Women? Seriously? There's a longstanding piece of conventional wisdom in the game business that women won't shell out big bucks for games. They might play small games or free games, but for most women, buying a triple-A console blockbuster for themselves is out of the question. I haven't done any research on the issue, but I'm pretty up to speed on our shibboleths, and I know that's what a lot of developers think. (Of course, women in the game industry spend money on games, but they're atypical.) Imagine my bogglement, then, when Brandii Grace informed me at the 2012 Game Developers' Conference that she is founding a company to make triple-A games for women. I suppose I shouldn't have been so surprised; this is, after all, Brandii Grace we're talking about. She's still a big deal in the IGDA, too, having won their MVP award this year for setting up their events volunteers program. Still, you can't persuade women to buy triple-A games with composure alone. BG: I disagree! Prom Week

Hunicke sees new online frontier at Tiny Speck Robin Hunicke's recently-announced move from Thatgamecompany to Tiny Speck comes at an interesting time for the Glitch developer, which just pushed its game back into Beta after just two months on the market. As founder Stewart Butterfield explains, the slower, steadier model of web service design to which the Flickr co-founder had been previously accustomed didn't translate well to the world of online games. "We thought we'd be able to iterate our way to the promised land, and that wasn't the case," he tells us. Glitch, a web-based online play space with all the whimsy one can expect from the involvement of Katamari Damacy creator Keita Takahashi, was whisked back into the oven in November, with a lot of candid humility from the developer, which promised unhappy players that had already paid money would get that money back (only 3 percent of players took Tiny Speck up on the offer, Butterfield tells us). How did Journey executive producer Hunicke get involved with the studio?