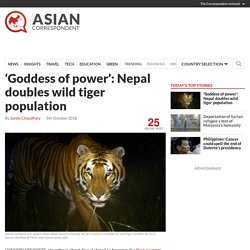 On National Conservation Day, September 23, 2018, Nepal announced that it has 235 tigers living in the wild. A significant increase from just 121 tigers in 2009. Fakhel - Profile data - NepalMap. What ancient DNA tells us about the Himalayas. In a collaborative study by the University of California, Merced, the University of Oklahoma, the University of Chicago and Uppsala University in Sweden, researchers conduct the first ancient DNA investigation of the Himalayan arc, generating genomic data for eight individuals ranging in time from the earliest known human settlements to the establishment of the Tibetan Empire. 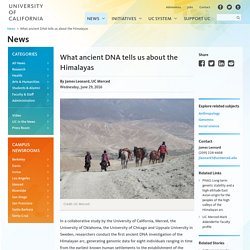 The findings, published on June 20 in the Proceedings of the National Academy of Sciences, demonstrate that the genetic makeup of high-altitude Himalayan populations has remained remarkably stable despite cultural transitions and exposure to outside populations through trade. The study was conceived by UC Merced Professor Mark Aldenderfer, who also directed the surveys and excavations of the sites from which the analyzed materials were recovered. Aldenderfer was joined on the project by Oklahoma Professor Christina Warinner and Chicago Professor Anna Di Rienzo.

Nepali farmers fight to save indigenous seeds - SciDev.Net South Asia. When the indigenous ‘Jumli Marsi’ variety of rice, grown in Nepal’s Jumla district, was hit by blast infection, farmers had little choice but to substitute it with the Chandannath 1 and 3 'improved' varieties developed through hybridisation and originating in China. 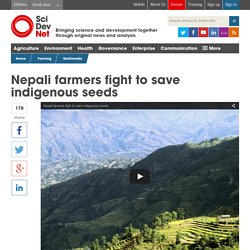 The Chandannath varieties stood up well against Magnaporthe grisea, the blast fungus, and the farmers were happy. But, it was not long before farmers and consumers realised that Jumli Marsi made for a more satisfying meal. “We took a perception survey and found that people prefer to eat Marsi. There is some truth to it – perhaps the nutrition value is high in Marsi,” says Bal Krishna Joshi, senior scientist and plant breeder at the National Agriculture Genetic Resources Centre (Genebank) in Kathmandu.

“Marsi soaks up milk and ghee and becomes sweet,” he adds. But, there are difficulties. With policy gaps that hinder innovation and marginalise indigenous seeds, Nepal’s experts are calling for a new approach. Barbara Adams, free spirit and American expatriate in Nepal, dies at 84. “I was sitting at the Yak and Yeti bar of the Royal Hotel, and the prince mistook me for someone else.” 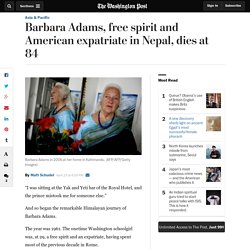 And so began the remarkable Himalayan journey of Barbara Adams. Walking the holy river. One man's journey to trace the 160 or so traditional bathing places along the now-polluted river When American researcher William Forbes recently surveyed some of the temples and ghats along the Bagmati River to see if they survived the earthquake, he was greeted with much enthusiasm at a small tirtha just north of Pashupatinath called Hatyamochan. 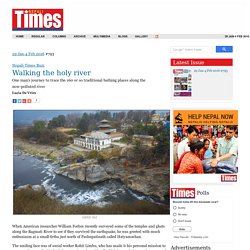 The smiling face was of social worker Rohit Limbu, who has made it his personal mission to preserve the temple. Limbu led restoration of an old well which is now being used as a sacred bathing spot for women during Rishi Panchami. “I dreamt about you the other night,” Limbu told Forbes. Last but not least by Nepali Times - Exposure. When this generation passes on, the way of life of one of the last nomadic hunter gatherers of the Himalayan foothills will disappear forever. 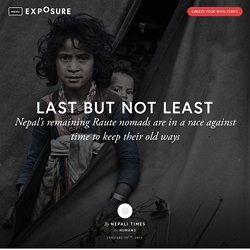 And with them will go a distinct language, culture and a system of beliefs. Nepal elected to AIIB board of directors. FinMin hails launch of the new international development bank as a timely and wise decision Representatives of the founding nations of the Asian Infrastructure Investment Bank (AIIB) walk around a sculpture after it was unveiled during the opening ceremony of the AIIB in Beijing, China, January 16, 2016. 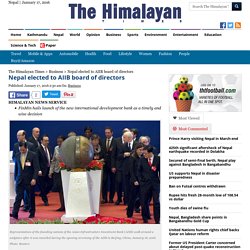 Photo: Reuters Nepal “Tourism development for economic progress” Minister for Culture, Tourism and Civil Aviation A... Art & Culture Wordsworth This accessible, all-compassing guide will help yo... Women Another Meters/bonwe store opens The first showroom of the brand is at City Center ... Exorcising the Indian ghost. The lesson from this blockade is that we must develop alternatives in sourcing and managing our energy supplies In the Hollywood film Ghostbusters, a group of men start a company to catch ghosts. 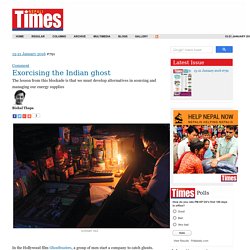 Watching the movie as an impressionable teenager, I was taken by the movie’s central message: the trick to catching ghosts is not to feel haunted in the first place. As our daily forage for cooking gas and petrol becomes increasingly longer, it is clear that we are haunted by the ghosts of India. The spectre of the Indian ghost now clouds all our conversations. The search for energy independence has once again fired the public imagination. Ex-minor ex-Maoists. In a shanty town behind Kathmandu Airport, by the stinking Manohara River, Sukmaya Tamang keeps a careful eye on her four-year-old son playing outside as she works on her sewing machine. 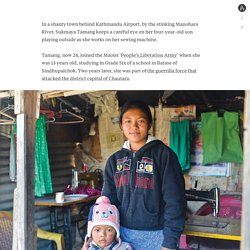 Tamang, now 24, joined the Maoist ‘People’s Liberation Army’ when she was 13 years old, studying in Grade Six of a school in Batase of Sindhupalchok. Two years later, she was part of the guerrilla force that attacked the district capital of Chautara. “I was too small to lift a heavy machine gun, but I was still trained to fire it,” she told us, taking a break from her sewing. “I have no more dreams, the party I was ready to die for has forgotten me. The man I loved tortured me. After leaving her abusive husband three years ago, Tamang has been working and living amidst the teeming squalour of this settlement of the landless and dispossessed as big jets roar overhead.

Tamang was talked into joining the Maoist militia by senior girls of her village who were ‘whole-timers’ in the party. A boy named Lenin. Nepal’s last car carrier dies. File Photo: Suraj Kumar Bhujel Dhan Bahadur Gole, the last known survivor of Nepali porters who carried cars for a living in the 1930s, has passed away. 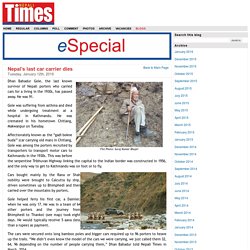 He was 91. Gole was suffering from asthma and died while undergoing treatment at a hospital in Kathmandu. Humla infants deprived of vaccines for months. A new mother in Maila village of Humla district. Photo: Prakash Singh Art & Culture Wordsworth Everything You Always Wanted to Know About ‘IT... Opinion Federalising the Nepal Police: A way out Change management must be made an endogenous proce... Women Under one roof Shopping can be fun and successful only when you g... Entertainment Real O’Neals’ producer gets gay actor he wished for A producer for ABC's new sitcom "The Real O'Neals"... HUMLA: As many as 120 infants and 30 expectant months in Maila village of Humla district were deprived of vaccination for last five months apparently due to negligence of concerned authorities. Staying alive. The least that Nepal’s rulers must do is to ensure our workers abroad don’t have to die saving the country from economic collapse.

One reason Nepal has not gone completely belly-up despite the earthquake last year and this ongoing blockade is that the money wired home by Nepali migrant workers is keeping the economy afloat. Makawanpur village illuminated with wind-solar energy - The Himalayan Times. A wind-solar energy project being run in Phaparbari village of Makawanpur district. Photo: RSS MAKAWANPUR: Chatur Bahadur Ghalani of Bhorleni, Phaparbari VDC-3 in Makawanpur district had never believed that electricity could be generated from other sources besides water and sun. When his house and the entire village were illuminated by the electricity generated from wind which often blows severely from dawn to dusk across the village, Ghalani now does not believe his eyes.

The Wind-Solar Hybrid Energy Project, installed by the Alternative Energy Promotion Centre (AEPC) in Bhorleni in the district, produces 25 kilowatt of energy -10 kilowatt from wind and 15 kilowatts solar, adequate enough to illuminate the village. As many as 131 households in Bhorleni are not only happy but also consider themselves lucky to access electricity round the clock at time when the country is reeling under the power outage up to 14 hours a day.

Recommended Stories: Year in Review. Health Care in the Himalayas. To get to Saldang is simple, if not exactly easy. You walk. Every breath we take. Watch How One Man Took the Internet to 60,000 People in Rural Nepal. Breaking barriers. A Nepali mountaineer-turned-relief worker is in the race to win NatGeo’s Adventurer of the Year Pasang Lhamu Sherpa shares her name with Nepal’s most iconic female mountaineer.

Photos. Nepal earthquake 2015. Nepal politics. Nepal's Third Gender Passport Blazes Trails. Democracy and the demographic shift. The movement of Nepal’s population within the country is having a profound impact on its politics When a draft copy of the 2011 census report was shown to Nepal’s leading demographer, he was stunned. He thought there had been a mistake.

Walking Fish, Unicorns And Sneezing Monkeys Liven Up Himalayan Eco-Haul. For fairy-tale lovers, WWF’s latest report, ‘Hidden Himalayas: Asia’s Wonderland’ might prove a veritable delight. Common man finding ways to cope with crisis - The Himalayan Times. A Thecho resident Sanchamaiya Gole climbed down from the roof of a bus at Lagankhel. Wasn’t she scared? “It was scary, but I couldn’t find any vehicle. Besides I had to take food for our daughter-in-law admitted in the hospital, so …The price of essentials has have gone up and even shopkeepers blackmail us by telling us to buy other items to get a cylinder of gas.

As I have to pay more for the materials, I have started charging a little higher too Photo:THT Automobile US auto sales jump last month at Ford, Nissan, Fiat Chrysler Major automakers booked double-digit sales gains l... Kathmandu For the past week the one thing on one’s mind at the end of the day has been: “Today I managed to get a lift (find a space for a foot in the spilling-with-people micro bus and hang on to dear life, /caught a Safa tempo that had space in its aisle for one more standing passenger/ got a place on the roof of a bus) … will I be so lucky tomorrow?” The heart of the matter. 'I Am In Nepal Now,' Says New Tourist Campaign, But Nepal Is In Chaos : Goats and Soda.