The Garden of Eaden. Lavender is without doubt one of the most popular of all hardy shrubs, and why not? 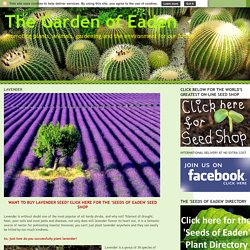 Tolerant of drought, heat, poor soils and most pests and diseases, not only does will lavender flower its heart out, it is a fantastic source of nectar for pollinating insects! However, you can't just plant lavender anywhere and they can easily be killed by too much kindness. So, just how do you successfully plant lavender? Lavender is a genus of 39 species of flowering plants that are native to Africa, the Mediterranean, South-West Asia, Arabia, Western Iran and South-East India. 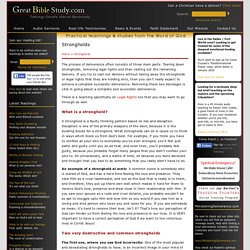 If you try to cast out demons without taking away the strongholds or legal rights that they are holding onto, then you can't really expect to achieve a complete successful deliverance. My breakup with Facebook. Two days after I’d made the New Year’s resolution to quit Facebook, I realized how much the site had been messing with my mind. 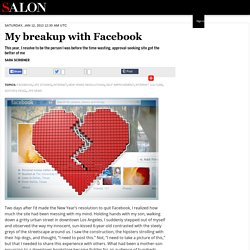 Holding hands with my son, walking down a gritty urban street in downtown Los Angeles, I suddenly stepped out of myself and observed the way my innocent, sun-kissed 6-year-old contrasted with the steely greys of the streetscape around us. I saw the construction, the hipsters strolling with their hip dogs, and thought, “I need to post this.” How Minimalism Is Going to Get Me What I Want Out of Life. There’s something you should know about me: I consider minimalism to be a big part of my life. 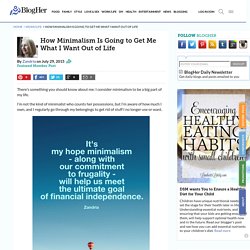 I’m not the kind of minimalist who counts her possessions, but I’m aware of how much I own, and I regularly go through my belongings to get rid of stuff I no longer use or want. Public Domain Image via Pixabay Some people refer to this as simple living, due to minimalism’s reputation for stark white walls or people who live out of backpacks. I like the word minimalism, so I’m sticking with it. 10 Things That Terrify INTPs - According to 314 INTPs - Psychology Junkie. Do you ever feel isolated or misunderstood in your fears and worries? 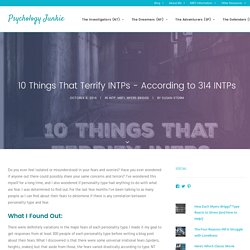 Have you ever wondered if anyone out there could possibly share your same concerns and terrors? I’ve wondered this myself for a long time, and I also wondered if personality type had anything to do with what we fear. I was determined to find out. For the last few months I’ve been talking to as many people as I can find about their fears to determine if there is any correlation between personality type and fear. What I Found Out: There were definitely variations in the major fears of each personality type. Why You Need To Try Japanese Forest Bathing - mindbodygreen. Forest bathing isn't the kind of bath where you strip down and hop in a tub. 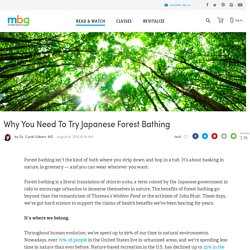 It's about basking in nature, in greenery — and you can wear whatever you want. Forest bathing is a literal translation of shinrin-yoku, a term coined by the Japanese government in 1982 to encourage urbanites to immerse themselves in nature. The benefits of forest bathing go beyond than the romanticism of Thoreau’s Walden Pond or the activism of John Muir. These days, we've got hard science to support the claims of health benefits we've been hearing for years. It’s where we belong. Shinrin-yoku: the Medicine of Being in the Forest - Shinrin-yoku, the medicine of being in the forest. Why the ‘just be yourself’ rhetoric is kinda bullsh*t. Imagine something… You are you, just as you are right now… Forever. 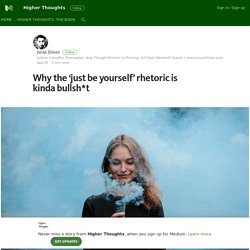 Sound soul-fulfilling? Life-affirming? Right… Me neither. Listen, I get it. Rise of the Introverts. What are the three ways to train your brain to be happy? You can train your mind to be unhappy and you can train it to be happy. 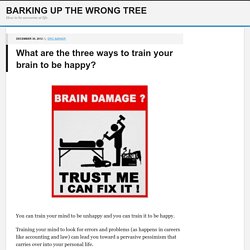 Training your mind to look for errors and problems (as happens in careers like accounting and law) can lead you toward a pervasive pessimism that carries over into your personal life. Via One Day University Presents: Positive Psychology: The Science of Happiness (Harvard’s Most Popular Course):1 I discovered the tax auditors who are the most successful sometimes are the ones that for eight to 14 hours a day were looking at tax forms, looking for mistakes and errors.

This makes them very good at their job, but when they started leading their teams or they went home to their spouse at night, they would be seeing all the lists of mistakes and errors that were around them. Book by FiftyThree. 2013: Leaving Bullshit Behind. How to Stop Giving a F*ck What People Think. Joel Robison Photography. Viewpoint: Is gap year volunteering a bad thing? Volunteering abroad to build schools or dig wells might make people feel good about themselves - but it can be detrimental to those who are supposed to be helped, writes tour company founder Daniela Papi. 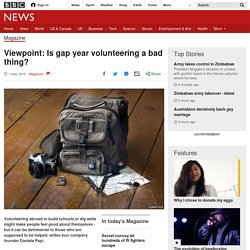 I've volunteered all over the world - building homes in Papua New Guinea, doing post-tsunami work in Sri Lanka, helping paint a school in Thailand - and I used to think it was the best way to travel. In 2005 I even organised my own volunteer trip - a bike ride across Cambodia with five friends. We were going to raise funds to build a school, and teach students we met along the way about the environment and health. 50 Things to Let Go of Before Your Next Birthday. Email When the pain of holding on is worse than the pain of letting go, it is time to let go. 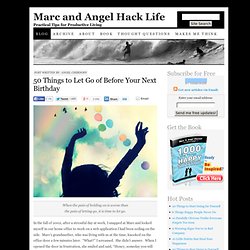 In the fall of 2002, after a stressful day at work, I snapped at Marc and locked myself in our home office to work on a web application I had been coding on the side. Marc’s grandmother, who was living with us at the time, knocked on the office door a few minutes later. “What?” I screamed. Boy was she right. Truth be told, today is the oldest you’ve ever been and the youngest you will ever be again. Before your next birthday… 24 ways to improve your iPhone's battery life. Your New Year’s Resolutions Guide. When you find yourself counting down on New Year’s Eve and welcoming 2014, what do you feel?

Do you feel excitement? Anxiety? Dullness? Relief? Everyone knows that the perfect time for making improvements to your life is at the start of a new, refreshing year. Celebrate the Past One of the first aspects of the new year that teachers overlook is that they fail to perceive it as a chance to celebrate the end of the previous year. It’s important to examine three critical areas when looking back over the course of a year. Invasive Species Alert: ZOMBIES! Welcome to this special Fresh Afield blog post. Be warned of our state’s newest invasive species threat – ZOMBIES! While zombie management is largely left to the police, military, and health agencies, conservation plays a role in protecting Missouri's fish, forest and wildlife resources – and Missourians – from this invasive species.

Hunters, campers and others in the outdoors and on conservation areas should know there is always the chance they may encounter a zombie while out in the field. Surviving Whole Foods. Whole Foods is like Vegas. You go there to feel good but you leave broke, disoriented, and with the newfound knowledge that you have a vaginal disease. Unlike Vegas, Whole Foods’ clientele are all about mindfulness and compassion... until they get to the parking lot. Then it’s war. As I pull up this morning, I see a pregnant lady on the crosswalk holding a baby and groceries. This driver swerves around her and honks. As the great, sliding glass doors part I am immediately smacked in the face by a wall of cool, moist air that smells of strawberries and orchids. The first thing I see is the great wall of kombucha — 42 different kinds of rotten tea.

Next I see the gluten-free section filled with crackers and bread made from various wheat-substitutes such as cardboard and sawdust. Next I approach the beauty aisle. A Time to be Overcome 9.11.11. "Overcome" Live even now the world is bleedin' but feelin' just fine all numb in our castle where we're always free to choose never free enough to find i wish somethin' would break cuz we're runnin' out of time and i am overcome i am overcome holy water in my lungs i am overcome these women in the street pullin' out their hair my master's in the yard givin' light to the unaware this plastic little place is just a step amongst the stairs.