After the earthquake and blockade, the winter

The Age of AI: What You Need to Know to Prepare for Synthetic Intelligence. In Brief The future of artificial intelligence is at the end of a hazy and, for some, scary path. 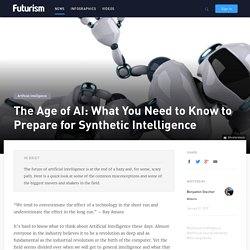 Here is a quick look at some of the common misconceptions and some of the biggest movers and shakers in the field. “We tend to overestimate the effect of a technology in the short run and underestimate the effect in the long run.” – Ray Amara It’s hard to know what to think about Artificial Intelligence these days. Almost everyone in the industry believes it to be a revolution as deep and as fundamental as the industrial revolution or the birth of the computer. It seemed to frame every discussion the world leaders at Davos had this week, and with 2017 poised to be a big year for AI, it makes sense to try and understand where it is taking us.

Machine Learning The most important subset of AI is machine learning. A key driver behind machine learning is the rise of big data. For an introduction to the nuts and bolts of machine learning watch this… Opportunities for investment & innovation in Nepal's energy system - MaRS. In May 2015 (after Nepal’s devastating earthquake), the Advanced Energy Centre wrote that “Nepal’s energy sector is full of untapped potential” both for large-scale investments (in hydro) and small-scale, innovative projects such as SunFarmer’s solar projects (MaRS Cleantech Venture Services company) and the World Bank’s micro hydro power plant. 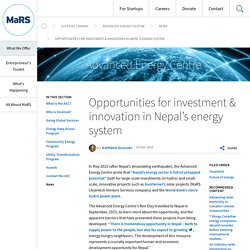 The Advanced Energy Centre’s Ron Dizy travelled to Nepal in September, 2015, to learn more about the opportunity, and the apparent barriers that have prevented these projects from being developed. “There is tremendous opportunity in Nepal – both to supply power to the people, but also for export to growing , energy hungry neighbours. The development of this resource represents a crucially important human and economic development opportunity for Nepal.” High rates of solar radiation and strong wind characteristics also indicate substantial prospects for the development of diversified renewable generation in the country.

Waiting for 200,000. In Singati, people may not be able to read and write, but they know exactly what is causing the delay. 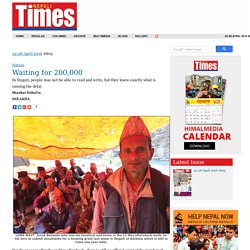 Disastrous coverage. Photo: Bikram Rai Given their short attention spans, limited capacity to capture context, and the scripted narrative of international news, reporters cannot be entirely blamed for their unidimensional coverage of disasters. 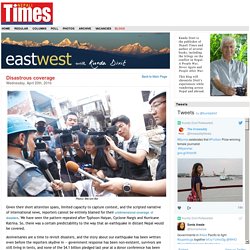 We have seen the pattern repeated after Typhoon Haiyan, Cyclone Nargis and Hurricane Katrina. So, there was a certain predictability to the way that an earthquake in distant Nepal would be covered. Anniversaries are a time to revisit disasters, and the story about our earthquake has been written even before the reporters skydive in — government response has been non-existent, survivors are still living in tents, and none of the $4.1 billion pledged last year at a donor conference has been spent. The truth, as we know, is little more complex. Nepali Times Buzz. Pics: Gopen Rai HOME: Since losing her home in the earthquake last year Nirmala Shrestha and her family have been sharing this rickety shelter in Bungamati. 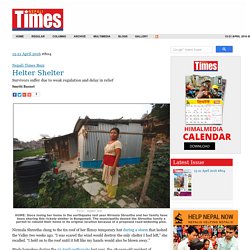 The municipality denied the Shrestha family a permit to rebuild their home in its original location because of a proposed road-widening plan. NRA to allow NGOs in rebuilding homes. Apr 11, 2016- Nearly a year after devastation by the Gorkha earthquake, the National Reconstruction Authority is set to engage non-government organisations in rebuilding houses. 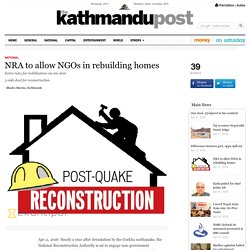 The NRA had temporarily barred the NGOs from helping families reconstruct their homes. The authority’s Directive Committee on Sunday endorsed guidelines related to the mobilisation of NGOs, reversing the past decision. Officials, however, said NGOs’ work would be thoroughly monitored. The tale of two tragedies. 2016 is the 20th anniversary of the start of the Maoist conflict and this month marks the 10th year after it ended. 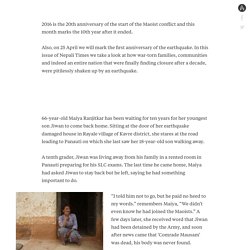 Also, on 25 April we will mark the first anniversary of the earthquake. In this issue of Nepali Times we take a look at how war-torn families, communities and indeed an entire nation that were finally finding closure after a decade, were pitilessly shaken up by an earthquake. Harry aims to 'shine a light' on tragic nepal where earthquake killed thousands. By Press Association Published: 20:12 GMT, 16 March 2016 | Updated: 20:12 GMT, 16 March 2016 Prince Harry has said he hopes his forthcoming trip to Nepal will "shine a light" on the country as it rebuilds following last year's devastating earthquake. 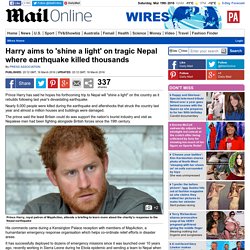 Nearly 9,000 people were killed during the earthquake and aftershocks that struck the country last year and almost a million houses and buildings were damaged. The prince said the least Britain could do was support the nation's tourist industry and visit as Nepalese men had been fighting alongside British forces since the 19th century. Water crisis spells cold comfort for Nepal earthquake survivors. It is an hour before dawn, and on the slopes below Barkobot village in Nepal’s Sindhupalchowk district, a small crowd of women are already waiting to fill up their water pots from a single plastic hose. 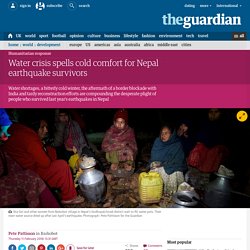 It will be a lengthy interlude. After the massive earthquake that struck Nepal on 25 April last year, the main water source in the village dried up. Since then, people have had to rely on a slender pipe as their chief source of drinking water, but all that comes out is a thin trickle. It takes almost an hour to fill a 20-litre pot. Nepal’s noodle billionaire steps in to help the earthquake-affected. Nepal′s needy running on empty. 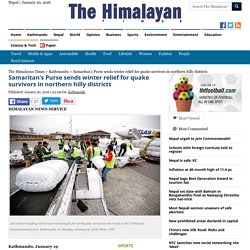 Photo: THT Sports Aston Villa put league troubles aside to advance in FA Cup Aston Villa forgot their Premier League woes and m... Health Various reasons to foul smelling stool I am a 20-year-old man. My problem is regarding un... Fishy, fishy. Female quake victims deprived of identity cards. Manu Humagain of National Women Council says the government must reassess the number of earthquake victims Jan 18, 2016- The government formally kick-started the post-earthquake reconstruction works on Saturday, but this has not brought joy to the earthquake survivors who have still not received the victims’ identity cards so far.They fear they could be left out in the reconstruction and rehabilitation programmes.Sarita Tamang, a 25-year-old widow and a mother of three, has not received the identity card.

Tamang, who hails from Syampati village in Kavre, lost her husband over two years. Nepal formally begins much delayed earthquake reconstruction. Nepalese girls Asmita Tamang and Roji Tamang demolish their house which was destroyed during an earthquake at Sankhu, on the outskirt of capital Kathmandu, Nepal. (Narendra Shrestha/EPA) By Binaj Gurubacharya January 16 BUNGMATI, Nepal — Nepal officially launched the much-delayed reconstruction of about 1 million homes and buildings Saturday, nearly nine months after they were damaged by a devastating earthquake that killed 9,000 people.

Prime Minister Khadga Prasad Oli unveiled plans to rebuild Bungmati, an old town just south of Kathmandu, to initiate the reconstruction campaign that is expected to take years and cost billions of dollars. President Bidhya Devi Bandhari laid the foundation stones for rebuilding a temple and garden with a pond next to it in Kathmandu. It is still not clear when work on other, more devastated, areas will begin, and people in northern mountain villages who are living in tents in freezing weather will probably have to wait for months.

Quake victims now reel under soaring prices. SINDHUPALCHOWK, Jan 15: At the youngish age of 15, Suman Lama of Gumba VDC-3, Sindhupalchowk district shoulders a huge responsibility. When food items and other daily essentials run out, he goes to Kartike Bazaar with a bamboo basket and returns home laden with enough supplies, including oil, salt, sugar and noodles, for a few months. "Prices of daily necessities have soared after the earthquake. Arbitrary price hikes are making our lives very difficult," said Suman. He has to walk uphill for three hours with the heavy load on his back to reach home. Chandra Lal and Saili Tamang, a married couple from Panggarpu village, got into a minor argument recently with a shopkeeper over the high price of commodities.

"Prices have reached a new height recently. Snowfall adds to suffering of Gorkha quake survivors. Quake-hit in Gorkha wrestle with blizzard. Army helicopter loaded with relief materials returned to the district headquarters as it could not land in the area. Reconstruction to begin only after mid-April. Earthquake Prediction: Nepal to begin much-delayed earthquake reconstruction. Back in Barpak. Perched on top of terraced slopes and commanding a stunning view of Bauddha Himal, Barpak was once famous for its bucolic setting popular with homestay backpackers, relatively good infrastructure and round-the-clock electricity.

BBC World Service - Newshour, Nepal 'Blockade' Hampers Quake Recovery. Sick of the cold. On a freezing morning last week, 65-year-old Sanman Majhi woke up before dawn and left his tin hut to collect firewood. SHIVERING IN SHELTERS. Relief amount for quake-hit in 10 days. World Saudi Arabia says 47 executed on terror charges, including Shi’ite cleric Saudi Arabia executed 47 people on Saturday for te... My Republica - "Reconstruction authority to take some time to be up and running" KATHMANDU, Dec 30: Although hopes were high that reconstruction and rehabilitation work in the earthquake-affected areas would begin immediately with the appointment of a chief executive officer (CEO) at the National Reconstruction Authority (NRA), newly appointed CEO Sushil Gyewali himself has said that it will take some more time for the authority to commence its work.