Free ebooks from Microsoft Press. Build Your Private Cloud: Installing Virtual Machine Manager – Step by Step. Our series is in full swing and now its time to walk through the installation of System Center 2012 VMM to begin managing our VMware, Hyper-V, and Xen hosts, virtual machines, and templates. 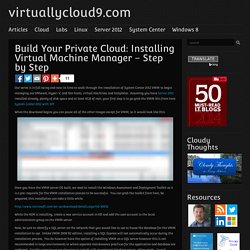 Assuming you have Server 2012 installed already, plenty of disk space and at least 4GB of ram, your first step is to go grab the VMM bits from here: System Center 2012 with SP1 When the download begins you can pause all of the other images except for VMM, so it would look like this: Once you have the VMM server OS built, we need to install the Windows Assessment and Deployment Toolkit as it is a pre-requisite for the VMM installation process to be successful. You can grab the toolkit from here, be prepared, this installation can take a little while: While the ADK is installing, create a new service account in AD and add the user account to the local administrators group on the VMM server. Select both options and click on Next: Enter in the correct information for your organization and click Next: Untitled. How to Integrate Fabric Updates with Configuration Manager. Updated: January 22, 2014 Applies To: System Center 2012 - Virtual Machine Manager, System Center 2012 R2 Virtual Machine Manager, System Center 2012 SP1 - Virtual Machine Manager Virtual Machine Manager (VMM) supports using a WSUS server that is part of a Configuration Manager environment. 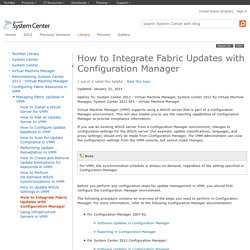 The VMM administrator can view the configuration settings from the VMM console, but cannot make changes. Before you perform any configuration steps for update management in VMM, you should first configure the Configuration Manager environment. VMM 2012 System Requirements. The official TechNet content is a bit scattered about so I through I’d reorganise it and consolidate to make stuff easier to find. 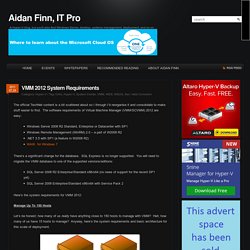 The software requirements of Virtual Machine Manager (VMM/SCVMM) 2012 are easy: Windows Server 2008 R2 Standard, Enterprise or Datacenter with SP1Windows Remote Management (WinRM) 2.0 – a part of W2008 R2.NET 3.5 with SP1 (a feature in W2008 R2)WAIK for Windows 7 There’s a significant change for the database. SQL Express is no longer supported. You will need to migrate the VMM database to one of the supported versions/editions: 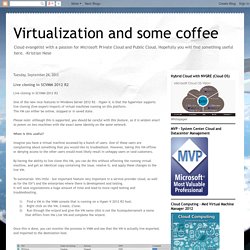 The VM can either be online, stopped or in saved state. Please note: although this is supported, you should be careful with this feature, as it is seldom smart to power on two machines with the exact same identity on the same network. When is this useful? Imagine you have a virtual machine accessed by a bunch of users. By having the ability to live clone this VM, you can do this without affecting the running virtual machine, and get an identical copy containing the issue, resolve it, and apply these changes to the live VM. To summarize: this little – but important feature very important in a service provider cloud, as well as for the ISV’s and the enterprises where there is development and testing. Failover Cluster Step-by-Step Guide: Configuring Accounts in Active Directory. Updated: July 1, 2010 Applies To: Windows Server 2008, Windows Server 2008 R2 In Windows Server 2008, when you create a failover cluster and configure clustered services or applications, the failover cluster wizards create the necessary Active Directory computer accounts (also called computer objects) and give them specific permissions. 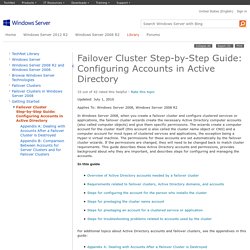 The wizards create a computer account for the cluster itself (this account is also called the cluster name object or CNO) and a computer account for most types of clustered services and applications, the exception being a Hyper-V virtual machine. The permissions for these accounts are set automatically by the failover cluster wizards. If the permissions are changed, they will need to be changed back to match cluster requirements. In this guide For additional topics about Active Directory accounts and failover clusters, see the appendixes in this guide: The user account used to create the cluster. Logon failure: unknown user name or bad password. Install SQL Server 2012 Step By Step. This tutorial will step you through installing SQL Server 2012. 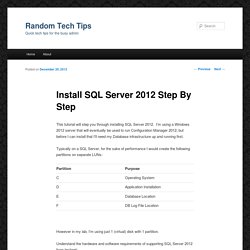 I’m using a Windows 2012 server that will eventually be used to run Configuration Manager 2012, but before I can install that I’ll need my Database infrastructure up and running first. Typically on a SQL Server, for the sake of performance I would create the following partitions on separate LUNs: However in my lab, I’m using just 1 (virtual) disk with 1 partition. Understand the hardware and software requirements of supporting SQL Server 2012 from technet: Prior to installing SQL Server 2012, install .NET Framework 3.5 from Roles and Features. Insert DVD/Mount ISO and click Setup.exe You will be prompted with SQL Server Installation Center – click Installation from the left hand side, then click New SQL Server stand-alone installation from the right hand side In Setup Role, I select All Features With Defaults: However I will uncheck the following as they’re not required in this environment: HYPER-V,SYSTEM CENTER AND AZURE: Monitoring: Integration Between SCVMM 2012 R2 and SCOM 2012 R2. 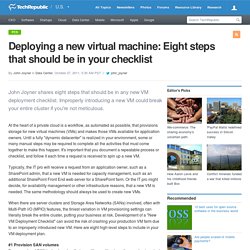 Improperly introducing a new VM could break your entire cluster if you're not meticulous. At the heart of a private cloud is a workflow, as automated as possible, that provisions storage for new virtual machines (VMs) and makes those VMs available for application owners. Until a fully "dynamic datacenter" is realized in your environment, some or many manual steps may be required to complete all the activities that must come together to make this happen. It's important that you document a repeatable process or checklist, and follow it each time a request is received to spin up a new VM. Typically, the IT pro will receive a request from an application owner, such as a SharePoint admin, that a new VM is needed for capacity management, such as an additional SharePoint Front End web server for a SharePoint farm. 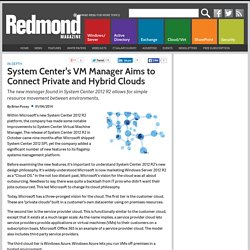 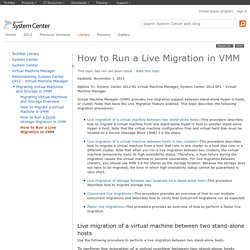 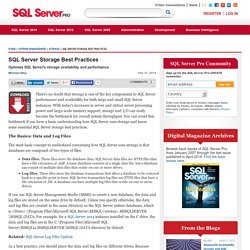 With today's increases in server and virtual server processing power and large-scale memory support, storage and I/O can easily become the bottleneck for overall system throughput. You can avoid this bottleneck if you have a basic understanding how SQL Server uses storage and know some essential SQL Server storage best practices. The Basics: Data and Log Files The most basic concept to understand concerning how SQL Server uses storage is that databases are composed of two types of files: Data files. If you use SQL Server Management Studio (SSMS) to create a new database, the data and log files are stored on the same drive by default.

Failover clustering is part of the foundation for Dynamic Datacenter and technologies such as live migration. With Server 2012 and the improvements in the new Server Message Block (SMB) 3.0 protocol, failover clustering has been further expanded to enable continuously available file shares. Using WSUS with Microsoft Virtual Machine Manager. What is WSUS? The Windows Server Update Service (WSUS) enables information technology administrators to deploy the latest Microsoft product updates.

By using WSUS, administrators can fully manage the distribution of updates that are released through Microsoft Update to computers in their network. This blog shows an overview of this server role and more information about how to deploy and maintain WSUS via Microsoft Virtual Machine Manager 2012. The WSUS server provides the features that administrators need to manage and distribute updates through a management console.

This month, Hyper9 launched VMM into general availability, out of beta. What this means to you is that you can now purchase their VMM (Virtualization Mobile Manager) to allow you to use your iPhone, Blackberry, Windows Mobile device, or Google Android phone to manager VMware vSphere, Hyper-V, and Citrix XenServer. Unlike many of the third party products for your virtual infrastructure, VMM is inexpesive at only $199.

Updated: August 13, 2014 Applies To: System Center 2012 R2 Data Protection Manager The DPM Setup Wizard guides you through the process of specifying DPM configuration settings, and automatically installs or provides links to install the prerequisite software as part of the integrated DPM installation process. Set up the SQL Server database for DPM. Updated: September 17, 2014.