Edward Scissorhands Film Analysis. The misfit visions of Tim Burton. The gothic imagination of tim burton. THE DARK WORLD OF TIM BURTON: Auteur Outsider. An analysis of Tim Burton's works. Auteur Tim Burton - Home. Tim%20Burton%20OUTLINE. The diary of a film history fanatic. I have loved the work of Tim Burton as long as I can remember. 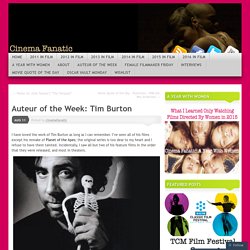 I’ve seen all of his films – except his remake of Planet of the Apes; the original series is too dear to my heart and I refuse to have them tainted. Incidentally, I saw all but two of his feature films in the order that they were released, and most in theaters. What I love so much about Burton is how distinctive his style is. You see one of his films and you know you’re watching a Burton film. He is unlike any modern filmmaker and no modern filmmaker is like him.

Tim Burton was born in 1958 in Burbank, California. This film is an homage to and parody of 1931’s Frankenstein, based on the classic Mary Shelley novel. As I said earlier, Burton was hand-picked by Reubens to direct this film. Burton’s next film was 1988’s Beetlejuice, which he picked due to the script’s originality. His next film was 1989’s Batman. I saw 1992’s Batman Returns in theaters and Danny DeVito’s performance as The Penguin gave me nightmares. Like this: Tim Burton as an Auteur. ﻿﻿﻿The auteur theory is the ideology that a director can earn a higher status than others, by having a consistent unique style that is instantly recognizable to the audience, as to who directed. ﻿ 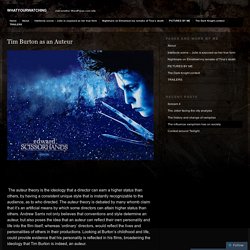 The auteur theory is debated by many whomb claim that it’s an artificial means by which some directors can attain higher status than others. Andrew Sarris not only believes that conventions and style determine an auteur, but also poses the idea that an auteur can reflect their own personality and life into the film itself, whereas ‘ordinary’ directors, would reflect the lives and personalities of others in their productions. Auteur Director – Tim Burton. 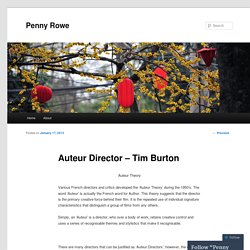 The word ‘Auteur’ is actually the French word for Author. This theory suggests that the director is the primary creative force behind their film. It is the repeated use of individual signature characteristics that distinguish a group of films from any others. Tim Burton - So The Theory Goes. The auteur theory was first developed by New Wave directors, including Jean-Luc Goddard, as a way of distinguishing those who merely follow scripts and stick to the limitations placed on them by studios from those who impose their own vision onto their projects. 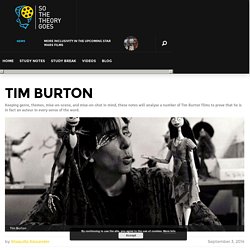 This theory has its fair share of critics. There are those who see film-making as a collective effort, and therefore it is unfair to see the final product as the sole work of the director. There are also actors, lighting and sound engineers, set designers, make-up artists, cinematographers, composers, screenwriters and film editors involved in the process who contribute a great deal to the project.

While most of these artists contribute to the overall mise-en-scene (set design, character’s behaviour,…), auteur critics do acknowledge that it is the mise-en-shot (camera positioning, duration of each shot, framing) that make the difference between films and can distinguish certain directors from everyone else. 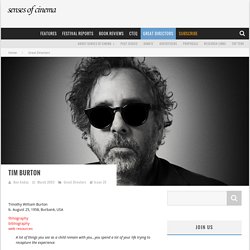 August 25, 1958, Burbank, USA filmographybibliographyweb resources A lot of things you see as a child remain with you…you spend a lot of your life trying to recapture the experience. – Tim Burton (1) A dark and misty night begins once again. In the recent history of film, few people have actually created something so original that it could affect the whole industry. Born in Burbank, California, Burton is, quite literally, a child of Hollywood—albeit a child who was considered by those around him, and by himself, a misfit who spent his days feeding on a steady diet of horror and science fiction.

I grew up watching things like The Brain that Wouldn’t Die on Saturday afternoon television. In a typical suburbanised area in Hollywood, this was, not surprisingly, considered strange behaviour. Long and tedious hours were burned away as Burton worked continuously on creating ideas for Disney. This strange character is, symbolically at least, Burton himself. Filmography. Analysis of Art & Design in Tim Burton’s Films. Tim Burton is one of Hollywood’s most successful filmmakers. 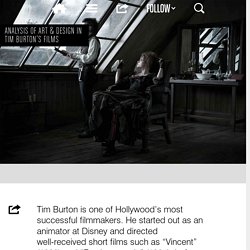 He started out as an animator at Disney and directed well-received short films such as “Vincent” (1982) and “Frankenweenie” (1984), before making the leap into feature-length movies. He made his big screen debut in 1985 with “Pee-Wee’s Big Adventure.” From that, Burton has built a remarkable career. His visual style is unique, bringing together 19th and 20th century European art aesthetics and American kitsch. Stories very often focused on freaks and loners that should, in theory, make studio executives run a mile. Johnny Depp and Helena Bonham-Carter in “Sweeney Todd: The Demon Barber of Fleet Street.”