Conspiracy For Good - Tim Kring. Tim Kring, Creator of the hit television show 'Heroes' tells how the big idea began, and where you can jump in. 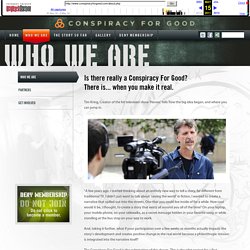 "A few years ago, I started thinking about an entirely new way to tell a story, far different from traditional TV. I didn't just want to talk about 'saving the world' in fiction, I wanted to create a narrative that spilled out into the streets. One that you could live inside of for a while. How cool would it be, I thought, to create a story that exists all around you all of the time? On your laptop, your mobile phone, on your sidewalks, as a secret message hidden in your favorite song or while standing at the bus stop on your way to work. And, taking it further, what if your participation over a few weeks or months actually impacts the story's development and creates positive change in the real world because a philanthropic mission is integrated into the narrative itself? The Conspiracy For Good is the culmination of this dream. To achieve this, I need you to participate. Nokia. Tim Kring. Kring is Jewish.[1] He graduated from the University of Southern California School of Cinematic Arts in 1983.[2] On February 22, 2014, during its Olympics coverage, NBC announced Heroes is coming back as a 13-episode event miniseries titled Heroes Reborn. 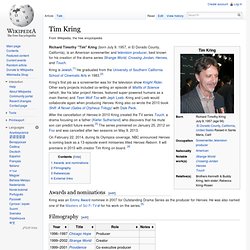 CFG combines Kring's original storytelling (www.ConspiracyForGood.com/about) and Nokia's Ovi platform (www.ovi.com) to create a dramatic, fictional experience using interactive theatre, mobile and alternate reality gaming (ARG), music and physical participation to do good in the world Participants will become part of the plot development and will find the necessary tools and clues to move the narrative forward and into the real-world, ultimately creating social and educational change for the Chataika Basic School, located in the village of Chataika in eastern Zambia. As to the plot of Shift, co-written by Kring and Dale Peck: “A new caliber of thriller set at the collision of '60s counterculture and the rise of dark forces in world government.

TimKring2:45- on CFG being pilot for multiseason project Shift. Interview: Tim Kring talks transmedia, mobile and the Conspiracy For Good. SCVNGR might look like a relatively recent entrant to the social location space, competing with services like Foursquare, MyTown and Gowalla. 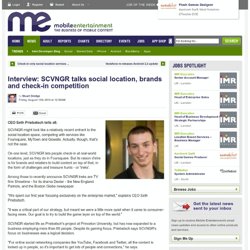 Actually, though, that's not the case. On one level, SCVNGR lets people check-in at real-world locations, just as they do in Foursquare. But its raison d'etre is for brands and retailers to build content on top of that, in the form of challenges and treasure hunts - or 'treks'. Among those to recently announce SCVNGR treks are TV firm Showtime - for its drama Dexter - the New England Patriots, and the Boston Globe newspaper. "We spent our first year focusing exclusively on the enterprise market," explains CEO Seth Priebatsch. "It was a critical part of our strategy, but meant we were a little more quiet when it came to consumer-facing news. SCVNGR started life as Priebatsch's project at Princeton University, but has now expanded to a business employing more than 65 people. "Location-based social media has a bifurcated problem though.

Tim Kring, Creator of Heroes, Talks about Nokia Point & Find‬‎ Amazon Gate of Orpheus Trilogy. Dale Peck. This Thursday at 7 pm I’ll be reading as part of the Animal Farm series, which is held, appropriately, at Happy Ending, located at 302 Broome St. 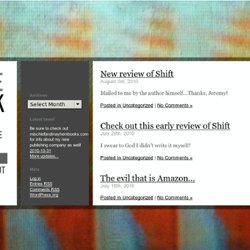 I haven’t decided fully decided what I’m reading yet, but it will be something unpublished, and I promise sex or violence, and quite possibly both. Full description below. “All reading series are equal, but some reading series are more equal than others.” In the spirit of that heroic leader of animals, Napoleon, in George Orwell’s novel, Animal Farm, the Animal Farm Reading Series is dedicated to the promotion of equality between writers—especially the most famous and respected writers.

Animal Farm is your destination for the newest and best writing with a satirical and/or critical sensibility. In addition to new writing by great writers, every event at Animal Farm will also feature Field Reports. Animal Farm is the second Thursday of every month at 8:00 pm. Daniel Guzmán and Patrick W. Patrick W. Crown nabs Tim Kring's book trilogy - Entertainment News, TV News. Conspiracy for Good: How Tim Kring Built a Phenomenon.