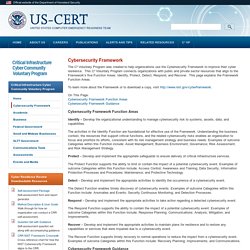 The Protect Function supports the ability to limit or contain the impact of a potential cybersecurity event. Internet of Things security is dreadful: Here's what to do to protect yourself. British parents haven't learnt their lesson from the discovery two years ago of a Russian website that offered links to unsecured baby monitors, according to the UK's privacy watchdog. 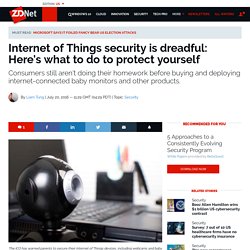 This has prompted the Information Commissioner's Office (ICO) to reissue its wake-up call from 2014 to parents over the security of baby monitors. Two years on from the discovery of the Russian site, the ICO says parents still haven't changed their behaviour, and it's calling on them to take responsibility for the security of their devices. IoT devices can be hacked in minutes, warn researchers. A number of internet-connected devices are so lacking in even the most basic cybersecurity protocols that it's possible to hack them in as little as three minutes, allowing cyberattackers to steal data, conduct espionage on enterprise activities, or even cause physical damage. 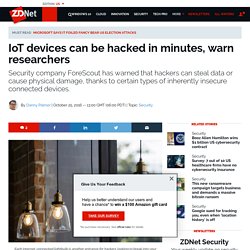 The poor security in Internet of Things products -- including IP connected security systems, connected climate control and energy meters, smart video conferencing systems, connected printers, VoIP phones, smart fridges, and even smart lightbulbs -- pose an inherent risk to the security of organisations which deploy them, researchers have warned. The dangers of such devices are outlined in ForeScout's IoT Enterprise Risk Report, which is based upon research by ethical hacker Samy Kamkar -- and it doesn't make good reading for IoT product vendors or organisations which have deployed such items.

Security Experts Shed Light on the Mirai Botnet. We gather a virtual panel of security professionals to provide an analysis of what happened last Friday, and what is in store for the future. 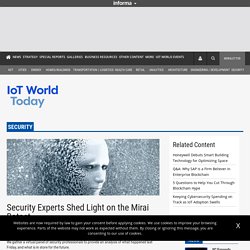 Despite all of buzz about IoT security over the past couple of years, last Friday’s Mirai botnet still seemed surprising. Now, the consensus from many in the security industry is that the state of IoT security is likely to get worse before it improves. Now, the security firm Corero has discovered a new DDoS attack that could potentially make botnets like Mirai 55 times more powerful. In the following Q&A, we ask five cybersecurity experts to share their perspective on the Mirai botnet and to provide advice on how to avoid future DDoS attacks. How did it happen that a botnet seemingly wiped out half the Internet last Friday? Pablos Holman, security expert and inventor at the Intellectual Ventures Lab: Hackers don’t usually have a plan. These are the key things going on:1. Three necessary steps are: Guri: This by itself is not an issue. Pore: Right. IoT security risks include botnet attacks and data breaches. By now you have heard that IoT security is a problem. 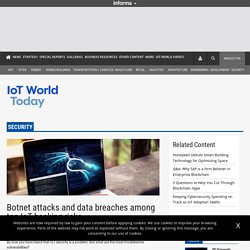 But what are the most-troublesome vulnerabilities? Two U.S. senators, Mark Warner (R-Va.) and Cory Gardner (D-Colo.), just debuted a measure known as the Internet of Things Cybersecurity Improvement Act of 2017 that aims to “provide minimal cybersecurity operational standards for Internet-connected devices purchased by Federal agencies, and for other purposes.” It’s telling that two politicians would take an interest in IoT hacking, which can include breaches of everything from IP cameras to fitness watches to thermostats. While such devices are designed to make our lives more convenient, the senators and a growing number of people are beginning to wonder: what happens when they turn bad?

These seemingly innocent devices, which many of us have welcomed into our lives, can be unwillingly infected or hacked and thus join the dark side. Casino Gets Hacked Through Its Internet-Connected Fish Tank Thermometer. What devices around you could be easily hacked? The security of smart devices is a hot topic. 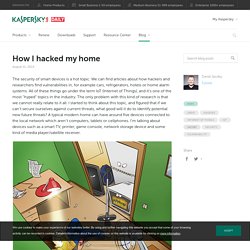 We can find articles about how hackers and researchers find vulnerabilities in, for example cars, refrigerators, hotels or home alarm systems. All of these things go under the term IoT (Internet of Things), and it’s one of the most “hyped” topics in the industry. How to hack and crack the connected home. Media playback is unsupported on your device There are intruders in your home, ones that came with claims that they would make your life easier, that they could take over some of the drudgery so you could pursue some of life's finer pleasures. 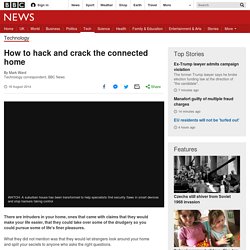 What they did not mention was that they would let strangers look around your home and spill your secrets to anyone who asks the right questions. These are not people letting you down, they are smart gadgets that will form what is known as the Internet of Things. Examples of sm,art devices being used to hack - Recherche Google. The 5 Worst Examples of IoT Hacking and Vulnerabilities in Recorded History. IoT is in no way immune to hacking. 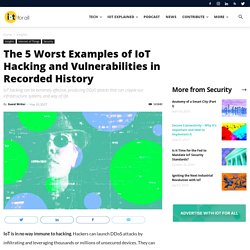 Hackers can launch DDoS attacks by infiltrating and leveraging thousands or millions of unsecured devices. They can cripple infrastructure, down networks, and as IoT advances into our everyday lives, those attacks may very well put real human lives in jeopardy. The 5 Worst Examples of IoT Hacking and Vulnerabilities in Recorded History. Join Validation : Validation. HND Computing: Cybersecurity and Ethical Hacking - West Herts College.