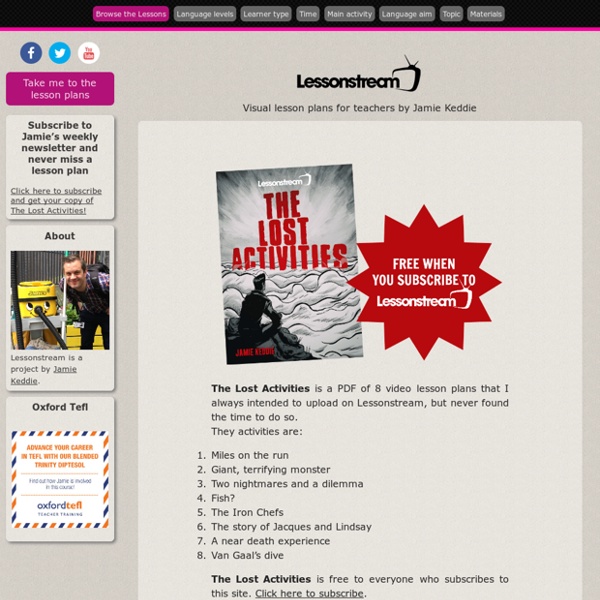 Lesson plans A set of lesson plans and worksheets for use in first lessons in business English. As you look at the lesson plan and worksheets, use the wish list grid to tick off the points on the ‘Wish list’ you think they achieve. Does the number of ticks really denote a good lesson? Further suggestions Depending on the materials used, the materials and lesson plan provided here seem to cover all the points down to number 21 (learn something about how to study English).This point could be added by providing students with a language reference section on numbers or tenses to check their answers against before going through it as a class.Tips on self-study (22) could be added simply by telling the students where these language reference sections came from and where they can buy the book.Homework (25) could be practice exercises from the same or a similar book.

10 Creative Ways to Use Popular Movies in Fun ESL Lessons Bored of book work? Tired of teacher-talking? Want something exciting for your students? Testing and assessment It was all made worse by the fact that the chemistry teacher read the results to the whole class, from first to last place. My humiliation was complete. Students can have very negative reactions towards tests and it's no surprise when they too may have had experiences like this. Why testing doesn't work Reasons for testing Making testing more productive Learning from tests Alternatives to testing Conclusions Why testing doesn't work There are many arguments against using tests as a form of assessment:

Picture to story Preparation Prepare a set of pictures that are likely to stimulate the interest and imagination of your students. Procedure Extr@ – Learn English with videos A cool TV series, a funny sitcom, and an English course, all wrapped in one single package to make Extr@, the perfect way of learning natural English having fun.SEE THE OTHER EPISODES HERE !Do extr@ activities hereAnnie and Bridget share a flat. Their next-door neighbour Nick is a disorganized, humorous macho fellow. Bridget's Argentinean penpal, Hector, comes to London to visit her.

Free ESL (English as a Second Language) Lesson Plans to Download This page was originally designed to share my materials with other English teaching assistants in France, especially those who have no experience in teaching ESL yet. I've also included worksheets that I used for private English lessons in France as well as some of the materials I used in my ESL classes in the United States. Feel free to use them as you'd like. Some of the lessons listed under the Assistant section can also be used for private lessons and vice versa. There is a page of English grammar if you need a review.

How to get film-based lessons right Have you ever shown films to your class, or considered setting up a film club? Daryn Simon, Head of History at Ysgol Bryn Alyn, and Beatrix Clark of Into Film share some advice. Why show films in the classroom? Using film in the classroom is particularly effective in developing children's literacy skills. The Leeds Partnership Project, in which pupils regularly watched and made films, recorded a 96 per cent improvement in reading, compared with the previous term, and a 60 per cent improvement in writing. Evaluating speaking For example, speakers need to pronounce individual sounds clearly, understand the functions of language, and follow the conventions of turn-taking. The second part of this article looks at whether these different elements can be evaluated formally, and what ways there are to do this. In the third part of this article we will look at how these competencies can be evaluated, with specific discussion of the IELTS speaking test. What speakers do Phonological features of speech Following the rules of language Paralinguistic devices Communicative functions Social meaning Conclusion What speakers do Speaking is a complex act with many different elements interacting to produce effective communication.

New York Times lesson plans Photo Do your students follow Humans of New York? The site and the related Tumblr and Facebook page created by the amateur photographer Brandon Stanton have millions of followers, and the “Humans of New York” book, published in October, landed in the No. 1 spot on the New York Times hardcover nonfiction best-seller list its first week on sale. As the Times article about the phenomenon puts it: Mr. Stanton — a hybrid of interviewer, photographer and eager chronicler of street life — said this week that he was still stunned by the runaway success of his book, which has more than 145,000 copies in print.

Role-play A selection of lesson plans that focus on role-play activities. Scenarios include an office social event, a wedding party and a New York blackout. AmnestyNew president offers amnesty. Soar Genre(s): Adventure A young girl helps a tiny boy to fly home before it's too late! Use this delightful animated film in your classroom with our collection of cross-curricular teaching ideas and activities! English The title of this film is 'Soar'. Can you think of synonyms for this word?

Five mixed messages that have severely damaged modern language education Introduction Over the decades, since the 70’s pedagogic revolution which saw the total rejection of Grammar-Translation methodology and Audiolingualism, teachers have been the recipients of scores of mixed messages about how languages are acquired and should be taught which have greatly damaged the teaching profession and Modern Language provision at large. I referred to them in the title as ‘mixed messages’ because they have often been the result of the overgeneralization , misinterpretation, vulgarization or distortion of research findings, hypotheses or even theories of some validity, which have given rise to ‘myths’ about language teaching and learning that have been haunting the teaching profession for decades and still shape in many cases the way many of us teach. 1.Languages are acquired by children subconsciously, hence no need to teach them grammar – This belief is at the root of the ban on grammar teaching that affected MFL provision in England for decades. 2. Conclusion

The EFL SMARTblog: Merry Christmas Mr Bean Teacher's note; The activities in the worksheet at the bottom of this post are based on the full episode available on DVD or on cannot be embedded here). This post contains some exercises based on the embeddable youtube clips. The answers are in the worksheet. DVD availablehere Mr Bean celebrates the traditional British Christmas: the baubles, the crackers, the nativity scene, the carols, the presents, the turkey and the mistletoe... they are all here.