CH210: Age of the Earth. Primordial weirdness: Did the early universe have one dimension? Scientists outline test for theory. That's the mind-boggling concept at the heart of a theory that University at Buffalo physicist Dejan Stojkovic and colleagues proposed in 2010. 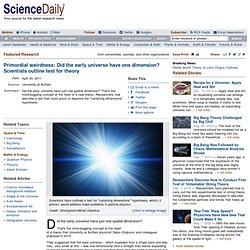 They suggested that the early universe -- which exploded from a single point and was very, very small at first -- was one-dimensional (like a straight line) before expanding to include two dimensions (like a plane) and then three (like the world in which we live today). The theory, if valid, would address important problems in particle physics. Now, in a new paper in Physical Review Letters, Stojkovic and Loyola Marymount University physicist Jonas Mureika describe a test that could prove or disprove the "vanishing dimensions" hypothesis.

Universe Sandbox. WIKISKY.ORG. The end of the net as we know it. Posted on 21 Jan 2011 at 13:34 ISPs are threatening to cripple websites that don't pay them first. 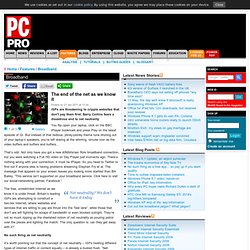 Barry Collins fears a disastrous end to net neutrality You flip open your laptop, click on the BBC iPlayer bookmark and press Play on the latest episode of QI. Welcome - Synergy. Audio Highs. Chronology of Events in Science, Mathematics, and Technology. Graphene Will Change the Way We Live. The theory behind the substance graphene was first explored by theoretical physicist Philip Wallace in 1947 as kind of a starting point when he was doing research trying to understand the electronic properties of more complex, 3D graphite. although the name graphene wasn't actually coined until 40 years later, where it was used to describe single sheets of graphite. 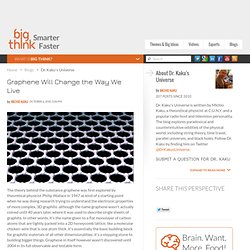 In other words, it's the name given to a flat monolayer of carbon atoms that are tightly packed into a 2D honeycomb lattice; like a molecular chicken-wire that is one atom thick. It's essentially the basic building block for graphitic materials of all other dimensionalities; it's a stepping stone to building bigger things. Graphene in itself however wasn't discovered until 2004 in its full observable and testable form.

World of Ends - what the internet is. Educated Earth // Science Videos, Images, News. Earth View. Canister lets you add water (or bodily fluids) to recharge batteries. SiGNa Chemistry Inc. is launching a hydrogen-producing cartridge, the mobile-H2™, that will work with a portable, pocket-sized fuel cell charger to provide instant power for cell phones and other mobile devices. 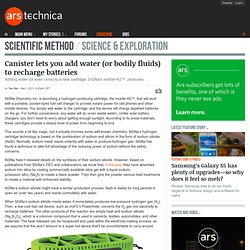 You simply add water to the cartridge, and the device will charge depleted batteries on the go. For further convenience, any water will do (even waste water). Unlike solar battery chargers, you don’t need to worry about getting enough sunlight. According to its press materials, these cartridges provide a steady level of power from beginning to end. This sounds a bit like magic, but it actually involves some well-known chemistry.

The Register. Are You Living in a Computer Simulation? Watch this 3D printer make a tiny Gothic cathedral – New Tech Gadgets &amp; Electronic Devices. Brief Answers to Cosmic Questions. Structure of the Universe Does the Universe have an edge, beyond which there is nothing? 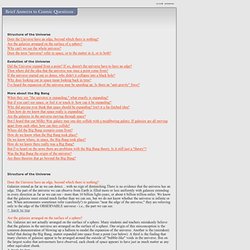 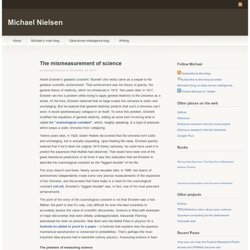 That achievement was his theory of gravity, the general theory of relativity, which he introduced in 1915. Two years later, in 1917, Einstein ran into a problem while trying to apply general relativity to the Universe as a whole. At the time, Einstein believed that on large scales the Universe is static and unchanging. No, really, pi is wrong: The Tau Manifesto by Michael Hartl. 40 technologies to watch in 2011. If the popular misreading of Mayan mythology is correct, we have fewer than two more years left on this Earth. 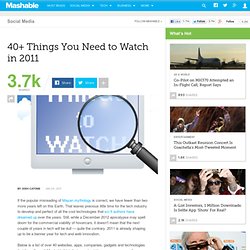 That leaves precious little time for the tech industry to develop and perfect of all the cool technologies that sci-fi authors have dreamed up over the years. Still, while a December 2012 apocalypse may spell doom for the commercial viability of hovercars, it doesn't mean that the next couple of years in tech will be dull — quite the contrary. 2011 is already shaping up to be a banner year for tech and web innovation. Below is a list of over 40 websites, apps, companies, gadgets and technologies that the editors of Mashable think that you should keep an eye on over the coming year.

MakeUseOf. /.. The Daily Galaxy - Great Discoveries Channel -Your Daily Dose of Awe: Science, Space, Tech. Massive Earth-like planets that have both continents and oceans may be better at harboring extraterrestrial life than those that are water-only worlds. 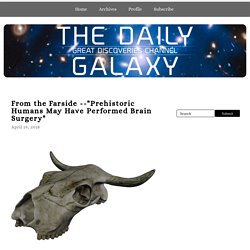 A new study gives hope for the possibility that many super-Earth planets orbiting distant stars have exposed continents rather than just water-covered surfaces. Wired.com.

Microscope photos. These microscope pictures are taken from the book ‘ Microcosmos’, created by Brandon Brill . 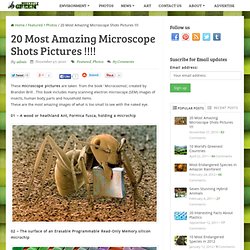