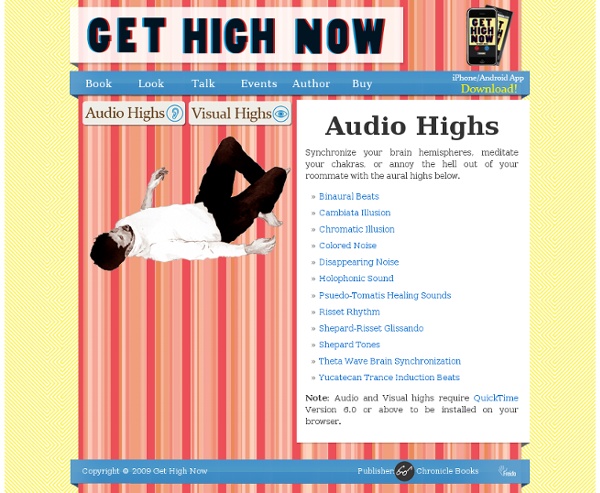 Top 10 Free Ways To Discover New Music Online Bored with your music and want to discover some new bands or singers? There are two main ways you can do that online. You can use services which create music maps, allowing you to explore artists similar in genre to the artists you already listen to. Or you can use music blogs and websites that showcase independent or up-and-coming artists, whether the music is being reviewed, or posted by the musicians themselves. Some of these websites have a community built around them, which gives fans the opportunity to interact directly with these new talents. Here is a list of 10 free sites to discover new music. Shepard-Risset Glissando What you’ll be hearing is a fluid audio loop that sounds as thought it is getting lower and lower—like a balloon slowly deflating but never becoming flat. How It Works If you’re anything like HighLab, you too were totally amazed by the Shepard Tone. For this reason, we’re going to hang out a bit with Shepard’s cohort, the famed French electric music composer Jean-Claude Risset, and have ourselves more mind-boggling good times listening to this related audio high, the Shepard-Risset Glissando. Come join us, won’t you?

50 Kick-Ass Websites You Need to Know About - Page 8 Obsoletethebook.tumblr.com Respect Your Gadget’s Ancestors This darling Tumblr blog preaches the kind of nostalgia that techies can really appreciate. Author Anna Jane Grossman recounts the simpler days of pay phones, Polaroid photos, and pocket calculators. If you’re ever suffering from shiny gadget overload, take a breath and calm yourself in the Obsolete blog’s welcoming analog arms. Wired.co.uk

Brief Answers to Cosmic Questions Structure of the Universe Does the Universe have an edge, beyond which there is nothing? Are the galaxies arranged on the surface of a sphere? Why can't we see the whole universe? Does the term "universe" refer to space, or to the matter in it, or to both? Evolution of the Universe Did the Universe expand from a point? If so, doesn't the universe have to have an edge? TIPPED OUT - thebeautydepartment.com all photos: Kristin Ess + thebeautydepartment.com post designed by kristin ess Lots of emails this week asking for a tutorial on Lauren’s temporary bright colors. Here I’ve replicated the process for you in 7 steps on an extension. While I never recommend bleaching out the ends of your hair at home, if you want to do the fun colors yourself, maybe get the tips bleached out by a pro + then play with the temporary colors on your own. The best things about this color– you’re able to hide it in a bun for work if you need to, AND you’re only doing a couple of inches on the bottom so it won’t kill you to cut it off if you get over it quickly. TOOLS: highlighting comb, clips, foils, color brush, hair bleach with the appropriate volume (always seek a professional when using bleach), light pink color, dark pink color, light blue, dark blue, clear gloss.

The Nerve Mixtape With Robert Schwartzman The former Rooney frontman and general Hollywood man about town gives us a romantic playlist for the ages. by Alex Heigl Robert Schwartzman is best known for being the frontman of uber-California band Rooney, and yes, Jason Schwartzman's brother. But he's also an accomplished actor and musician in his own right, and is currently promoting his second album, Double Capricorn, sales of which benefit the Tibetan Healing Fund. Pick up a copy, then enjoy this Spotify playlist of Robert's Mixtape. Tips, Tools and Techniques for Marketers Around the Globe Not too long ago, a friend of mine named Ken Robbins who runs Response Mine Interactive told me there are only three things people are interested in paying money for — Love, Weight Loss and Getting Rich. He was simplifying things a bit. After all, Ken’s company sells plenty of things that don’t have to do with love, weight loss or getting rich. But his point was a good one — that humans function in very basic, very instinctive ways. And if you, as a marketer, can tap into those instincts, you can make a lot of money.

My Photography Tutorials - 360 Degree Reverse Photography - Gallery In order to create a , you do not need to be an expert photographer or own expensive photography equipment. You just need to have a standard SLR camera, tripod and a 360-degree panorama software package and of course a good panorama to shoot. Follow these successfully achieving professional results in . First, pick a spot that is equidistant from every point in your photo. You should not have to zoom in and out. Since this will consists of a series of photos taken from one position as the camera is spun in a circle, a tripod is beneficial as it will give more consistent results. The Measurement of Science Albert Einstein’s greatest scientific “blunder” (his word) came as a sequel to his greatest scientific achievement. That achievement was his theory of gravity, the general theory of relativity, which he introduced in 1915. Two years later, in 1917, Einstein ran into a problem while trying to apply general relativity to the Universe as a whole. At the time, Einstein believed that on large scales the Universe is static and unchanging. But he realized that general relativity predicts that such a Universe can’t exist: it would spontaneously collapse in on itself. To solve this problem, Einstein modified the equations of general relativity, adding an extra term involving what is called the “cosmological constant” , which, roughly speaking, is a type of pressure which keeps a static Universe from collapsing.

Tips, Tools and Techniques for Marketers Around the Globe In Go Mobile, the book I’ve written with Jeanne Hopkins from HubSpot, we review a list of the 14 most powerful words in marketing so that readers can use them in their mobile marketing campaigns. This post gives you a sneak peak at the list that’s included in the book. Enjoy. Have you ever bought a product that you didn’t really need?