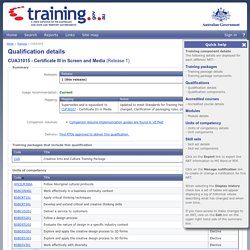 Kingscliff & Murwillumbah IT. Welcome to the course! 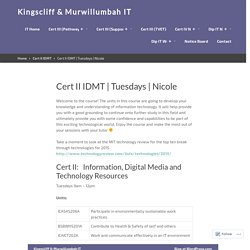 The units in this course are going to develop your knowledge and understanding of information technology. It will help provide you with a good grounding to continue onto further study in this field and ultimately provide you with some confidence and capabilities to be part of this exciting technological world. Enjoy the course and make the most out of your sessions with your tutor. Media Studies Teachers Online Resource Centre: Why The Golden Ratio Is Better Than The Rule Of Thirds. A long time ago I was a young art student, being told about the “Rule Of Thirds.” 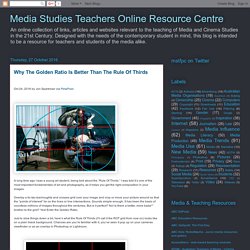 I was told it’s one of the most important fundamentals of art and photography, as it helps you get the right composition in your images. Overlay a tic-tac-toe/noughts and crosses grid over your image and crop or move your picture around so that the “points of interest” lie on the lines or line intersections. Leaving Facebook... A refereed journal addressing all aspects of cult media.

Create Infographics online. The Machine is Us/ing Us (Final Version) EDpuzzle. Legal Music For Videos. Many musicians choose to release their songs under Creative Commons licenses, which give you the legal right to do things like use their music in your videos. 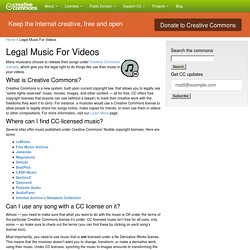 What is Creative Commons? Creative Commons is a new system, built upon current copyright law, that allows you to legally use “some rights reserved” music, movies, images, and other content — all for free. CC offers free copyright licenses that anyone can use (without a lawyer) to mark their creative work with the freedoms they want it to carry. For instance, a musician would use a Creative Commons license to allow people to legally share her songs online, make copies for friends, or even use them in videos or other compositions. For more information, visit our Learn More page. Where can I find CC-licensed music? Several sites offer music published under Creative Commons’ flexible copyright licenses. ACMA Media interests snapshot and maps package pdf. Media Watch: They're back: media reforms 2016 (01/02/2016) But now to more weighty matters and the latest episode in a long-running saga which never quite reaches the climax. 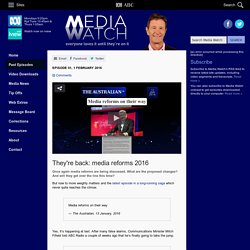 Media reforms on their way — The Australian, 13 January, 2016. 'Media Interests' snapshot. The Media Interests snapshot below provides an overview of the main interests in major commercial television and radio networks and associated newspapers. 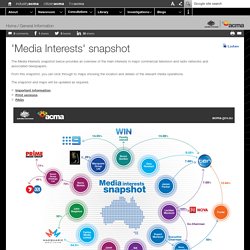 From this snapshot, you can click through to maps showing the location and details of the relevant media operations. The snapshot and maps will be updated as required. Important information: The Media Interests snapshot and associated maps (the infographics) are provided for indicative purposes only. They are not intended to be a comprehensive account of media interests in Australia. The Media Interests snapshot provides an overview only of the main interests in major commercial television and commercial radio networks and associated newspapers (as defined in the Broadcasting Services Act 1992). Research Resources. The Inspiration Room - Advertising creativity from around the world. Our Space: Being a Responsible Citizen of the Digital World.

For most young people today, engagement with new digital media is a routine aspect of life. 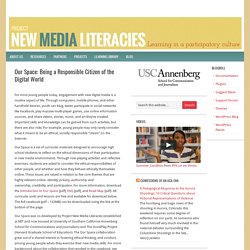 Through computers, mobile phones, and other handheld devices, youth can blog, tweet, participate in social networks like Facebook, play massive multi-player games, use online information sources, and share videos, stories, music, and art they’ve created. Important skills and knowledge can be gained from such activities, but there are also risks. For example, young people may only rarely consider what it means to be an ethical, socially responsible “citizen” on the Internet. Our Space is a set of curricular materials designed to encourage high school students to reflect on the ethical dimensions of their participation in new media environments. Why I REALLY am quitting social media. Fake iPhone iOS7 Text Messages. The Weekly Beast: ACA gets a lesson in journalism over 'cults' in schools story. A Channel Nine report about religion in schools which claimed instructors were using “hidden codes” to convert children to Christianity breached the accuracy provision of the TV code of practice, broadcasting authorities say. 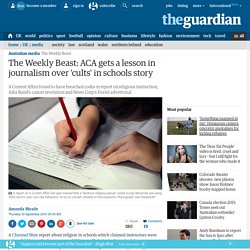 The report on A Current Affair last year said that a “fanatical religious group” called Access Ministries was using “dirty tactics” and “cult-like behaviour” to try to convert children in the classroom. One of the so-called secret codes was a puzzle which when completed by the kids said “Jesus is alive! He can be our friend today!” But the Australian Communications and Media Authority found that it was inaccurate to say that Access Ministries misled parents as to the nature of the religious instruction it provides because they were contracted by the Victorian education department to do just that.

“In fact, instruction in religious beliefs was what Access Ministries was both entitled and expected to do within the Victorian education system,” the report says. 14 ICONS OF CINEMA HAVE SOME ADVICE FOR YOUNG FILMMAKERS. I'm asked with some frequency what advice I have for young filmmakers, my reply (without hesitation) is for them to read Sydney Lumet's Making Movies followed by Rebel Without a Crew by Robert Rodriguez. 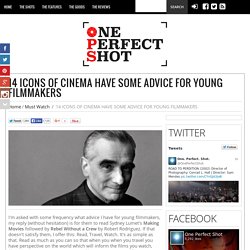 If that doesn't satisfy them, I offer this: Read, Travel, Watch. It's as simple as that. This striking diagram will change how you look at the world economy. How your phone tracks your every move. Updated Introduction As we move through the modern world many of our actions leave behind an electronic footprint; who collects that data and what they do with it have become critical questions for modern society. 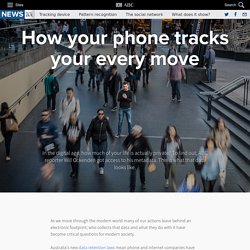 Australia's new data retention laws mean phone and internet companies have to save this information for two years: that's every time you call someone, where you call them from, which cell tower your phone pings every time it connects to the internet, and more. On a mission to find out what that data might reveal, ABC reporter Will Ockenden took a 'surveillance selfie': he got access to his own metadata, and now for the first time you can see what an individual Australian's metadata actually looks like. Tracking device. Introduction to Media - Resources - TES Australia. Adobe Stock - high quality royalty free stock photos and vectors. Documentaries, Watch Documentary Films Online. Deep-Dream-Australia-Final. Mashable sur Twitter : "Old BBC memo on NSFW policies in the '40s: no references to animal habits or ladies' underwear.

The Murdoch Papers Are Comparing The ABC To ISIS On Their Front Pages Today, Because Journalism. By Alex McKinnon, 24/6/2015 Yesterday Zaky Mallah’s controversial appearance on Q&A prompted the kind of chronic overreaction we’ve come to expect from the government; Liberal backbencher Alex Hawke accused the ABC of “sedition,” while Tony Abbott asked the broadcaster: “whose side are you on?”

Taking their cue, every hack Murdoch editor in the land duly cranked out a front page this morning literally equating Australia’s national public broadcaster to a terrorist cell that throws gay people off buildings and beheads hostages on film. The Courier-Mail, which has form in the disgusting-headline department, magically managed to come up with the exact same idea as their cousins down south in Melbourne.

And lo and behold, Sydney’s favourite kitty-litter liner jumped on the bandwagon too. 40 maps that explain the internet. The internet increasingly pervades our lives, delivering information to us no matter where we are. It takes a complex system of cables, servers, towers, and other infrastructure, developed over decades, to allow us to stay in touch with our friends and family so effortlessly. Here are 40 maps that will help you better understand the internet — where it came from, how it works, and how it's used by people around the world.

How the internet was created Before the internet, there was the ARPANET Before the internet, there was the ARPANETARPANET, the precursor to the modern internet, was an academic research project funded by the Advanced Research Projects Agency, a branch of the military known for funding ambitious research projects without immediate commercial or military applications. Initially, the network only connected the University of Utah with three research centers in California. The internet around the world Threats to the internet. Anti-pirating ad music stolen › Dr Karl's Great Moments In Science (ABC Science)

Dr Karl › Dr Karl's Great Moments In Science You wouldn't steal a movie, so why would you put stolen music on an anti-piracy ad? Dr Karl investigates a curious case of copyright theft. By Karl S. Kruszelnicki If you have bought or rented a movie on a DVD sometime in the last few years, you would have had to sit through the compulsory anti-piracy video at the beginning. Music pirate Jammie Thomas-Rasset fined $2.4m. Jammie Thomas-Rasset pictured in 2007. A US jury has ordered a 32-year-old woman to pay $US1.92 million ($2.4 million) in damages for illegally downloading 24 songs in a high-profile digital piracy case. Jammie Thomas-Rasset, a single mother of four from the US state of Minnesota, was found liable for using the Kazaa peer-to-peer file-sharing network to download the songs over the internet.

Meeting the challenge of convergent media policy. AFP talks “The Art of Asking” at TED 2013 The official website of Amanda Fucking Palmer. Yes it is. 40 MORE Of The Worst Rob Liefeld Drawings. - Progressive Boink. Characters. Www.dbcde.gov.au/__data/assets/pdf_file/0006/146994/Report-of-the-Independent-Inquiry-into-the-Media-and-Media-Regulation-web.pdf. Media giants divided over law reform plan - Business. Why Murdoch’s media is gunning for your NBN. Game of Thrones: Another case for piracy – Blog – ABC Technology and Games. Shareholders move against Murdoch – TruthInNewsMedia. Digital Australians–Expectations about media content in a converging media environment.