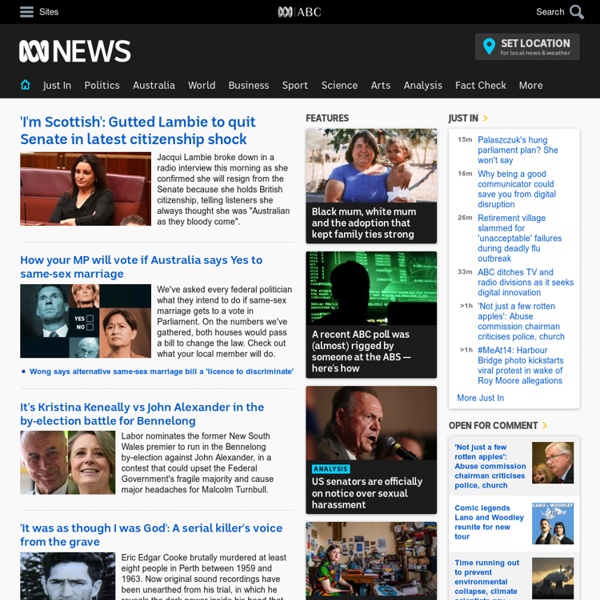 'I'm Scottish': Gutted Lambie to quit Senate in latest citizenship shock Jacqui Lambie broke down in a radio interview this morning as she confirmed she will resign from the Senate because she holds British citizenship, telling listeners she always thought she was "Australian as they bloody come". How your MP will vote if Australia says Yes to same-sex marriage We've asked every federal politician what they intend to do if same-sex marriage gets to a vote in Parliament. On the numbers we've gathered, both houses would pass a bill to change the law. Check out what your local member will do. Wong says alternative same-sex marriage bill a 'licence to discriminate' It's Kristina Keneally vs John Alexander in the by-election battle for Bennelong Labor nominates the former New South Wales premier to run in the Bennelong by-election against John Alexander, in a contest that could upset the Federal Government's fragile majority and cause major headaches for Malcolm Turnbull.

Seen At 11: Real Life ‘Superheroes’ Take Matters Into Their Own Hands Donning Homemade Protective Gear, Costumes They Work To Protect Gotham May 9, 2013 11:40 PM From our newsroom to your inbox weekday mornings at 9AM. Sign Up NewStatesman - Russell Brand on revolution IIn the summer of 1970, a 34-year-old Welsh artist with a shock of prematurely white hair and a thick, moustache-less goatee was asked by the Times to draw political cartoons during the general election campaign. Idealistic and mistrustful of authority, Ralph Steadman saw little that was likeable or even distinguishable in the Conservative Party’s Edward Heath and Labour’s Harold Wilson. But he had four children to support from a recently ended marriage and needed a steady income, so he accepted the assignment – and got on with causing offence. Steadman’s first cartoon for the newspaper, featuring the diminutive Mr Weath and Mr Hilson, as he named them, along with the Liberal Party leader, Jeremy Thorpe, was titled Happiness Is a Small Politician.

Prenatal screening advances with non-invasive blood test now available in Australia Updated New, cutting-edge prenatal screening technology is about to become available in Australia for the first time, with a non-invasive blood test allowing expecting parents to screen for chromosomal disorders like Down syndrome. The new, non-invasive blood test has only been available for two years, and up until now only via American companies at a substantial cost. But the test is about to be offered by Victorian Clinical Genetic Services, a not-for-profit provider of genetic testing, based at the Murdoch Children's Research Institute in Melbourne. Medical director David Amor said there were good reasons to offer the test in Australia.

Topix - Australia News 1 hr ago | The Age The making of an unlikely radical Hated by progressives for his role in Gough Whitlam's dismissal and his ultra-conservative foreign policies when Liberal PM, Malcolm Fraser today believes Australia should cut all military ties to the US. Trending on the Topix Network 10 Emerging Ethical Dilemmas in Science and Technology The John J. Reilly Center for Science, Technology, and Values at the University of Notre Dame has released its annual list of emerging ethical dilemmas and policy issues in science and technology for 2015. This marks the third year the Center has released a list. The Reilly Center explores conceptual, ethical, and policy issues where science and technology intersect with society from different disciplinary perspectives. Its goal is to promote the advancement of science and technology for the common good.

Jake Austin converted truck into mobile shower to offer homeless safe place to wash When people want to help the homeless in their area, they tend to think of the immediate needs: food, warm clothes and toiletries. But, when you actually stop to think about it, what good are new clothes and deodorant when you haven’t been able to wash properly in months? Think how nice it is to step into a long, hot shower after a tough day and imagine what it would be like never, or rarely, having access to private, safe washing facilities. That is the thinking behind Shower to the People’s Mobile Shower Unit. ‘People can get food and clothes, but if they haven’t had a shower in three months, they can’t get a job even flipping burgers,’ says Jake Austin, a 31-year-old pastor from St.

Australian Debt Clock Blog Post 12| 27th December 2015 U.S. Federal Reserve Breaks Bad In the wind up of 2015 the Federal Reserve (FED, U.S. Central Bank) has made a counter logical (logical, in terms of their theoretical mandate) decision to increase interest rates, effectively reducing the amount of liquidity that will be available into 2016. On 17th December 2015 the FED made the decision to raise he Federal Funds Rate from a range of 0-0.25% to 0.25-0.5%, the first increase since 16th December 2008 in light of the Global Financial Crisis (GFC).

Science debate: Should we embrace an enhanced future? Image copyright Science Photo Library To write this article, I drank a beverage containing an effective cognitive enhancer - something that helps me - almost daily - to focus. In my pocket, I carry an extension of my memory, on which I made notes for this very story.

great site for podcasts and written text of current events. by tangchannam Aug 23