Stupas. Symbols of Enlightenment Stupas are sacred monuments that embody the enlightened mind. 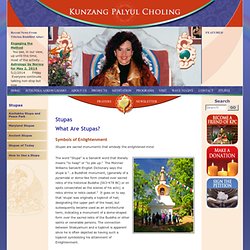 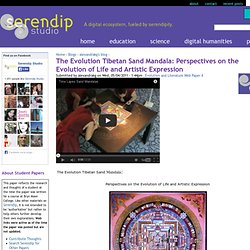 We began with Darwin, and slowly worked our way further and further into stories. We asked ourselves, what is truth? What is life and death? The Sand Mandala is practiced by Tibetan Buddhist monks.

She-rab Dong-bu (The Tree of Wisdom) by Nagarjuna. Vajrasattva Mantra - 100 Syllable Vajrasattva mantra and short Vajrasattva mantra. Va jra sa ttva Vajrasattva is pure white in colour and is sometimes known as the Prince of Purity. His name means "Adamantine Being", or more poetically "Embodying Reality". Tibet. Self-immolations by Tibetans - International Campaign for Tibet. Last Updated: April 16, 2014, 14:47 EST This list provides summary details of the self-immolations by Tibetans in the PRC since February, 2009 (all except one, by a Tibetan woman in Beijing, have taken place in Tibet). 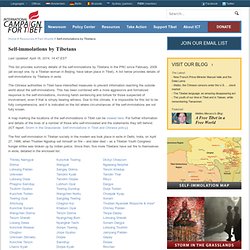 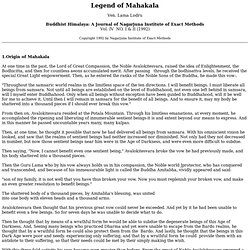 Lama Lodru. Tibetan Yoga meditation methods revealed - General Discussion. Earlier I made a thread about Tibetan Monks abilities to use meditation to generate heat in their bodies, to melt snow around them, or to dry freezing wet sheets wrapped around their body until the sheets start steaming and become totally dry. 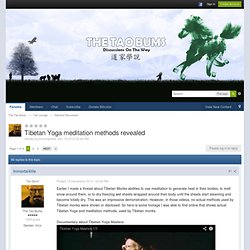 This was an impressive demonstration. However, in those videos, no actual methods used by Tibetan monks were shown or disclosed. So here is some footage I was able to find online that shows actual Tibetan Yoga and meditation methods, used by Tibetan monks. Documentary about Tibetan Yoga Masters- Buddhism. Buddhism. A Buddhist Reading List (460 books) Buddhism For Non-Believers.

I’ve got that quarter-life crisis swag going on. 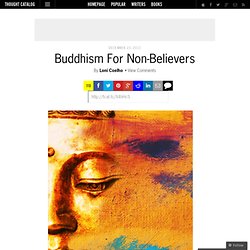 I have yet to be very productive during my post-graduation time. I watch as my friends get bonuses at their jobs, read their tweets about how difficult grad school is, and be astonished that I don’t know one but multiple peers working for Teach For America. Yes, I did get to fulfill my stereotypical wanderlust moment by traveling through SE Asia for six weeks. Yes, I did get some form of an internship for a while. And yes, I did move to New York.

During those dark times I turn to a rather unlikely figure since I lack any sense of spirituality: Alan Watts. 10 Misconceptions about Buddhism. Buddhist Beliefs Explained. Sangha is the word for the community of Buddhists; those people seeking enlightenment by practicing the Dharma. 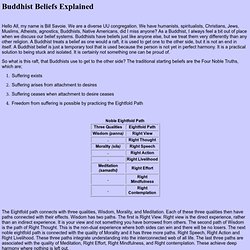 Buddha said that the only way to realize the Dharma was in community, so the Sangha is an important part of this process. So Buddhists take refuge by a respectful repeating of this word “Sangha”. Dhammapada, wrote sometime between 188-192 They go to many a refuge,to mountains, forests, parks, trees, and shrines:people threatened with danger.That's not the secure refuge,that's not the highest refuge,that's not the refuge, having gone to which, you gain release from all suffering and stress. Buddhism and Buddhist schools. Spiritual Boot Camp – Ten Days in Silent Meditation. An intensive Vipassana meditation retreat promises to help you “see things as they really are.” But will it be worth ten days of torture? The premise of Buddhism in simple English. NKT - Glossary of Buddhist Terms. © Geshe Kelsang Gyatso and Tharpa Publications This Master Glossary is provisional. 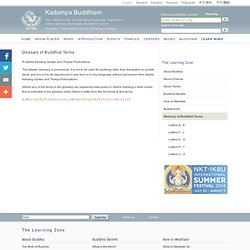 It is not to be used for anything other than translation or private study, and it is not to be reproduced in any form or in any language without permission from Geshe Kelsang Gyatso and Tharpa Publications. Where any of the terms in the glossary are explained extensively in Geshe Kelsang’s other books, this is indicated in the glossary entry. Select a letter from the list below to find terms. 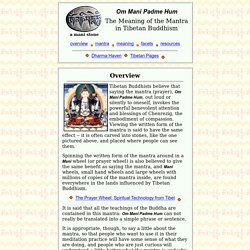 Here are a few of them: The Transformation of Speech [An excerpt from The Dharma, by Kalu Rinpoche, from a chapter on The Four Dharmas of Gampopa. ] Auspicious Symbols of Buddhism Buddhist Symbology Eastern Spirituality Faith. Buddhism and the Brain. Credit: Flickr user eschipul Over the last few decades many Buddhists and quite a few neuroscientists have examined Buddhism and neuroscience, with both groups reporting overlap. 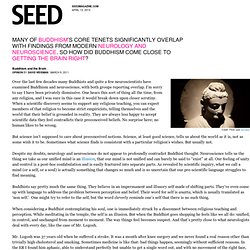 I’m sorry to say I have been privately dismissive. One hears this sort of thing all the time, from any religion, and I was sure in this case it would break down upon closer scrutiny. When a scientific discovery seems to support any religious teaching, you can expect members of that religion to become strict empiricists, telling themselves and the world that their belief is grounded in reality. They are always less happy to accept scientific data they feel contradicts their preconceived beliefs. But science isn’t supposed to care about preconceived notions. Despite my doubts, neurology and neuroscience do not appear to profoundly contradict Buddhist thought. Buddhists say pretty much the same thing. Mr. Although I despaired, I comforted myself by looking at the overlying cortex. The next day Mr. Buddha's Wheel of Life. Guided Meditation Audio - Listen for free.

Listen for free New audio meditations created by Elisabeth are regularly added to this page. Don't miss when they come out - Subscribe to the FragrantHeart.com Newsletter We have meditations available in the following categories: Meditation Courses Meditations for Relaxation & Stress Relief. Lojong. Lojong (Tib. བློ་སྦྱོང་,Wylie: blo sbyong) is a mind training practice in the Tibetan Buddhist tradition based on a set of aphorisms formulated in Tibet in the 12th century by Geshe Chekhawa. The practice involves refining and purifying one's motivations and attitudes. KALI AND BUDDHISM - FreeSangha - Buddhist Forum. Some more information: Hindu Kali & The Lion Symbol Site Map 金剛獅子吼拳法 www.lionsroar.name The Lion Symbol in Tibetan Martial Arts.