Plastic Pollution in our Oceans 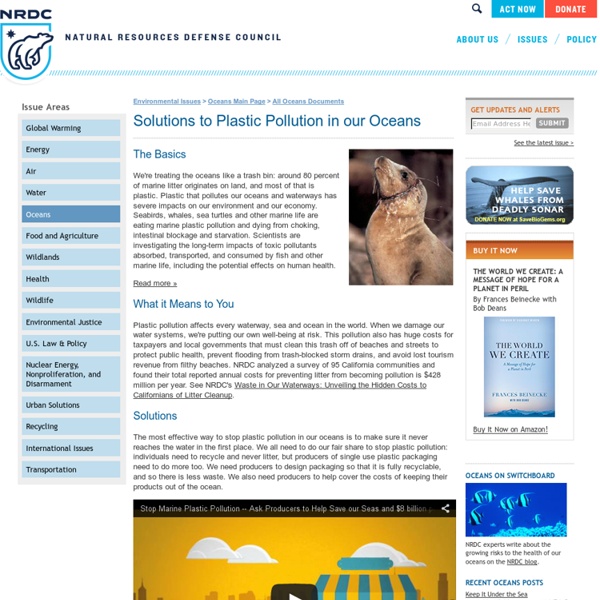 Environmental Issues > Oceans Main Page > All Oceans Documents The Basics We're treating the oceans like a trash bin: around 80 percent of marine litter originates on land, and most of that is plastic. Read more » What it Means to You Plastic pollution affects every waterway, sea and ocean in the world. Solutions The most effective way to stop plastic pollution in our oceans is to make sure it never reaches the water in the first place. NRDC is working on three key strategies to curb plastic water pollution in the U.S. and beyond: 1. NRDC is building a growing coalition of waste management, community, environmental, and business groups support measures that would stop plastic pollution at its source by creating incentives for industry to use less packaging for their products, make them recyclable, and ensure that recycling actually happens. 2. 3. What You Can Do Marine plastic pollution shows us that we cannot really throw anything "away." 1. 2. 3. 4. 5. last revised 3/8/2014 Related:  Environment

Artists & Products Plastic Oceans | Facts | Waste | Plastic Oceans The proliferation of plastic products in the last 70 years or so has been extraordinary; quite simply we cannot now live without them. This epidemic of plastic has resulted in an increased introduction from around 50 million tonnes in 1950 to 245 million tonnes in 2008 (Plastics Europe). Plastic is cheap and incredibly versatile with properties that make it ideal for many applications. However, these qualities have also resulted in it becoming an environmental issue. According to water filtration company Brita, Americans throw away 35 billion plastic water bottles every year.Packaging is the largest end use market segment accounting for just over 40|% of total plastic usage (Plastics Europe)Annually approximately 500 billion plastic bags are used worldwide.

The Recycling Reflex Fixes looks at solutions to social problems and why they work. What if there were something that could create 1.5 million new jobs, reduce carbon emissions equal to taking 50 million cars off the road, cut dependence on foreign oil, increase exports, save water, improve air quality and reduce toxic waste? What if it were low-cost and readily implemented? Wouldn’t everyone do it? At a time of wildfires, droughts and persistent unemployment, wouldn’t it be a centerpiece of the presidential campaign? A drive to make the act of recycling as automatic as stopping at a red light. Well, there is such a thing. The numbers in the first paragraph come from a report prepared by the Tellus Institute for the Natural Resources Defense Council and other groups entitled “More Jobs, Less Pollution” that estimates the impact of raising the country’s recycling rate to 75 percent. Moreover, recycling is great for a struggling economy because it is labor intensive. So why don’t people recycle more?

Why Recycle? The Response » THE CLEAN OCEANS PROJECT Our Organization The Clean Oceans Project (TCOP) is a 501c3 non-profit created to develop efficient and effective methods of eliminating plastic from the ocean. Our Plan TCOP’s multi-phase approach involves research, education and direct action integrated into a cohesive long-term plan. Training shoreline surveyors creates local awareness and promotes ocean stewardship. To measure progress we monitor plastic debris deposition rates at isolated shore stations which is far more accurate than oceanic sampling. Disposal TCOP will utilize plastic-to-fuel conversion systems on board collection vessels to transform plastic into diesel fuel eliminating the need to dispose of the waste in a landfill and providing fuel for collection operations. Long Term Commitments TCOP is committed to a comprehensive global approach to plastic pollution. We are committed to research and technical innovation to facilitate an accurate awareness of plastics pollution. Support and Funding Our Message

Almost all world’s oceans damaged by human impact, study finds | Environment Just 13% of the world’s oceans remain untouched by the damaging impacts of humanity, the first systematic analysis has revealed. Outside the remotest areas of the Pacific and the poles, virtually no ocean is left harbouring naturally high levels of marine wildlife. Huge fishing fleets, global shipping and pollution running off the land are combining with climate change to degrade the oceans, the researchers found. Furthermore, just 5% of the remaining ocean wilderness is within existing marine protection areas. “We were astonished by just how little marine wilderness remains,” says Kendall Jones, at the University of Queensland, Australia, and the Wildlife Conservation Society, who led the new research. Jones said the last remnants of wilderness show how vibrant ocean life was before human activity came to dominate the planet. Much of the wilderness is in the high seas, beyond the protected areas that nations can create. As most are on the high seas, very few are protected.

Local Recycling Home microplastics - rivers & lakes too click 2x When you think of microplastic pollution, plastic debris less than five millimetres in size, you likely envision the ocean — probably because ocean gyres gained notoriety for being a microplastic soup. But what about our lakes, rivers, forests and fields? They can be just as contaminated with microplastic debris as the oceans. Until recently, these environments were described as conduits — ways for plastics to get to the oceans. We now know that agricultural land, surface waters, freshwater lakes and river sediments are also contaminated. In the past five years, researchers have started to study the sources, fates and effects of microplastics in freshwater and terrestrial ecosystems, but only a handful of studies have been done so far. Microplastics in our Great Lakes Here in North America, when we think of freshwater, we often think of the Laurentian Great Lakes. For the Indigenous peoples of Canada, the Great Lakes hold even more importance. Contaminated habitats, contaminated wildlife

Department of Public Service, Columbus, Ohio Snow and Ice Plan Quick facts about Columbus' Snow and Ice Plan and Related Snow Information - learn more Parking The Mobility Options Division and Parking Violations Bureau manage parking in the City to ensure reasonable access and turnover for residents and visitors. - learn more Refuse Collection Trash collection for the City of Columbus is managed by the Department of Public Service, Division of Refuse Collection. The City collects trash from more than 320,000 households using trucks with mechanical arms to pickup and empty collection containers. - learn more Recycling Recycling and Columbus really do belong together. Bicycling Welcome to the Bikeway Program for the City of Columbus. India just banned all forms of disposable plastic in its capital | The Independent India’s capital city Delhi has introduced a ban on disposable plastic. Cutlery, bags, cups and other forms of single-use plastic were prohibited by the National Green Tribunal (NGT). There is particular concern in the country about the amount of plastic waste it produces. According to the Times of India, it is responsible for an astonishing 60 per cent of the plastic that is dumped in the world’s oceans every year. The ban affects the whole National Capital Territory (NCT) area of Delhi. It was introduced after complaints about the illegal mass burning of plastic and other waste at three local rubbish dumps, which has been blamed for causing air pollution. The Tribunal said in a statement: “Each of these sites is a depiction of the mess that can be created for environment and health of people of Delhi. “We direct that use of disposable plastic is prohibited in entire NCT of Delhi. “The Delhi government shall take steps for storage and use of plastic materials.” Reuse content

Our Debris Filling the Sea | Ocean Today What do a tropical island in the Pacific Ocean and the Antarctic have in common? Unfortunately, it’s marine debris. Even the most remote locations on Earth are fouled by man-made garbage and cast-outs. And a majority of the debris that’s found comes from land-based sources. In one marine protected area off the Northwestern Hawaiian Islands, in just one month, 50 metric tons of debris was collected. That’s equivalent to 50 elephants worth of trash. And no matter what location it resides, it causes problems. There are no easy solutions to the worldwide problem of marine debris, but there are things you can do to help. We can recycle more, volunteer to clean up coastlines, and give support to programs that are tackling the issue in creative ways. Ultimately, the most effective way to reduce our waste is to not create it in the first place.

Recycled Art: 66 Masterpieces Made From Junks Ever shocked by the beauty of toilet paper rolls, or saw the chicken formed by the egg shells, or witnessed coolest lion made by tires? Heck, all of them are even made by common things you discarded every day, and they are known as recycled art. (Image Source: Kyle Bean) Recycled art is not something that’s beautiful but just a waste of time and space. Are they really that beautiful and worth the purchase? Atelier Hapax Workshop Hapax excels in creating gorgeous and unique products by using discarded materials provided by their clients. Jeu Dechecs. BRC Designs ‘BRC’ stands for Benjamin Rollins Caldwell, founder of the BRC Designs who reforms timeless and unconventional materials into simple yet unique furniture which design surpasses most expensive furniture. Binary Low Table. Korobeiniki Chair. Protrusion Low Table. Andrew Chase Andrew Chase by the Chase studio is a photographer and one of the few artists who has the talent to form an epic dinosaur with mere metals. Dinosaur. Elephant.