What is the role of climate change in the conflict in Syria? Human adaptation: Manage climate-induced resettlement. Reuters Flood victims wait to be airlifted from a home near the mouth of the Limpopo River in Mozambique last year. 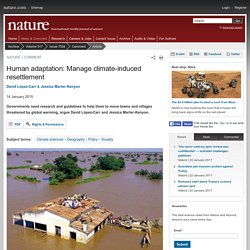 Inupiaq people are watching in horror as climate change claims their homes. Having endured repeated flooding and erosion from sea-ice melting and permafrost thaw, the 400 residents of Kivalina, an Alaskan village on a low barrier island in the Chukchi Sea, voted in 1998 and in 2000 to relocate — together — to coastal sites on higher ground.

More than a decade and a half later, Kivalina remains in limbo, its move stymied by institutional, financial and physical barriers1. No US federal or state agency has a mandate to undertake such mass resettlement, even though the government spent more than US$15 million on erosion control between 2006 and 2009. Papua New Guinea, China and Vietnam have already relocated communities that were vulnerable to flooding2. The Atlas of Environmental Migration (Paperback) Video lecture: the crisis in Syria and role of climate changeClimate & Migration Coalition. Under a Changing Sky. International Organization for Migration. The International Organization for Migration (IOM), as the leading intergovernmental migration agency, has been at the forefront of operational, research, policy and advocacy efforts, seeking to bring environmental migration to the heart of international, regional and national concerns in collaboration with its Member States, observers and partners. 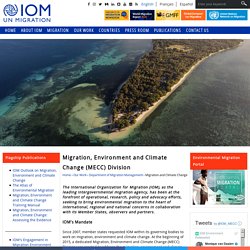 IOM’s Mandate Since 2007, member states requested IOM within its governing bodies to work on migration, environment and climate change. At the beginning of 2015, a dedicated Migration, Environment and Climate Change (MECC) Division was created to address the migration, environment and climate nexus. This institutional change has formalized IOM’s engagement in this thematic area, making IOM the first international organization to have established an institutional unit fully devoted to this topic. IOM’s Vision. Knowledge Platform on People on the Move in a Changing Climate. Climate Change, Disasters and Refugees - Talking Points. Do Climate Change 'Refugees' Exist? - Prof. Jane McAdam. Fotografie - příběhy migrujících. A WALL IN BETWEEN: MEXICO – U.S.The United Nations estimate that every year more than 3 million people attempt to immigrate illegally into the United States through its southern border. 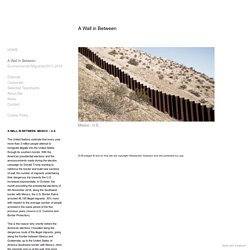 With the American presidential elections and the announcements made during the election campaign by Donald Trump wanting to reinforce the border and build new sections of wall, the number of migrants undertaking their dangerous trip towards the U.S. increased exponentially. In October, the month preceding the presidential elections of 4th November 2016, along the Southwest border with Mexico, the U.S. Climate changes migration HD.mov. 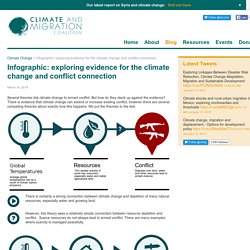 But how do they stack up against the evidence? There is evidence that climate change can extend or increase existing conflict, however there are several competing theories about exactly how this happens. We put the theories to the test. There is certainly a strong connection between climate change and depletion of many natural resources, especially water and growing land. However, this theory sees a relatively simple connection between resource depletion and conflict. There is good evidence that disasters can lead to migration and displacement. However there is little evidence that migrants create tensions in their new locations, or that new arrivals compete with existing communities over resources. There is evidence linking climate change, disasters and displacement. Vlad Sokhin. The World's First Climate Refugees.

5 Things You Should Know About Climate Refugees. The Earth’s climate is changing at a rate that has exceeded most scientific forecasts. 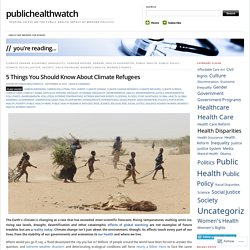 Rising temperatures, melting arctic ice, rising sea levels, drought, desertification and other catastrophic effects of global warming are not examples of future troubles but are a reality today. Climate change isn’t just about the environment, though; its effects touch every part of our lives, from the stability of our governments and economies to our health and where we live. Climate Migrants - Rebecca E. Hirsch Children's Author. International Organization for Migration. Immigrants in their own words: 100 stories. USA suffers severe climate induced migration. By John Parnell Over 30 million people lost their homes due to weather and climate induced disasters in 2012, with the USA surprisingly suffering more than Bangladesh. 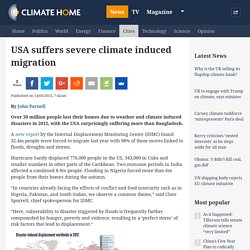 A new report by the Internal Displacement Monitoring Centre (IDMC) found 32.4m people were forced to migrate last year with 98% of those moves linked to floods, droughts and storms. In Somaliland, climate change is now a life-or-death challenge. If you drive north from the Somaliland village of Gargara – where women speak of their heartache at losing goats in this year’s drought – and ford the fractured beds of dry rivers, passing the sun-bleached bones of dead animals, you eventually arrive in Lughaya, where open-mouthed fish lie on the white sands by the Red Sea after a wave “like a mountain” smashed into the coast this month. 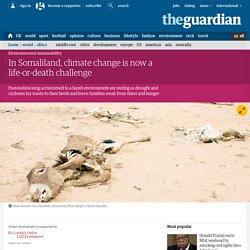 This is what a changing climate looks like. Somaliland, which broke away from Somalia in 1991 but is not recognised internationally, could be considered the canary in the mine of a world that is getting hotter, and where extreme weather is becoming more common. Which countries are most vulnerable to climate change? Somalia is the country most vulnerable to the impact of climate change, according to Notre Dame University’s Global Adaptation Index. 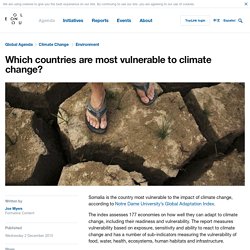 The index assesses 177 economies on how well they can adapt to climate change, including their readiness and vulnerability. The report measures vulnerability based on exposure, sensitivity and ability to react to climate change and has a number of sub-indicators measuring the vulnerability of food, water, health, ecosystems, human habitats and infrastructure. The following table shows those nations most vulnerable, based on the 2014 Index. So what is it that makes these countries so vulnerable? Climate and the Calais refugee "crisis". Climate & Migration.Climate & Migration Coalition. Are any of the refugees attempting to cross the channel from France to the UK fleeing climate change? 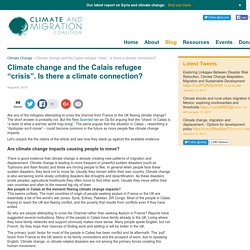 The short answer is probably not. Climate change and Syrian refugees in the MedClimate & Migration Coalition. This article was first published in Responding to Climate Change. 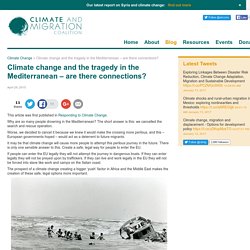 Why are so many people drowning in the Mediterranean? The short answer is this: we cancelled the search and rescue operation. Worse, we decided to cancel it because we knew it would make the crossing more perilous, and this – European governments hoped – would act as a deterrent to future migrants. It may be that climate change will cause more people to attempt this perilous journey in the future. There is only one sensible answer to this. Climate & Migration: connecting climate change and migrationClimate & Migration Coalition. Syria and climate change: did the media get it right? During 2015 the media started connecting climate change with the conflict in Syria and subsequent refugee movements across Europe.

Many reports were in direct response to new research making this connection. Other reports mentioned this research while examining other major events such as the drownings in the Mediterranean, the refugee camp in Calais and the terrorist attacks in November 2015. But did those media reports accurately represent the research they referenced? Play introduction Some elements of media reporting accurately represented the research, especially when coverage focused specifically on events leading up to the Syrian uprising in 2011. Drought response faces funding shortfall. With a few weeks left before the end of this year’s planting season, UN officials have raised concerns over the lack of funds to help drought-hit farmers and herders in northeastern Syria. “The situation is worrying. We have six weeks left before we miss this planting season,” said Abdulla Bin Yehia, UN Food and Agriculture Organization (FAO) representative in Syria. Drought Called a Factor in Syria’s Uprising.

Two-and-a-half years ago, a group of children in the Syrian city of Dara’a triggered one of the bloodiest conflicts in the 21st century when they painted some anti-government graffiti on a school wall in the ancient farming community. The children were quickly detained and tortured, leading to widespread protests in the city that were met with harsh repression. The government’s brutal response led to a nationwide revolt that has now stagnated into a bloody stalemate with no end in sight. Climate Change and the Syrian Civil War (ECC Factbook Conflict Analysis) Climate change implicated in current Syrian conflict. Khaled al-Hariri/Reuters/Corbis A historic drought that began in 2007 helped to drive roughly 1.5 million Syrians from rural areas to cities. The drought that ravaged Syria from 2007 to 2010 was the worst in that nation’s recorded history, devastating agriculture in the region. Roughly 1.5 million people fled rural areas for urban outskirts where, in March 2011, social unrest boiled over into civil uprising.