The Brothers Koch quietly become largest tar-sands lease holders in Alberta (UPDATED) UPDATE: It looks like Steve Mufson and Juliet Eilperin, the authors of the Washington Post article upon which this post was based, are backing down on their claims — sort of. 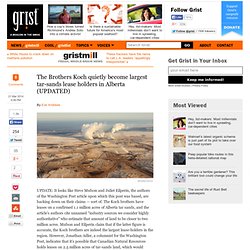 The Koch brothers have leases on a confirmed 1.1 million acres of Alberta tar sands, and the article’s authors cite unnamed “industry sources we consider highly authoritative” who estimate that amount of land to be closer to two million acres. Mufson and Eilperin claim that if the latter figure is accurate, the Koch brothers are indeed the largest lease-holders in the region. However, Jonathan Adler, a columnist for the Washington Post, indicates that it’s possible that Canadian Natural Resources holds leases on 2.5 million acres of tar-sands land, which would exceed even the Kochs’ theoretical holdings. You can read Mufson and Eilperin’s fairly half-hearted mea culpa here, and Adler’s response to the original article here.

Charles and David Koch sure are a busy coupla pranksters! Tar-sands industry loses $17.1 billion thanks to public opposition. The Keystone XL pipeline alternative you’ve never heard of is probably going to be built. Last week, the controversial Keystone XL pipeline, which would transport oil from the Alberta tar sands to the Gulf of Mexico, hit another snag: The State Department’s Office of the Inspector General said that it is investigating a possible conflict-of-interest issue in the project’s environmental impact study. 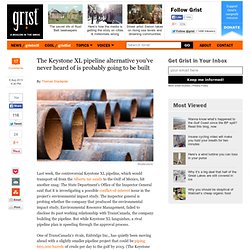 The inspector general is probing whether the company that produced the environmental impact study, Environmental Resource Management, failed to disclose its past working relationship with TransCanada, the company building the pipeline. But while Keystone XL languishes, a rival pipeline plan is speeding through the approval process. One of TransCanada’s rivals, Enbridge Inc., has quietly been moving ahead with a slightly smaller pipeline project that could be piping 660,000 barrels of crude per day to the gulf by 2015.

Huge tar-sands waste pile grows alongside Detroit River. A riverside refinery that has operated in Detroit since the 1930s began refining a new type of oil in November: tar-sands oil from Canada. 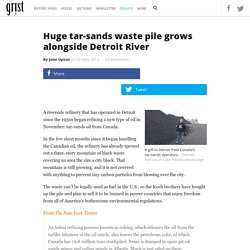 In the few short months since it began handling the Canadian oil, the refinery has already spewed out a three-story mountain of black waste covering an area the size a city block. That mountain is still growing, and it is not covered with anything to prevent tiny carbon particles from blowing over the city. The waste can’t be legally used as fuel in the U.S., so the Koch brothers have bought up the pile and plan to sell it to be burned in poorer countries that enjoy freedom from all of America’s bothersome environmental regulations. Piles of tar-sands waste in Chicago are pissing people off. Clouds of coal dust and petroleum coke, a waste product from the refining of tar-sands oil, have been enveloping neighborhoods on Chicago’s southeast side. 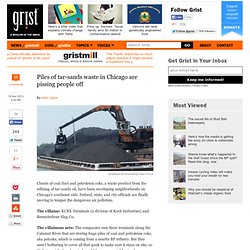 Federal, state, and city officials are finally moving to temper the dangerous air pollution. The villains: KCBX Terminals (a division of Koch Industries) and Beemsterboer Slag Co. The villainous acts: The companies own three terminals along the Calamut River that are storing huge piles of coal and petroleum coke, aka petcoke, which is coming from a nearby BP refinery.

But they aren’t bothering to cover all that gunk to make sure it stays on site, so it’s being picked up by winds and blown over neighboring homes, forcing residents to stay indoors. 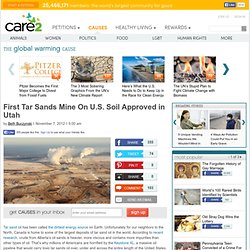 Unfortunately for our neighbors to the North, Canada is home to some of the largest deposits of tar sand oil in the world. According to recent research, crude from Alberta’s oil sands is heavier, more viscous and contains more impurities than other types of oil. That’s why millions of Americans are horrified by the Keystone XL, a massive oil pipeline that would carry toxic tar sands oil over, under and across the entire length of the United States.

Until recently tar sands oil was a Canadian debacle, and U.S. activists have been fighting to keep it in Canada. September 29, 2013 - Stop Tar Sands Ecocide, Block Canada's Energy East Pipeline. Additional Background The Canadian government and TransCanada Corp. are actively promoting plans for the “Energy East” pipeline that would carry up to 850,000 barrels of crude per day, including tar sands, from Alberta to Eastern markets. 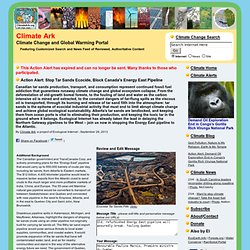 The $12 billion, 4,400 kilometer pipeline would lead to massive tanker exports from the Atlantic coast to send crude to the much larger and more profitable markets of India, China, and Europe. The 55-year-old Mainline natural gas pipeline would be converted to transport oil between Saskatchewan and Quebec and connected with new pipeline in the west to Empress, Alberta, and in the east to Quebec City and Saint John, New Brunswick. 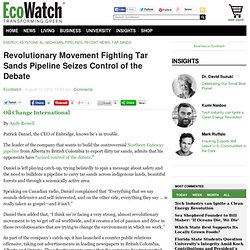 The leader of the company that wants to build the controversial Northern Gateway pipeline from Alberta to British Colombia to export dirty tar sands, admits that his opponents have “seized control of the debate.” Daniel is left playing catch-up, trying belatedly to spin a message about safety and the need to bulldoze a pipeline to carry tar sands across indigenous lands, beautiful forests and through a seismically active area. Speaking on Canadian radio, Daniel complained that “Everything that we say sounds defensive and self-interested, and on the other side, everything they say … is really taken as gospel—and it isn’t.” Daniel then added that, “I think we’re facing a very strong, almost revolutionary movement to try to get off oil worldwide, and it creates a lot of passion and drive in those revolutionaries that are trying to change the environment in which we work.”

Defend Tar Sands Blockade Protesters! Right now, 9 protesters from the Tar Sands Blockade are sitting in the trees of Winnsboro, East Texas, where they have stopped construction on the Southern leg of Keystone XL for days running. 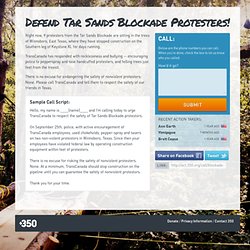 By Adam Federman – August 12, 2013 TransCanada and Department of Homeland Security keep close eye on activists, FOIA documents reveal Update, August 16: Since many readers requested we publish it, here is the complete report by the Bryan County investigator Spy_Report_Redacted.pdf. 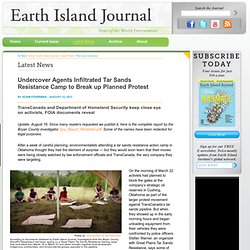 Some of the names have been redacted for legal purposes. After a week of careful planning, environmentalists attending a tar sands resistance action camp in Oklahoma thought they had the element of surprise — but they would soon learn that their moves were being closely watched by law enforcement officials and TransCanada, the very company they were targeting. Tar Sands Pipeline Could Contaminate US Agricultural Water Supply - mybigearth. No one knows how to stop these tar-sands oil spills. Thousands of barrels of tar-sands oil have been burbling up into forest areas for at least six weeks in Cold Lake, Alberta, and it seems that nobody knows how to staunch the flow. 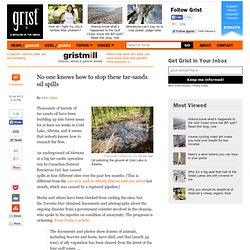 An underground oil blowout at a big tar-sands operation run by Canadian Natural Resources Ltd. has caused spills at four different sites over the past few months. (This is different from the 100-acre spill in Alberta that we told you about last month, which was caused by a ruptured pipeline.)

Reflections on the Age of Anxiety. Perhaps more than any other chapter in history, the past hundred years have shown us how incredibly intelligent we are. We have glimpsed just a flash of our collective potential. We have cured diseases. We have learned to fly, even to put a man on the moon. We have constructed great societies. And we have also seen our darkest side. It would be hard to call our fear of each other irrational. When I walk down the street I see people who are different from me. You Can't Eat Tar Sands. A startling new study from the Center for Global Development shows that full development of the Canadian Tar Sands would have a devastating effect on global food production, especially in climate vulnerable continents such as Africa.

A loss in agricultural productivity due to climate change will affect more than 3 billion people around the world. Because of the massive carbon emissions from the Canadian Tar Sands, full exploitation of the resource would lead to a 5.6 percent loss in productivity, with 25 countries experiencing losses of 7.1 percent. Countries with especially damaging impacts include the already drought stricken Ethiopia, Sudan, and other Horn of Africa nations, as well as major population centers like India.

This is incredibly unjust. As the report says, "There is striking asymmetry in regional impacts. West Coast Environmental Law Reacts to Prime Minister's Statements About Potential "Hijacking" of Enbridge Hearings by Foreign Interests. Pipelines create profits, perils. By Betsey Piette Published Jan 8, 2012 10:59 AM Not so hidden in the late December “tax deal” was a provision to force a quick decision on the Keystone XL oil pipeline project, which would stretch from the Tar Sands oil extraction project in Alberta, Canada, to the Gulf of Mexico.

While first threatening to veto any bill that included the project, President Barack Obama ended up approving the final package with no mention of this environmental threat. The proposed 1,700-mile pipeline threatens a vital aquifer for millions of people and undermines the rights of many Indigenous nations on whose land it would run. Acts of Gross negligence: The Tar Sands and the Proposed Enbridge Northern Gateway pipeline.

White House, GOP Battle for Supremacy on Tar Sands Pipeline. Good News: Tar Sands Action is Joining 350.org. Below is a letter we just sent out to the “Tar Sands Action” email list — we’re thrilled to welcome the team into the 350.org family. Hello friends, This is an email designed to 1) reduce the amount of email you get and 2) increase our effectiveness in the fight against tar sands, and the other really bad ideas of the fossil fuel industry. Early last summer when folks decided to take on the Keystone Pipeline, we set up tarsandsaction.org so we could have a broad front supported by many groups. Matt, Linda, Rae, Duncan and Josh came on board and got to work—those of you who came to DC to get arrested met them in person, and the rest of you have been in touch with them one way or another all fall.

Now the good news is that we’re going to try to keep them going—in fact, we’re bringing them aboard 350.org as our US Climate Action Team. Since many of you belong to both tarsandsaction.org and 350.org, we know you’ve been getting duplicate emails, and that seems pointless. Keep Shell Out of the Arctic!: Thank You: Save BioGems. Winners announced for Oil Cleanup X CHALLENGE. The winners of the US$1.4 million Wendy Schmidt Oil Cleanup X CHALLENGE were announced today (second-place Team NOFI's Current Buster Technology is pictured) Image Gallery (3 images) Sierra Club: Saying no to the Keystone XL Tar Sands Oil Pipeline. Getting Political with the Tar Sands Action. This post was written by Dick Smith, a local leader in Wisconsin. Mowed grass triggers tar sand lawsuit - environment - 12 October 2011.