Declassified CIA Document Shows “Remote Viewing” Attempt of a “Galactic Federation” Headquarters. The Facts:Data from the CDC's Vaccine Adverse Events Reporting System (VAERS) shows, as of today, 929 deaths, 316 permanent disabilities and more than 15,000 adverse reactions reported after of the COVID-19 vaccine.Reflect On:Should private institutions/companies have the right to mandate this vaccine for people and employees? 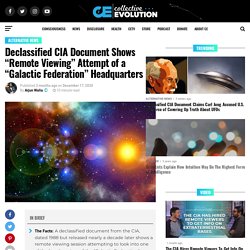 When it comes to vaccines, should freedom of choice remain? Why is only one perspective presented by mainstream media? What Happened: According to the CDC Vaccine Adverse Events Reporting System (VAERS), as of today (February 20th, 2021) 929 deaths, 316 permanent disabilities and more than 15,000 adverse events have been reported from people after taking the COVID-19 vaccine. This mainly represents reports that are coming in from the United States. The data shows that 799 of the deaths were reported in the U.S., and that about one-third of those deaths occurred within 48 hours of the individual receiving the vaccination. Army Remote Viewer Peers Into The Origins of Humanity To Find Out If Humans Were Created. The Facts:A few years ago researchers discovered that memory can be transferred between, in this case, snails. 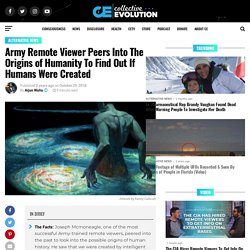 The research changed the standard theory of memory and thoughts about how the brain remembers.Reflect On:How much do we have yet to discover? Are we even physical beings? Stanford’s Most Successful Remote Viewer Reveals Location Of 4 Alien Bases On Earth. The Facts:The U.S. had a program called STARGATE. 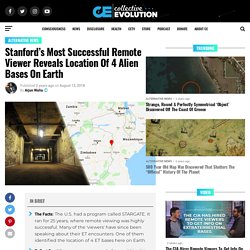 It ran for 25 years, where remote viewing was highly successful. Many of the 'viewers' have since been speaking about their ET encounters. One of them identified the location of 4 ET bases here on Earth.Reflect On:Why are so many people from within this program sharing such information? Is remote viewing something military has used quietly for some time? It was extremely successful and credible practice, but why wasn't this part of the declassification? What is remote viewing? This skill was taught to soldiers in multiple countries around the world, and from what I understand, still is. -->Listened to our latest podcast episode yet? Skilled Army Remote Viewer Reveals Details About The ET Presence On Earth. The Facts:One of Europes leading neurologists, Dr. 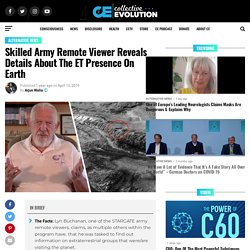 Margareta Griesz-Brisson, MD, PhD, recently gave an interview sharing her opinion that masks are dangerous and should not be mandated. Her interview was removed from YouTube.Reflect On:How are so many renowned doctors and scientists sharing information that, according to many fact-checkers, is completely false? Her opinion is shared by many but again, according to many fact checkers, is completely false. What Happened: Dr. Margareta Griesz-Brisson, MD, PhD, is one of Europes leading neurologists who is currently based in London, UK.

She is one of thousands of doctors and scientists from around the world who have strongly disagreed with the measures taken by the World Health Organization at multiple governments to combat COVID-19. Is this false news? In a recent interview, she states the following: Is She Correct About Masks? We know that wearing a mask outside health care facilities offers little, if any, protection from infection. Physicist Hired By The CIA Shares His Cancelled Ted Talk On Extrasensory Perception (ESP) *This is an older article we published which originated here at CE, with some updated information in it. 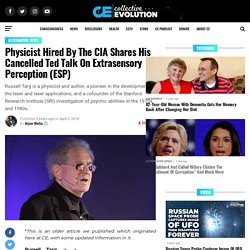 Russell Targ is a physicist and author, a pioneer in the development of the laser and laser applications, and a cofounder of the Stanford Research Institute (SRI) investigation of psychic abilities in the 1970s and 1980s. SRI is a research and development think tank in Menlo Park, California. Called remote viewing, his work in the psychic area has been published in Nature, The Proceedings of the Institute of Electronic and Electrical Engineers (IEEE), and the Proceedings of the American Association the Advancement of Science (AAAS). Targ has a bachelor’s degree in physics from Queens College and did his graduate work in physics at Columbia University. He has received two National Aeronautics and Space- Administration awards for inventions and contributions to lasers and laser communications.

Below is a planned talk by Targ for TED that was cancelled by TED. Enjoy! Find out more here. Remote viewing. Remote Viewing How To. One of the burning questions people have when they first discover remote viewing is, How can I try it? 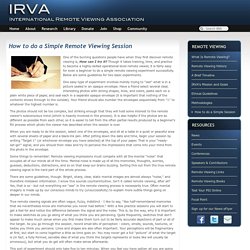 Though it takes training, time, and practice to become a highly-skilled operational-level remote viewer, it is fairly easy for even a beginner to do a simple remote viewing experiment successfully. Below are some guidelines for two basic experiments. One easy type of experiment involves merely trying to "see" what is in a picture sealed in an opaque envelope. Have a friend select several clear, interesting photos with strong shapes, lines, and colors, paste each on a plain white piece of paper, and seal each in a separate opaque envelope (it is important that nothing of the contents shows through to the outside).

Your friend should also number the envelopes sequentially from "1" to whatever the highest number is. How Scientists Found “Paranormal Perception” Channels Within Human Beings. We're creating viewer supported news. 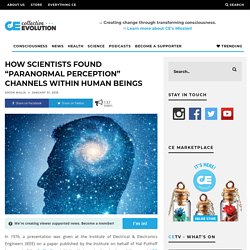 Become a member! In 1976, a presentation was given at the Institute of Electrical & Electronics Engineers (IEEE) on a paper published by the Institute on behalf of Hal Puthoff (now part of the To The Stars initiative that received and released the recent UFO Pentagon footage) and Russell Targ. The paper was titled “A Perceptual Channel For Information Transfer Over Kilometer Distances: Historical Perspectives and Recent Research.”