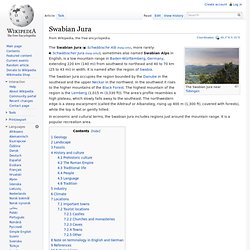 It is named after the region of Swabia. In economic and cultural terms, the Swabian Jura includes regions just around the mountain range. It is a popular recreation area. Geology[edit] The geology of the Swabian Jura is mostly limestone, which formed the seabed during the Jurassic period. In some places, former volcanic activity has left traces, such as maars and hills. Tertiary relicts can be found at the southern part of Swabian Jura. 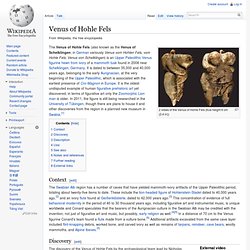 It is dated to between 35,000 and 40,000 years ago, belonging to the early Aurignacian, at the very beginning of the Upper Paleolithic, which is associated with the earliest presence of Cro-Magnon in Europe. It is the oldest undisputed example of human figurative prehistoric art yet discovered, in terms of figurative art only the Zoomorphic Lion man is older. In 2011, the figure is still being researched in the University of Tübingen, though there are plans to house it and other discoveries from the region in a planned new museum in Swabia.[1] Context[edit]

Aurignacian. The Aurignacian culture (/ɔrɪɡˈneɪʃən/ or /ɔrɪnˈjeɪʃən/) is an archaeological culture of the Upper Palaeolithic, located in Europe and southwest Asia. 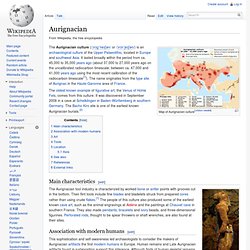 Cro-Magnon. Cro-Magnon ( i/kroʊˈmænjən/ or US pronunciation: /kroʊˈmæɡnən/; French: [kʁomaɲɔ̃]) is a name that has been used to describe the first early modern humans (early Homo sapiens sapiens) of the European Upper Paleolithic.[1] Current scientific literature prefers the term European Early Modern Humans (EEMH), to the term 'Cro-Magnon,' which has no formal taxonomic status, as it refers neither to a species or subspecies nor to an archaeological phase or culture.[1] The earliest known remains of Cro-Magnon-like humans are radiocarbon dated to 43,000 years before present.[2] The Cro-Magnon are the ancestors of modern Europeans. 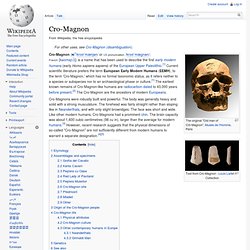 Cro-Magnons were robustly built and powerful. The body was generally heavy and solid with a strong musculature. The forehead was fairly straight rather than sloping like in Neanderthals, and with only slight browridges. The face was short and wide. Etymology[edit] Prehistoric Europe. From the Lower Paleolithic, approximately 1.8 million[1] years ago, and far into the Upper Paleolithic or 20,000 years ago, Europe was populated by Homo erectus and Homo neanderthalensis. 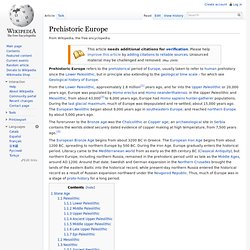 In the Upper Paleolithic and Mesolithic, from about 43,000[2] to 6,000 years ago, Europe had Homo sapiens hunter-gatherer populations. During the last glacial maximum, much of Europe was depopulated and re-settled, about 15,000 years ago. The European Neolithic began about 9,000 years ago in southeastern Europe, and reached northern Europe by about 5,000 years ago.

The forerunner to the Bronze age was the Chalcolithic or Copper age; an archaeological site in Serbia contains the worlds oldest securely dated evidence of copper making at high temperature, from 7,500 years ago.[3] The European Bronze Age begins from about 3200 BC in Greece. Stone Age[edit] Paleolithic[edit] Lower Paleolithic[edit] The earliest inhabitants of Europe from 1.8 million years ago used Oldowan pebble tool technology. Paleolithic flutes. A number of flutes dating to the European Upper Paleolithic have been discovered. 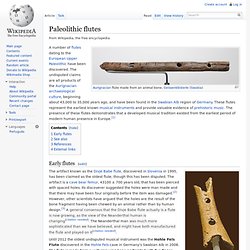 The undisputed claims are all products of the Aurignacian archaeological culture, beginning about 43,000 to 35,000 years ago, and have been found in the Swabian Alb region of Germany. These flutes represent the earliest known musical instruments and provide valuable evidence of prehistoric music. The presence of these flutes demonstrates that a developed musical tradition existed from the earliest period of modern human presence in Europe.[1] Early flutes[edit] The Divje Babe "flute"