Unexpected Land Art Beautifully Formed in Nature. It's fairly impossible to predict what British artist Andy Goldsworthy might come up with next! 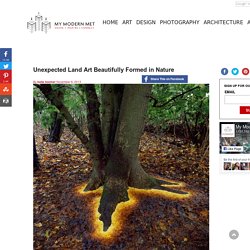 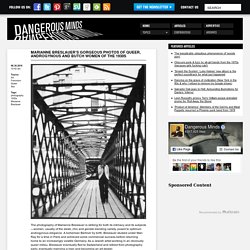 A bohemian Berliner by birth, Breslauer studied under Man Ray for a time in Paris and achieved some commercial success before returning home to an increasingly volatile Germany. As a Jewish artist working in an obviously queer milieu, Breslauer eventually fled to Switzerland and retired from photography early, eventually marrying a man and becoming an art dealer. Among the many beautiful faces captured by Breslauer was her dear friend, Swiss writer, journalist and photographer Annemarie Schwarzenbach, who she described as “neither a man nor a woman, but an angel, an archangel.” The Bus - Paul Kirchner. Dogs Pose with Their "Dads" for Quirky Father's Day Portraits. With Father's Day fast approaching, photographer Chantal Adair of The Dog Styler has found a hilarious way to celebrate a certain set of dads who often go unacknowledged: dog dads. 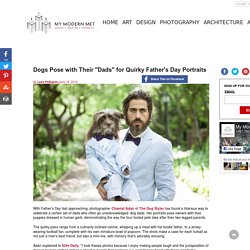 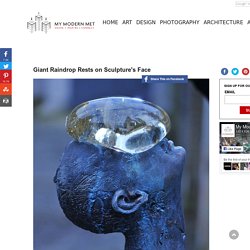 A huge raindrop stands suspended on the figure's face as he looks up toward the sky. The work has several meanings including representing man's delicate relationship with nature. As Bilyk explains to us, "The name of the work is 'Rain,' which seems clear and obvious at first glance. However, it is quite broad and has several meanings. Akiya Kageichi. Japanese illustrator Akiya Kageichi, who also goes by the handle “Golden Gravel” draws nicely complex line and color compositions that often appear layered, or have a collage-like character to their arrangement. 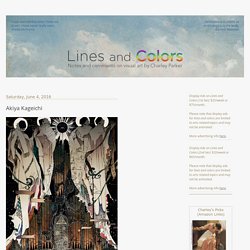 His interesting use of fine line, color, texture and pattern give your eye a lot to play with as you wander through his images. His website is a Tumblr gallery (note the second page of images), that doesn’t anything in the way of bio information. To my eye, he appears to take some inspiration from Golden Age European illustrators like Kay Nielsen and Harry Clarke. Evening Photos Explore the Peaceful Side of Tokyo's Rarely Empty Streets. Franck Bohbot’s cinematographic shots depict the streets of Tokyo awash in a uniquely peaceful light. 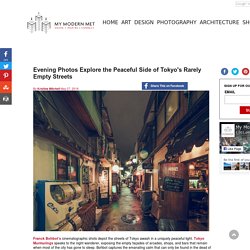 Tokyo Murmurings speaks to the night wanderer, exposing the empty façades of arcades, shops, and bars that remain when most of the city has gone to sleep. Bohbot captures the emanating calm that can only be found in the dead of night. His colorful images reveal a rare side of the bustling city and captures the beauty of the city's congested, asymmetrical architecture when it is not crowded by humans. 14 Inspirational Quotes Written In Beautiful Calligraphy. 11-Year-Old Artist Creates Amazingly Detailed Drawings of Wildlife. Meet Dušan Krtolica, one of the most talented 11-year-olds ever. 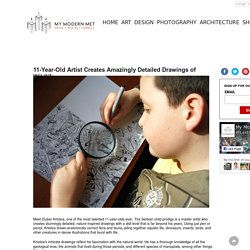 The Serbian child prodigy is a master artist who creates stunningly detailed, nature-inspired drawings with a skill level that is far beyond his years. Untitled. Artist Danny Shervin spends an incredible amount of time perfecting his nature-inspired imagery only to set it on fire once he’s done. 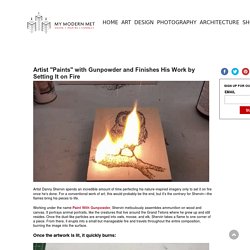 For a conventional work of art, this would probably be the end, but it’s the contrary for Shervin—the flames bring his pieces to life. Working under the name Paint With Gunpowder, Shervin meticulously assembles ammunition on wood and canvas. Delicate Japanese Oil Paintings of Ethereal Woman Submerged with Nature. Artist Miho Hirano’s oil paintings communicate a delicate beauty through the use of soft colors and fluid brushstrokes. 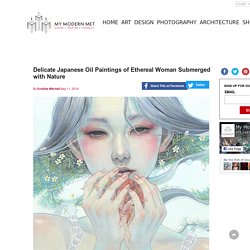 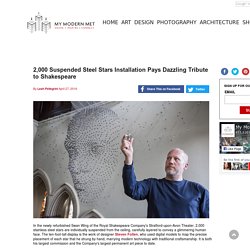 The ten-foot-tall display is the work of designer Steven Follen, who used digital models to map the precise placement of each star that he strung by hand, marrying modern technology with traditional craftsmanship. It is both his largest commission and the Company's largest permanent art piece to date. Miyazaki Cards: Cute Deck Filled With Characters From Studio Ghibli Movies. A French illustrator Pauline Renard who goes by the nickname Pow has been working on a cool DIY project.

She’s been drawing illustrations of her favourite Studio Ghibli movie characters on a deck of cards. A perfect gift for a Japanese anime fan? It would be, but unfortunately, you can’t purchase these anywhere. 25 Beautiful Beer Label Designs. "Blackout Tattoo" Trend Cloaks the Body in Black Ink to Make a Bold Visual Statement. As tattoos continue to grow in popularity, artists push the envelope with the color, complexity, and scope of their designs.

The classic Sailor Jerry style of tattooing—which champions dark outlines and a limited color palette—is joined by other styles such as dotwork, watercolor, and cross stitch. Another popular and striking approach that has been gaining recent attention online is called blackout, which covers the skin with solid fields of black ink. Like any technique, how a blackout tattoo looks falls on a spectrum. Some artists will fill their client’s skin with large areas of ink that turns entire body parts another color. Others might shy away from that much black, and they’ll instead use it as a bold design element that’s coupled with intricate lines, geometric shapes, or dots. Check out 17 of our favorite blackout tattoos, below. Above: @oddtattooer. Did you know? - 14 Stunning Space Travel Posters from NASA to Inspire the Futuristic Dreamer in You. Remember all those amazing travel posters they use to make back in the day? They made you dream.

They made the places you’d never visited that much more real. And, most importantly, they made you want to travel. Geometric Sleeve Tattoos Visually Crystalize Across the Body. Brandon Crone combines multiple tattoo styles to produce cohesive, stunning pieces of body art. Fusing dotwork, blackwork, and geometry, he adorns clients’ arms and chests with designs that flow from intricate angular structures to large areas of solid black. In addition, the non-inked areas of skin create secondary patterns found within the negative space of the tattoos. Through these meticulous shapes, Crone explores “the infinite nature of awareness and the vast potential of the human mind.”

As the designs fold and unfold over the body, the geodesic patterns represent his deep interests in “the realms of quantum physics, eastern philosophies, and the power of the human mind.” The results are eye-catching and thought-provoking. Geometric Fine Line Tattoos by LA's Famous Dr. Woo. This past December, The New York Times ran a story about Brian Woo (aka Dr. Woo), calling him the "Tattoo Artist for the Hollywood Set. " Having inked such celebrities as Drake, Ellie Goulding, and Cara Delevingne, the 33-year-old is one of the most in-demand tattoo artists in Los Angeles with a wait list that's six months long.

Young and old have fallen in love with his signature style of intricate, fine-line, single-needle style pieces. With an Instagram following that now stands at 454,000, he's also followed by a legion of online fans who watch his every move. Woo started off by dabbling in tattoos when he was just 13 or 14 years old. When In Barcelona Watch Your Step, You Might Be Walking On Art!