Mr. Trump, advisers said, was in high spirits after he fired off the posts. But by midafternoon, after returning from golf, he appeared to realize he had gone too far, although he still believed Mr.

Obama had wiretapped him, according to two people in Mr. Trump’s orbit.“No, that’s above my pay grade,” said Sean Spicer, the White House press secretary and a feisty Trump loyalist, when asked Tuesday at an on-camera briefing if he had seen any evidence to back up Trump’s accusation. The reporters kept at him, but Spicer pointedly and repeatedly refused to offer personal assurances that the president’s statements were true.


“No comment,” Attorney General Jeff Sessions said earlier in the day. Last week, Sessions recused himself from any investigations involving the Trump campaign’s contacts with Russia.

“I don’t know anything about it,” John F. Kelly, the Homeland Security secretary, said on CNN on Monday.

Terrible! Just found out that Obama had my "wires tapped" in Trump Tower just before the victory. Nothing found. This is McCarthyism! How low has President Obama gone to tapp my phones during the very sacred election process. This is Nixon/Watergate. Bad (or sick) guy! Trump aides address his wiretap claims: ‘That’s above my pay grade’ WASHINGTON — President Donald Trump has no regrets. 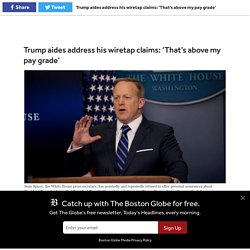 His staff has no defense. After weeks of assailing reporters and critics in diligent defense of their boss, Trump’s team has been uncharacteristically muted this week when pressed about his explosive — and so far proof-free — Twitter posts on Saturday accusing President Barack Obama of tapping phones in Trump Tower during the 2016 campaign. The accusation — and the FBI director, James B. Comey, and the former national intelligence director, James R. Clapper Jr., emphatically deny that any such wiretap was requested or issued — constitutes one of the most consequential accusations made by one president against another in American history. So for Trump’s allies inside the West Wing and beyond, the tweetstorm spawned the mother of all messaging migraines.

“No comment,” Attorney General Jeff Sessions said earlier in the day. “I don’t know anything about it,” John F. Rep. Other Hill Republicans have responded with similar verbal shrugs. FBI Director Comey incredulous over Trumps tweets. The source said Comey was concerned that the allegation would make the FBI look bad, and that concern was part of what prompted the FBI director to have his staff reach out to staff at the Justice Department asking them to knock down the allegation. 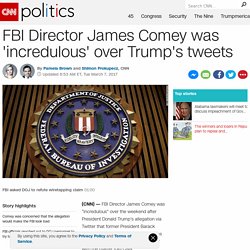 The source said Comey felt "institutionally he has to push back on this" because the magnitude of the allegations that Comey knows not to be true. Over the weekend, senior-level officials within the FBI reached out to career personnel at the Justice Department to try to clear up reports that Obama wire-tapped Trump's phone, a US official told CNN. Part of the discussion was the FBI asking for DOJ to publicly knock down the allegations, which so far DOJ has not done. Comey was aware of those discussions, the US official said, but Comey himself did not reach out to DOJ over the weekend. "He might come out and say only time will tell, but right now they (FBI and DOJ) should be in the exact same place and they're not," the source said.

Sen. John Oliver - Trump's Obama Conspiracy. Obama press secretary fires back at Spicer's claim that wiretapping evidence 'above my pay grade' Talk:beyond one's pay grade. This usually has the connotation of "I'd do that if you give me a raise" kindof thing, but I'm not sure how to word that. 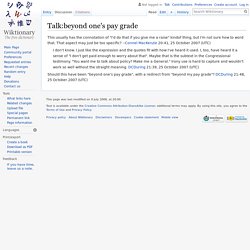 That aspect may just be too specific? --Connel MacKenzie 20:41, 25 October 2007 (UTC) I don't know. I just like the expression and the quotes fit with how I've heard it used. I, too, have heard it a sense of "I don't get paid enough to worry about that".