How Many People Have Walked on the Moon? Astronaut Charles Duke collecting samples during Apollo 16. 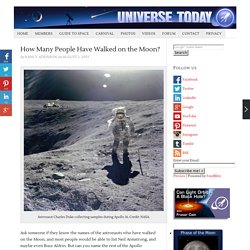 Credit: NASA. Ask someone if they know the names of the astronauts who have walked on the Moon, and most people would be able to list Neil Armstrong, and maybe even Buzz Aldrin. But can you name the rest of the Apollo astronauts who made it down to the lunar surface? In total twelve people have walked on the Moon. Besides Neil Armstrong and Buzz Aldrin – who were the first two astronauts to leave their bootprints on the Moon — there were also Pete Conrad, Alan Bean, Alan Shepard, Edgar Mitchell, David Scott, James Irwin, John Young, Charles Duke, Eugene Cernan, and Harrison Schmitt.

Interestingly, out of the dozen people who walked on the Moon, no one ever did it more than once. Geography. Nasa Earth science. Psychology for Sports Performance. 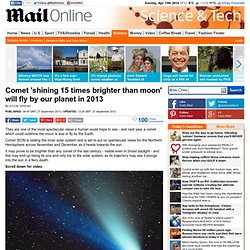 Comet ISON is visiting the inner solar system and is set to put on spectacular views for the Northern Hemisphere across November and December as it heads towards the sun. It may prove to be brighter than any comet of the last century - visible even in broad daylight - and this may end up being its one and only trip to the solar system, as its trajectory may see it plunge into the sun in a fiery death. Photojournal: NASA's Image Access Home Page. Visible Earth: Browse by Sensor. NASA Earth Observatory : Home. 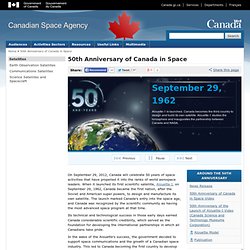 Canada's ISIS satellites achieved near-perfect performance and orbits — with a high percentage of successful experiments. The data spawned more than 1,200 scientific papers. Next year, CASSIOPE will be launched to study “space weather” in the ionosphere, an extension of these early studies. 10/1/2012 to 10/7/2012 September 29, 1962: Canada is the third nation to build a satellite Alouette-1 is launched, making Canada the third country to have designed and built its own satellite. Today, Canada's space industry provides jobs for 8,256 Canadians at over 200 companies, generating $3.4 billion per year for our economy. 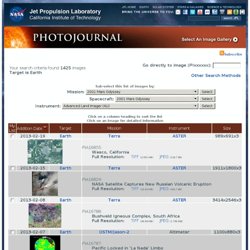 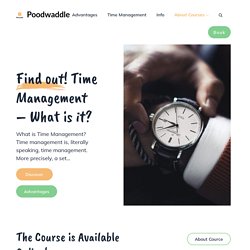 The World Clock tells more than time. It shows a live picture of our changing world. The World Clock is too large for a single page. It had to be divided into multiple categories. You can rotate the map by dragging left or right or by clicking the left and right buttons on the menu. The menu provides several filter options. Multimedia - Video Gallery. Myexploration. Photopic Sky Survey - StumbleUpon. Rosette nebula. 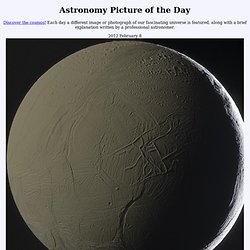