The Eerie Balbal Statues of the Eurasian Steppe. Ancient nomads are virtually invisible in the archaeological record, as they left few traces of their lifestyle behind. 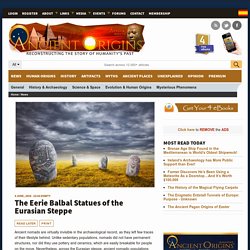 Unlike sedentary populations, nomads did not have permanent structures, nor did they use pottery and ceramics, which are easily breakable for people on the move. Surprising 5,000-Year-Old Cannabis Trade: Eurasian Steppe Nomads Were Earliest Pot Dealers. The nomad tribe known as the Yamnaya, who were among the founders of the European civilization, may have been the first pot dealers, archaeologists say. 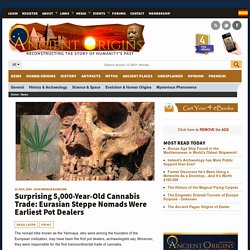 Moreover, they were responsible for the first transcontinental trade of cannabis. The tribe of nomads came from the eastern Steppe region, which is nowadays Russia and Ukraine, and entered Europe about 5,000 years ago, bringing with them herding skills, metallurgy and even the Indo-European languages. According to a recent analysis, they were also responsible for introducing marijuana and establishing the first transcontinental trade of the herb. Cannabis sativa plant ( Wikimedia Commons ) HUNS. HUNS, collective term for horsemen of various origins leading a nomadic or semi-nomadic lifestyle. 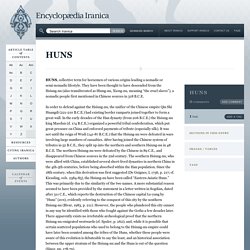 They have been thought to have descended from the Hsiung-nu (also transliterated as Hiung-nu, Xiong-nu, meaning “the cruel slaves”), a nomadic people first mentioned in Chinese sources in 318 B.C.E. In order to defend against the Hsiung-nu, the unifier of the Chinese empire Qin Shi Huangdi (221-210 B.C.E.) had existing border ramparts joined together to form a great wall. In the early decades of the Han dynasty (from 206 B.C.E.) the Hsiung-nu king Maodun (d. 174 B.C.E.) organized a powerful tribal confederation, which put great pressure on China and enforced payments of tribute (especially silk).

It was not until the reign of Wudi (141-87 B.C.E.) that the Hsiung-nu were defeated in wars involving large numbers of casualties. After having joined the Chinese system of tributes in 52 B.C.E., they split up into the northern and southern Hsiung-nu in 48 B.C.E. Huns and eurasian history (practice) - The Washington Post. Description, History, Attila, & Facts. Hun, member of a nomadic pastoralist people who invaded southeastern Europe c. 370 ce and during the next seven decades built up an enormous empire there and in central Europe. 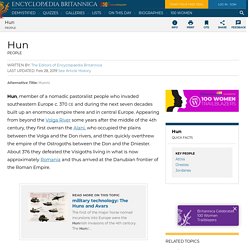 Appearing from beyond the Volga River some years after the middle of the 4th century, they first overran the Alani, who occupied the plains between the Volga and the Don rivers, and then quickly overthrew the empire of the Ostrogoths between the Don and the Dniester. About 376 they defeated the Visigoths living in what is now approximately Romania and thus arrived at the Danubian frontier of the Roman Empire.

Read More on This Topic. MONGOLS. Mystery of Mongol Retreat from Hungary Solved. In 1241, the Mongol army marched into Hungary, defeating the Polish and Hungarian armies and forcing the Hungarian king to flee. 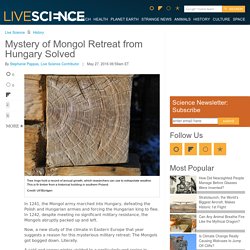 In 1242, despite meeting no significant military resistance, the Mongols abruptly packed up and left. Now, a new study of the climate in Eastern Europe that year suggests a reason for this mysterious military retreat: The Mongols got bogged down. Literally. A cold and snowy winter yielded to a particularly wet spring in Hungary in 1242, according to data from tree rings. As a result, the grasslands of Hungary turned to marsh, said study researcher Nicola Di Cosmo, a historian at Princeton University. Wait For It...The Mongols!: Crash Course World History #17. The Mongols in World History. The great and powerful Xiongnu. Between approximately 300 BC and 450 AD, there existed a nomadic group known as the Xiongnu. 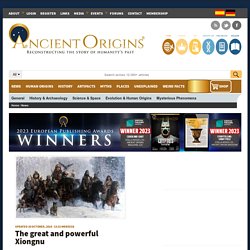 Their ethnic identity has been greatly contested, but they were a very powerful tribal confederation that were considered a great threat to China. In fact, it was their repeated invasions that prompted the small kingdoms of North China to begin erecting barriers, in what later became the Great Wall of China. Xiongnu. 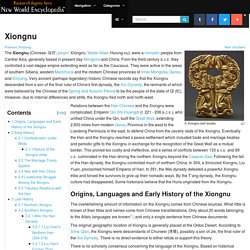 The Xiongnu (Chinese: 匈奴; pinyin: Xiōngnú; Wade-Giles: Hsiung-nu); were a nomadic people from Central Asia, generally based in present day Mongolia and China. From the third century B.C.E. they controlled a vast steppe empire extending west as far as the Caucasus. They were active in the areas of southern Siberia, western Manchuria and the modern Chinese provinces of Inner Mongolia, Gansu and Xinjiang. Very ancient (perhaps legendary) historic Chinese records say that the Xiongnu descended from a son of the final ruler of China's first dynasty, the Xia Dynasty, the remnants of which were believed by the Chinese of the Spring and Autumn Period to be the people of the state of Qǐ (杞).

However, due to internal differences and strife, the Xiongnu fled north and north-west. report this ad. People & History. XIONGNU. XIONGNU (Hsiung-nu), the great nomadic empire to the north of China in the 2nd and 1st centuries BCE, which extended to Iranian-speaking Central Asia and perhaps gave rise to the Huns of the Central Asian Iranian sources. 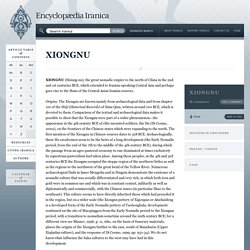 Origins. The Xiongnu are known mainly from archaeological data and from chapter 110 of the Shiji (Historical Records) of Sima Qian, written around 100 BCE, which is devoted to them. Comparison of the textual and archaeological data makes it possible to show that the Xiongnu were part of a wider phenomenon—the appearance in the 4th century BCE of elite mounted soldiers, the Hu (Di Cosmo, 2002), on the frontiers of the Chinese states which were expanding to the north. Ancient people. Scythian, also called Scyth, Saka, and Sacae, member of a nomadic people, originally of Iranian stock, known from as early as the 9th century bce who migrated westward from Central Asia to southern Russia and Ukraine in the 8th and 7th centuries bce. The Scythians founded a rich, powerful empire centred on what is now Crimea. The empire survived for several centuries before succumbing to the Sarmatians during the period from the 4th century bce to the 2nd century ce.

Until the 20th century, most of what was known of the history of the Scythians came from the account of them by the ancient Greek historian Herodotus, who visited their territory. Rites of the Scythians. (Courtesy Andrey Belinski) One of two 2,400-year-old gold vessels found under a mound at the site of Sengileevskoe-2 in southern Russia depicts griffins attacking a stag. 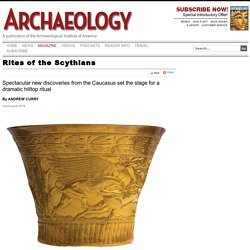 Russian archaeologist Andrey Belinski wasn’t sure what to expect when he found himself facing a small mound in a farmer’s field at the foot of the Caucasus Mountains. To the untrained eye, the 12-foot feature looked like little more than a hillock. Scythians / Sacae - Livius. "Scythians" (Greek Σκύθης) and "Sacae" (Old Persian Sakâ): two renderings of Skudat ("archers"?) 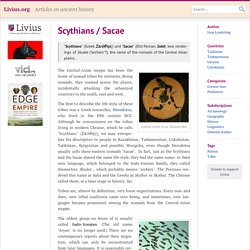 , the name of the nomads of the Central Asian plains. The Central-Asian steppe has been the home of nomad tribes for centuries. Being nomads, they roamed across the plains, incidentally attacking the urbanized countries to the south, east and west. The first to describe the life style of these tribes was a Greek researcher, Herodotus, who lived in the fifth century BCE. Although he concentrates on the tribes living in modern Ukraine, which he calls "Scythians" (Σκύθης), we may extrapolate his description to people in Kazakhstan, Turkmenistan, Uzbekistan, Tajikistan, Kyrgyzstan and possibly Mongolia, even though Herodotus usually calls these eastern nomads "Sacae". Tribes are, almost by definition, very loose organizations. The oldest group we know of is usually called Indo-Iranian.

Amazon Warrior Women. 5901 15079 1 PB. Amazon Warriors Did Indeed Fight and Die Like Men. The Amazon Women: Is There Any Truth Behind the Myth? I oved watching the “Wonder Woman” TV series when I was a girl. I never wanted to dress like her—the idea of wearing a gold lamé bustier and star-spangled blue underwear all day seemed problematic—but the Amazonian princess was strong and resourceful, with a rope trick for every problem. She seemed to be speaking directly to me, urging, “Go find your own inner Amazonian.” When I read the news that Wonder Woman was going to be resurrected for a blockbuster movie in 2016, Batman vs. Superman, it made me excited—and anxious. Would the producers give her a role as fierce as her origins—and maybe some shoulder straps—or would she just be cartoon eye candy?

The fact that she isn’t even getting billing in the title makes me suspicious. Over the years, the writers at DC Comics softened Wonder Woman’s powers in ways that would have infuriated Marston. Amazons. AMAZONS IN THE IRANIAN WORLD.