After 9 Months Of Competition And More Than 130,000 Submissions, Here Are The Most Breathtaking Pics Taken This Year (50 Pics) 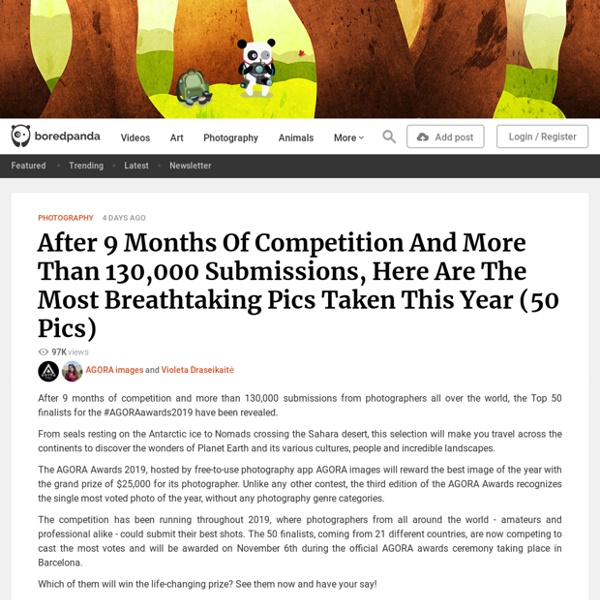 After 9 months of competition and more than 130,000 submissions from photographers all over the world, the Top 50 finalists for the #AGORAawards2019 have been revealed. From seals resting on the Antarctic ice to Nomads crossing the Sahara desert, this selection will make you travel across the continents to discover the wonders of Planet Earth and its various cultures, people and incredible landscapes. The AGORA Awards 2019, hosted by free-to-use photography app AGORA images will reward the best image of the year with the grand prize of $25,000 for its photographer. Unlike any other contest, the third edition of the AGORA Awards recognizes the single most voted photo of the year, without any photography genre categories. The competition has been running throughout 2019, where photographers from all around the world - amateurs and professional alike - could submit their best shots. Which of them will win the life-changing prize?

Mongolian Heavy Metal Band Gets Millions Of YouTube Views : Goats and Soda A band from Mongolia that blends the screaming guitars of heavy metal and traditional Mongolian guttural singing has picked up 7 million views for its two videos. Leather jackets, skull rings and bandannas alongside intricately carved Mongolian horsehead fiddles are just some of the images in the first two music videos the Mongolian band The Hu released on YouTube this fall. Excited listeners from around the globe have posted comments like: "This makes me want to ride a horse and shoot people with a bow" and "This sounds like ancient mongol rock of 1000 b.c. Really badass!"

The Sisyphean Solitude of a Migrant Shepherd Some films don’t need words. El Desierto is one of them. Carly and Jared Jakins’s award-winning short documentary, premiering on The Atlantic today, follows a lone migrant worker as he shepherds thousands of sheep in the Great Basin desert amid a formidable drought. Without a single line of dialogue, the film’s imagery speaks volumes about the isolating plight of America’s migrant workers and the looming specter of climate change. The co-directors, who are married, grew up in the Great Basin, an arid expanse of nearly 190,000 square miles in the western United States. Despite the fact that they were both raised in a wool-growing community, it wasn’t until adulthood that they became aware of the crucial role migrant workers play in the sheep-farming industry.

Trolls Tell Woman She’s ‘Too Ugly’ To Be Posting Pics Of Her Face, She Responds With 3 Selfies Melissa Blake is a freelance writer covering relationships, disabilities and pop culture and has been featured on sites such as CNN and Cosmopolitan. She also has a popular blog called ‘So About What I Said,‘ where she gives inspiring personal insights into living with Freeman-Sheldon Syndrome, a genetic bone and muscular disorder that she has had since birth. Image credits: melissablake As well as her specialist subjects Melissa often makes forays into politics too, giving her thoughts and opinions on a variety of issues.

COVID Underdogs: Mongolia - Indi Samarajiva - Medium The best COVID-19 response in the world Mongolia has had the best COVID-19 response in the world. Not only do they have zero deaths, they have zero local transmissions. Mongolia didn’t flatten the curve or crush the curve — they were just like ‘fuck curves’. In Mongolia, there simply wasn't an epidemic at all. And no, they didn’t just get lucky.

I Photograph Elderly Couples And The Pure And Honest Love That I Witness Is Beyond Amazing (15 Pics) I started off as a family and child photographer five years ago, but what I noticed was that people only came to get photographs taken with their children and spouses. I never had a client asking me to take photographs of their parents or grandparents or even photos of their children and parents. So I decided to divide my work time into two parts. I spent one half of my month photographing my clients the way they wanted me to and the other half was dedicated to requesting grandparents and great-grandparents (who I would invite via model calls or would randomly approach in public places) to come and be photographed by me with their grandkids. On one such shoot in Houston, Texas, this year, I noticed that while I was photographing one grandparent with their grandchild, the other grandparent was just standing silently in a corner.

Petroglyphic Complexes of the Mongolian Altai Petroglyphic Complexes of the Mongolian Altai The numerous rock carvings and funerary monuments found in these three sites illustrate the development of culture in Mongolia over a period of 12,000 years. The earliest images reflect a time (11,000 - 6,000 BC) when the area was partly forested and the valley provided a habitat for hunters of large game. Later images show the transition to herding as the dominant way of life. The most recent images show the transition to a horse-dependent nomadic lifestyle during the early 1st millennium BC, the Scythian period and the later Turkic period (7th and 8th centuries AD). The carvings contribute valuably to our understanding of pre-historic communities in northern Asia.

The Secretary Bird Is So beautiful It Could Easily Become A Pixar Movie Character The secretary bird (Sagittarius Serpentarius) is a large bird of prey related to eagles and falcons. It is named for its black feathered crest on the head that makes it look like 18th century secretaries with feathers and pencils attached to their wigs. But this bird has another important distinction: prominent, long eyelashes that many models would love to have. A World-Famous Pastry Chef's Heartbreaking Regret The impulse to strive for excellence is something that was instilled in Milton Abel II from childhood. Growing up in Kansas City, the famed jazz musician Milton Abel Sr. immersed his son in the vibrant world of live music, where he was exposed to dedicated artists like his father. When the younger Abel moved to New York and embarked on his dream of working in the culinary arts, it only followed that he would pursue that path with fervor. “My dad was the best at what he did,” says Milton Abel II in Ben Proudfoot’s short documentary That’s My Jazz. “So it was important for me to carry on that legacy, and try to be a part of an elite few in whatever profession I chose.”