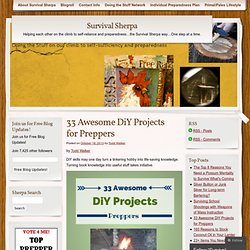 Turning book knowledge into useful stuff takes initiative. You have to start somewhere. Below you’ll find a slew (33 counts as a slew, right?) Of ideas to help you on your journey to self-reliance and preparedness. Let’s get started Doing the Stuff: I know y’all have more to add to this list. Keep doing the stuff, Todd P.S. – You can also connect with us on Twitter, Pinterest, Google +, and our Facebook page. P.P.S ~ If you find value in our blog, DRG and I would appreciate your vote on the “Top Prepper Sites“! Thanks for sharing the stuff! Copyright Information: Content on this site (unless the work of a third-party) may be shared freely in digital form, in part or whole, for non-commercial use with a link back to this site crediting the author.

36 DIY Survival Projects. Posted on Sep 08, 2010 in DIY Projects, Emergency Preparedness & Survival Source: Survival Spot by Chrystle, aka Survival Girl One of the most rewarding things in life is the ability create things. As a Prepper, I really enjoy “Do It Yourself” projects that help me to discover new ways for my family to become more self sufficient. One of my favorite things to do on a Saturday is scour through my folder of “How To” articles and pick out a family project to get involved in. Here I’ve compiled this list with some of my favorite guides to get you started: Food Beef Jerky Survival Food Bars Yogurt Cheese Butter Drinks Sports Drink Beer.

Yes, That’s A Tampon In My Mouth: The Swiss Army Survival Tampon — 10 Survival Uses. Do me a favor for the next five minutes. 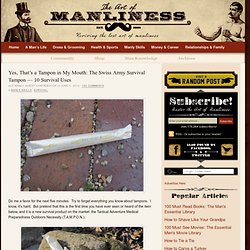 Try to forget everything you know about tampons. I know, it’s hard. But pretend that this is the first time you have ever seen or heard of the item below, and it is a new survival product on the market: the Tactical Adventure Medical Preparedness Outdoors Necessity (T.A.M.P.O.N.). All kidding aside, a tampon really does have a ton of uses to a survivor. One could even argue for including a couple in your survival kit. Before I get into the details of this post, a brief history of the tampon might surprise you. The tampon is actually regulated in the US by the Food & Drug Administration as a Class II Medical Device. Regardless of intended use, the common tampon has many practical survival uses. TAMPON Survival Use #1: Medical Bandage Tampons are sterile, come very well-packaged in their own waterproof sleeves, and are designed to be ultra-absorbent — making them the perfect first aid bandage.

Handy Homemade Survival Tool. You can use it as a chisel initially and cut a square hole the width of the tip, remove that, then tap and turn, tap and turn. 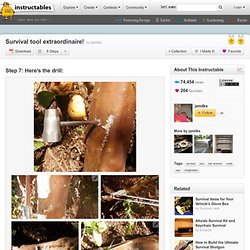 I used a branch to hit the top with. You don't want to POUND it into the wood as the tool may not break but will be hard to turn. Be patient, periodically work it out of the wood while turning and remove some of the chips. Incidentally, as you may notice this is actually a exposed root (on a guava tree- fairly hard wood) but for some reason, I couldn't get some of the pictures to stay oriented correctly so it looks like a branch or trunk...which I guess is Ok because it may have more uses going into a vertical surface.... Pill Bottle Survival Kit. Paracord Belt With Carabiner Buckle. (More of on this and other belt/buckle designs at This is what you end up with - A one and three quarter inch wide paracord belt with a removable 3000lb carabiner at one end and a 2500lb triangle D-ring at the other. 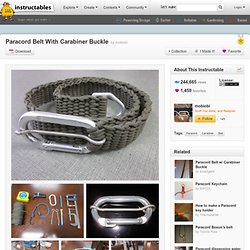 The webbing should be good for around 7000lb, with the seven down and back runs. The whole belt comes apart with a quick undo of the knot hidden behind the D-ring, giving you just over 100' of paracord. The first pic is most of what you need to make one, more or less, including the table, or a board, or something to but the clamps on. Oval carabiners seem to work well, the second pic is a 4"X2" 18kN Black Diamond. Pic three is my setup. Next you can see here the cord run up from the spool on the floor, back and forth 7 times, then tied at the top of the carabiner. I started out using whatever I had handy, which was this pen body, and then this extra cross-pin. Turn A Can Tab Into A Survival Fish Hook. M40 Project - Dollar Survival Knife. M40's Dollar Survival Knife Okay, so I did a 10 cent survival knife.

Now it's time to go high end... this time we'll spend a whole buck. I know it's a splurge, but why the heck not? For the Dollar Survival Knife, I use reciprocating saw blades. These are commonly known as Sawzall blades after the original Sawzall tool that uses them. I like to use the 'demolition grade' blades. The blade above is rated for use with 'nailed wood', meaning that it won't kill it to saw through nails... sounds good to me. I'll mention here that you have several options for removing the paint and for hardening. While I typically harden and then temper these, I will mention that they do okay with no additional hardening. So here's my blade after a trip to 2000+ degrees and a water quench (blade only)... ...and after some cleanup and tempering.

The possibilities for handles, sheaths and finishes are near endless.