This ‘Cryptically Carnivorous’ Plant Has Been Hiding in Plain Sight, Waiting for Flesh - Atlas Obscura. Orchid thought to be extinct in UK found on roof of London bank. A rare species of orchid believed to have been extinct in the UK has been discovered on the roof of an office building in the City of London. 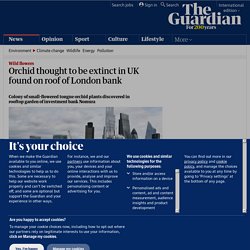 Blooming Corpse Flower Draws Spectators to Gas Station. This technology allows plants to communicate with farmers. Scientists at the Swiss deep tech company Vivent have created technology that allows us to know exactly what our plants need. 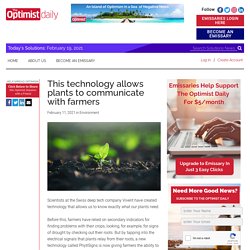 Scientists Taught Spinach to Send Emails About Hazmat in the Soil. While it’s unlikely that your email inbox would contain a message sent by spinach, it’s not impossible. 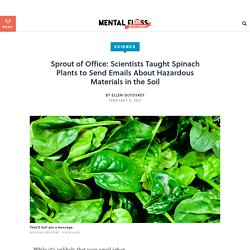 In late 2016, engineers at Massachusetts Institute of Technology (MIT) published a study [PDF] in the journal Nature Materials detailing how they taught spinach plants to transmit automatic emails. The news recently re-circulated, due in part to an updated article from Euronews, and social media users wasted no time in churning out all their best spinach-related jokes. Comical though it seems, the study wasn’t just done for fun. Food for thought? French bean plants show signs of intent, say scientists. Crown Shyness - When Trees Avoid Touching Each Other. Crown shyness or canopy disengagement is a mysterious natural phenomenon in which the crowns of some tree species do not touch each other, but are separated by a gap clearly visible from ground level. 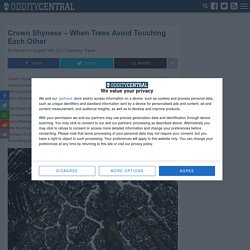 The effect usually occurs between trees of the same species, but has also been observed between trees of different species. Australian stinging tree reveals entirely new family of neurotoxins. New research from the University of Queensland has solved the mystery behind the sting of one of the most venomous plants on the planet. 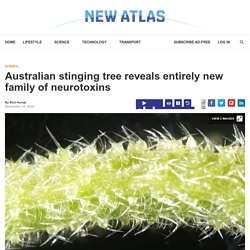 The discovery of a previously unknown neurotoxin explains how Australian stinging trees cause excruciating pain that can last for extraordinarily long periods. Australia is well-known for its broad assortment of venomous animals. 30 Types Of Succulents That Look Like Something Out Of This World. Welcome to the wonderful and weird world of succulents! 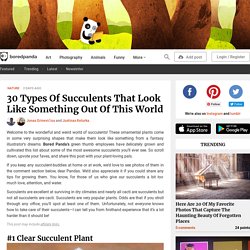 These ornamental plants come in some very surprising shapes that make them look like something from a fantasy illustrator’s dreams. How Venus flytraps evolved their taste for meat. How does a plant develop a taste for flesh? 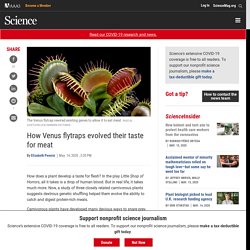 In the play Little Shop of Horrors, all it takes is a drop of human blood. But in real life, it takes much more. Now, a study of three closely related carnivorous plants suggests dextrous genetic shuffling helped them evolve the ability to catch and digest protein-rich meals. Carnivorous plants have developed many devious ways to snare prey. How to Harvest and Use Nature's Aspirin. Editor’s Note: This is a guest post from wilderness survival expert and instructor Creek Stewart. 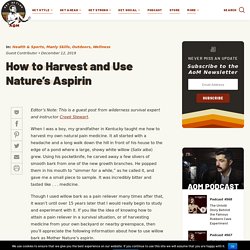 When I was a boy, my grandfather in Kentucky taught me how to harvest my own natural pain medicine. Arborists Have Cloned Ancient Redwoods From Their Massive Stumps. A team of arborists has successfully cloned and grown saplings from the stumps of some of the world’s oldest and largest coast redwoods, some of which were 3,000 years old and measured 35 feet in diameter when they were cut down in the 19th and 20th centuries. 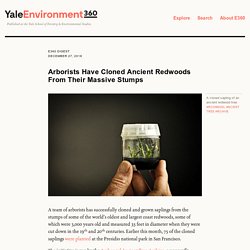 Earlier this month, 75 of the cloned saplings were planted at the Presidio national park in San Francisco. The initiative is run by the Archangel Ancient Tree Archive, a nonprofit working to reestablish ancient redwood forests to help combat climate change. Coastal redwoods, which can grow an average 10 feet per year, sequester 250 tons of carbon dioxide from the atmosphere over their lives, compared to 1 ton for an average tree. Flowers originated 50 million years earlier than previously thought. Orchids – Quartz Obsession. Pathologists Ponder Preserving Evidence after Bioterror Attack. If the networks ever roll out CSI: Topeka, there may be an episode devoted to a dying cornfield, stricken by a deadly microbe. 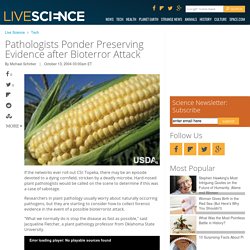 Hard-nosed plant pathologists would be called on the scene to determine if this was a case of sabotage. Researchers in plant pathology usually worry about naturally occurring pathogens, but they are starting to consider how to collect forensic evidence in the event of a possible bioterrorist attack. "What we normally do is stop the disease as fast as possible," said Jacqueline Fletcher, a plant pathology professor from Oklahoma State University. Sciencemag. We have land plants to thank for the oxygen we breathe. And now we have a better idea of when they took to land in the first place. While the oldest known fossils of land plants are 420 million years old, researchers have now determined that pond scum first made landfall almost 100 million years earlier. “[This] study has important global implications, because we know early plants cooled the climate and increased the oxygen level in the Earth’s atmosphere,” conditions that supported the expansion of terrestrial animal life, says Tim Lenton, an earth system scientist at the University of Exeter, United Kingdom who was not involved with the work.

For decades biologists have been trying to come up with a reliable birth date for land plants. Lacking backbones and hard shells, plants leave relatively little behind in the fossil record, so researchers suspect even the oldest plant fossils don't represent the first flora. Aeon. At first glance, the Cornish mallow (Lavatera cretica) is little more than an unprepossessing weed.

It has pinkish flowers and broad, flat leaves that track sunlight throughout the day. However, it’s what the mallow does at night that has propelled this humble plant into the scientific spotlight. Hours before the dawn, it springs into action, turning its leaves to face the anticipated direction of the sunrise. The mallow seems to remember where and when the Sun has come up on previous days, and acts to make sure it can gather as much light energy as possible each morning.

When scientists try to confuse mallows in their laboratories by swapping the location of the light source, the plants simply learn the new orientation. OIPC BMP Hogweed. Atlasobscura. Confronting the environmental cost of marijuana. Scientists Find Tequila Plants Hold the Key to Surviving Global Warming. What tastes great in a margarita, can be either smoky or smooth, and may hold the key to how plants of the future will survive global warming? Intact mushroom and mycophagous rove beetle in Burmese amber leak early evolution of mushrooms – HeritageDaily. Earth - Real-life zombies that are stranger than fiction. The zombies we know from fiction are ferocious, flesh-eating post-humans. And while such stories have never come true, nature is full of disturbingly similar cases of zombification among plants and animals. The Way Cashews Grow Is Mildly Shocking If You've Never Seen It Before. Ophiocordyceps unilateralis - Wikipedia.

O. unilateralis and related species are known to engage in an active secondary metabolism, among other reasons, for the production of substances active as antibacterial agents that protect the fungus-host ecosystem against further pathogenesis during fungal reproduction. Remembering Plants – The Brains Blog. Plants eat animals—at least, some plants, and some animals. Perceiving Plants – The Brains Blog. In What a Plant Knows, Daniel Chamowitz reports what plant biologists apparently have known for a long time: although plants generally stay in one place (they’re sessile), they actively negotiate their environments.

Not just their cells, like all living cells, constantly do things, but whole plants and their parts—their roots, shoots, and leaves—respond to their environment. For instance, plants use sunlight to convert water and carbon dioxide into energy. 15 of the World’s Funkiest Fungi. When it comes to the natural world, fungi are (truly) in a kingdom all their own. They help humans brew tasty beverages like beer, they recycle nutrients from dead plants and animals, and they provide nutrients for trees. Mushrooms May Really Be Magic After All. History, Travel, Arts, Science, People, Places. Foraging for Edible Plants: Purslane GF Video - GardenFork.TV - DIY Living. Purslane - Weed It or Eat It? - The Homeowners Column - University of Illinois Extension serving Champaign, Ford, Iroquois and Vermilion Counties.