It was called her “Let them eat cake” moment.

Dressing all the way to the bank. The head of the IMF has attracted attention for her sartorial elegance. But what is the secret behind her fashion icon status? Robb Young considers the style signifiers It was during a particularly gruelling session at one of the emergency summits held to keep the Eurozone from falling apart that – for a very brief moment – Christine Lagarde appeared to be on the verge of losing her famous composure. 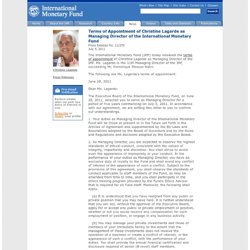 Ms. Lagarde is the 11th Managing Director of the IMF, succeeding Mr. Dominique Strauss-Kahn. The following are Ms. June 29, 2011 Dear Ms. The Executive Board of the International Monetary Fund, on June 28, 2011, selected you to serve as Managing Director for a period of five years commencing on July 5, 2011. 1. 2. (a) It is understood that you have resigned from any public or private position that you may have held. (b) You may manage your private investments and those of members of your immediate family to the extent that the management of those investments does not involve the operation of a business or create a conflict of interest, or the appearance of such a conflict, with the performance of your duties. 3. 4. 5. 6. 7. 8. 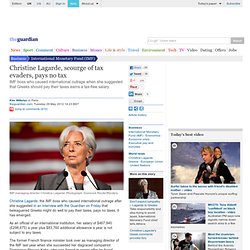 Photograph: Dominick Reuter/Reuters Christine Lagarde, the IMF boss who caused international outrage after she suggested in an interview with the Guardian on Friday that beleaguered Greeks might do well to pay their taxes, pays no taxes, it has emerged. As an official of an international institution, her salary of $467,940 (£298,675) a year plus $83,760 additional allowance a year is not subject to any taxes. The former French finance minister took over as managing director of the IMF last year when she succeeded her disgraced compatriot Dominique Strauss-Kahn, who was forced to resign after he faced charges – later dropped – of sexually attacking a New York hotel maid.

Lagarde, 56, receives a pay and benefits package worth more than American president Barack Obama earns from the United States government, and he pays taxes on it. Cnbc: Why Christine Lagarde Doesn’t Pay Tax. The irony of the news coming in the same week that Lagarde faced a storm of criticism for speaking of “all those people in Greece who are trying to avoid tax” in an interview with The Guardian was not missed. 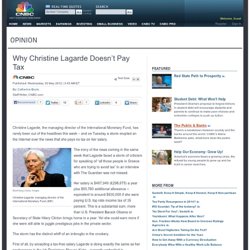 Her salary is $467,940 (£298,675) a year plus $83,760 additional allowance – equivalent to around $630,000 if she were paying U.S. top rate income tax of 35 percent. This is a substantial sum, more than U.S. President Barack Obama or Secretary of State Hilary Clinton brings home in a year. Yet she could earn more if she were still able to juggle prestigious jobs in the private sector. The storm has the distinct whiff of an imbroglio in the crockery. First of all, by accepting a tax-free salary Lagarde is doing exactly the same as her predecessor in the job Dominique Strauss-Kahn - currently embroiled in insalubrious sex ring allegations in France – and indeed other United Nations employees. Written by CNBC's Catherine Boyle. Telegraph: Christine Lagarde attack on Greece backfires as she pays no tax. Ms Lagarde was forced to publish an embarrassing climbdown on her Facebook page over the weekend after being bombarded by hundreds of Greek people who felt insulted by her suggestion that the country’s crisis was partly due to “all these people in Greece who are trying to escape tax”. 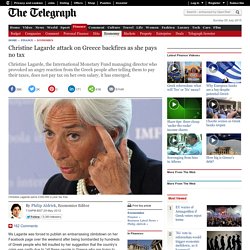 However, on Tuesday she had to admit that her $467,940 (£300,000) annual salary and $83,760 of additional allowances are entirely tax-free as the IMF is an international organisation. An IMF spokesman said: “Salaries, like those in most international organizations, are paid on a lower, net of tax basis to ensure equal pay for equal work regardless of nationality.” He added that Ms Lagarde, 56, does pay all other “taxes levied on her, including local and property taxes in the US and France”. Independent: Anger over Christine Lagarde's tax-free salary - Europe - World. The IMF chief Christine Lagarde was accused of hypocrisy yesterday after it emerged that she pays no income tax – just days after blaming the Greeks for causing their financial peril by dodging their own bills. 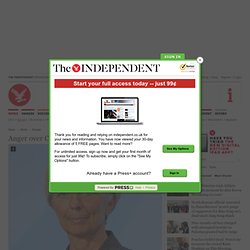 The managing director of the International Monetary Fund is paid a salary of $467,940 (£298,675), automatically increased every year according to inflation.