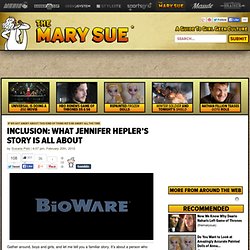 It’s about a person who works in the game industry, who said some things about games five years ago. Then a week ago, some gamers took screenshots of those things and photoshopped them next to a picture of that person, a nickname that drew negative attention to the person’s physical appearance, some completely unrelated quotations (made to appear attributed to the person) and added a list of descriptive words: “CANCER INFECTION BLIGHT VERMIN DISEASE SEWAGE PLAGUE WASTE.”

Then they put it up on Reddit, in post calling the person “the cancer that is killing Bioware.” Upvotes and downvotes were voted, gamer rage was raged, and eventually moderators on r/gaming deleted the post entirely because that person from the game industry had started getting harassing calls on her home phone. Oh, did I not mention that this person who works in the gaming industry is female? Wow, you say, that’s pretty nuts. So what is this about? Kim Swift. A graduate of DigiPen, Kim Swift and a group of her fellow graduates developed Narbacular Drop, a portal-based game that was later presented to Valve, which led to Gabe Newell personally offering to hire them so that they could create the critically acclaimed game Portal.[1] Kim Swift was both the leader of the Portal team as well as a level designer. Besides Portal, Swift has been involved in other Valve projects, most notably Left 4 Dead and its sequel, Left 4 Dead 2, where she also played a leading role in development.[2] In December 2009, Swift left Valve to join Airtight Games.

There, in cooperation with Square Enix, she led the team that developed Quantum Conundrum. On the announcement of the Amazon Fire TV microconsole, Amazon also reported that they have brought Swift in to help build games in their internal studio.[3] Rhianna Pratchett - Home. Rhianna Pratchett. Career[edit] 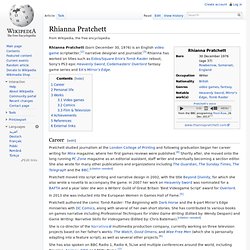 Kokoromi Collective - Experiment! CINDY POREMBA - Media Researcher, Artist, Curator. HEATHER KELLEY - Media Artist & Game Designer. ROBERTA WILLIAMS - Game Writter and Designer. Career[edit] Ars Technica stated that Roberta Williams was "one of the more iconic figures in adventure gaming".[8] GameSpot once named her as the number ten in their list of "the most influential people in computer gaming of all time" for "pushing the envelope of graphic adventures" and being "especially proactive in creating games from a woman's point of view, and titles that appealed to the mainstream market, all the while integrating the latest technologies in graphics and sound wherever possible. 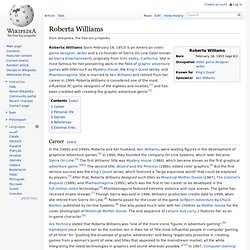 Phantasmagoria (video game) Phantasmagoria is an interactive movie psychological horror point-and-click adventure game created by Sierra On-Line for the PC, and later for the Sega Saturn in Japan. 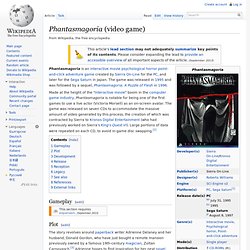 The game was released in 1995 and was followed by a sequel, Phantasmagoria: A Puzzle of Flesh in 1996. During her exploration of the grounds, Adrienne unwittingly releases Carno's demon, and it promptly possesses her husband. Don becomes more aggressive towards Adrienne and, in a controversial scene, even rapes her. She finds help in Harriet, a superstitious vagrant taking refuge in Adrienne's barn. Adrienne researches the Carnovasch estate's history and learns of the deaths of Zoltan's wives and his daughter Sofia. Adrienne discovers that Zoltan met his demise when his last wife, Marie, realized he was a murderer. BRENDA BRATHWAITE - Game Designer and Developer. Brenda Louise Romero (née Garno) (born October 12, 1966), previously known as Brenda Brathwaite, is an American game designer and developer in the video game industry. 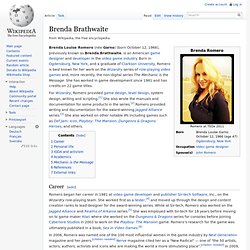 Born in Ogdensburg, New York, and a graduate of Clarkson University, Romero is best known for her work on the Wizardry series of role-playing video games and, more recently, the non-digital series The Mechanic is the Message. She has worked in game development since 1981 and has credits on 22 game titles. For Wizardry, Romero provided game design, level design, system design, writing and scripting.[1] She also wrote the manuals and documentation for some products in the series.[2] Romero provided writing and documentation for the award-winning Jagged Alliance series.[3] She also worked on other notable IPs including games such as Def Jam: Icon, Playboy: The Mansion, Dungeons & Dragons: Heroes, and others. 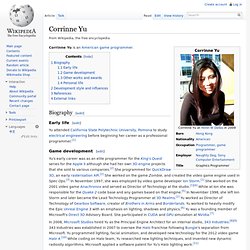 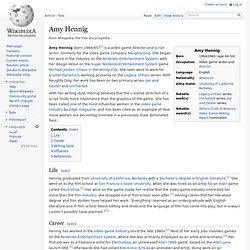 ERIN ROBINSON - Indie game designer. Erin Robinson (LivelyIvy) SHERI GRANER RAY - Game Designer. The Hollywood Reporter named Ray one of the 100 most influential women in the video game industry in 2004.[1] In 2005 she received the International Game Developers Association Award for Community Contribution at the Game Developers Choice Awards for her work on women's interests in the video game industry.[2] She is currently serving as Executive Chair for Women In Games International; an organization she co-founded. 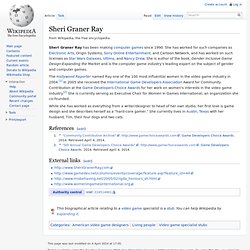 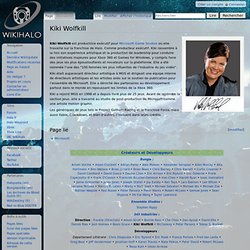 Kiki a rejoint MGS en 1998 et a depuis livré plus de 25 jeux. CHRISTY MARX - Game Writter and Designer. In 2000, Marx won the Animation Writers Caucus Animation Award from the Writers Guild of America for her contributions to the field of animation writing.[2] Her husband, Peter Ledger, was an illustrator. 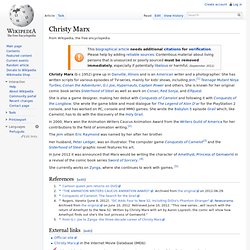 The computer game Conquests of Camelot[3] and the Sisterhood of Steel graphic novel features his art. Christy Marx: Game Writer. ZYNGA -- Senior Game Designer of Narrative Design for Zynga games from Dec. 2010 to present. Games worked on so far: Mafia Wars 2, Hidden Chronicles. LORD OF THE RINGS: War in the North -- Story editing and writing of dialog and cutscenes WAZZAMBA.COM -- Design Consultation and quest writing for virtual world site dedicated international travel. MMORPG -- Slipgate Ironworks/Gazillion Ent. Conquests of Camelot: The Search for the Grail. Conquests of Camelot: The Search for the Grail[1] is a graphic adventure game released in 1989 by Sierra. It was the first game in the Conquests series designed by Christy Marx and her husband Peter Ledger. The only other game in the series was 1992's Conquests of the Longbow: The Legend of Robin Hood. Marx did the majority of the design work while Ledger created the game and package art.

Gameplay[edit] The gameplay is typical of the Sierra adventure games of that time, however it is enriched with several arcade sequences, puzzles and riddles. Les 100 femmes les plus influentes de l'industrie du JV (2006) Brenda LaurelChair, Graduate Design Program, California College of the Arts Involved in the game industry since 1976, Brenda Laurel co-founded Purple Moon to create games for girls in 1996 (acquired by Mattel in 1999). Her books include The Art of Human-Computer Interface Design (1990), Computers as Theatre (1991), Utopian Entrepreneur (2001), and Design Research: Methods and Perspectives (2004). She states, "My experience founding Purple Moon made me a true believer in the power of design research.

10 Female Game Designers. What Do Women Game Designers Want? (The New York Times) Published: October 14, 2004 ENISE FULTON spent much of her childhood playing computer games. At 8, while growing up in Ohio, she was already playing Zork, Adventure and other text-based games. And the fascination continued into her adult years.

So it is not surprising that today Ms. Fulton, 34, is an executive producer at Ion Storm, a video game company in Austin, Tex., where she is overseeing the next installment in the popular Deus Ex series. The surprising part is how rare Ms. LUCY BRADSHAW - Executive Producer. Interview - RIMA BREK d'Ubisoft.