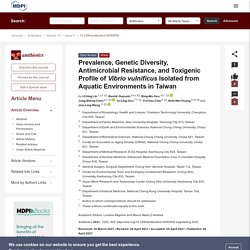 In this study, two fishing harbors and three tributaries of the river basin were analyzed for the prevalence of V. vulnificus in the water bodies and shellfish that are under the pressure of external pollutions. The average detection rate of V. vulnificus in the river basins and fishing harbors was 8.3% and 4.2%, respectively, in all seasons. A total of nine strains of V. vulnificus were isolated in pure cultures from 160 samples belonging to river basins and fishing harbors to analyze the antibiotic susceptibility, virulence gene profiles, and enterobacterial repetitive intergenic consensus PCR (ERIC-PCR) fingerprinting. All isolates were susceptible to 10 tested antibiotics. ►▼ Show Figures Figure 1. AYDIN GASTRONOMY, 2 (2):61-72, 2018 Potential Seafood Safety Hazard: Vibro vulnificus. OMS - 2020 - Risk assessment tools for Vibrio parahaemolyticus and Vibrio vulnificus associated with seafood. 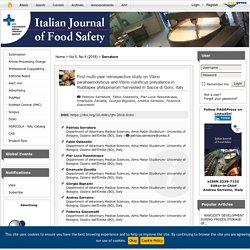 On the whole, 104 samples, collected in the period 2007-2015 and submitted to microbiological analyses (isolation and genotyping), have been reconsidered for Vibrio spp. load, V. parahaemolyticus prevalence (total, gene marker toxRP; potentially pathogenic, gene markers tdh and/or trh) and V. vulnificus prevalence (total, gene markers vvhA and hsp) together with environmental data obtained from the monitoring activity of the Emilia-Romagna Regional Agency for the Prevention, the Environment and the Energy. Keywords. ITALIAN JOURNAL OF FOOD SAFETY 10/07/17 Preliminary study on the antimicrobial susceptibility pattern related to the genotype of Vibrio vulnificus strains isolated in the north-western Adriatic Sea coastal area. Abstract V. vulnificus is a Gram-negative bacterium, commonly found in estuarine and coastal habitats, that can infect humans through seafood consumption or wound exposure. 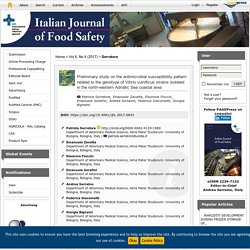 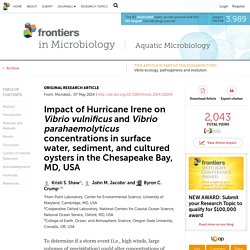 Aquacultured oysters were sampled from two levels in the water column: surface (0.3 m) and near-bottom (just above the sediment). Microbiol Res. 2010 Oct 20;165(8):657-64. Epub 2010 Jan 27. Detection of Vibrio vulnificus in seafood, seawater and wastewater samples from a Mediterranean coastal area. 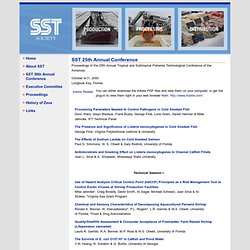 October 9-11, 2000 Longboat Key, Florida You can either download the Adobe PDF files and view them on your computer, or get the plug-in to view them right in your web browser from: Copyright: 2000 Seafood Science and Technology Society of the Americas All presentations found on this website are property of the Seafood Science and Technology Society (SST) and the respective authors.

Any direct use of or incorporation of visuals and details from the presentations are prohibited without the consent of the SST and the respective authors. Return to top. KOSFIC. Letters in Applied Microbiology 1998, 26, 110–112 Occurrence and distribution of Vibrio vulnificus in tropical fish and shellfis. INTERSTATE SHELLFISH SANITATION CONFERENCE - VIBRIO VULNIFICUS - FACT SHEET. DG SANCO 15/10/01 Scientific Committee on Veterinary Measures relating to Public Health - Opinion on Vibrio vulnificus and Vibri. FDA 13/11/09 FDA Statement on Vibrio Vulnificus in Raw Oysters. For Immediate Release: Nov. 13, 2009 Media Inquiries: Meghan Scott, 301-796-4675, Meghan.Scott@fda.hhs.govConsumer Inquiries: 888-INFO-FDA FDA Statement on Vibrio Vulnificus in Raw Oysters Several weeks ago, the FDA announced its intent to change, by summer 2011, its policy regarding the post-harvest processing of raw Gulf Coast oysters harvested in the warmer months. 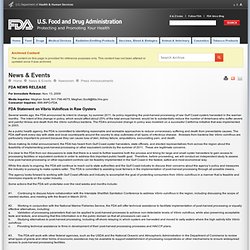 The intent of this change in policy, which would affect about 25% of the total annual harvest, would be to substantially reduce the number of Americans who suffer severe and painful illness and death from the Vibrio vulnificus bacteria. The FDA's announced change in policy was modeled on a successful California initiative that was implemented in 2003.

As a public health agency, the FDA is committed to identifying reasonable and workable approaches to reduce unnecessary suffering and death from preventable causes. Some actions that the FDA will undertake over the next weeks and months include: #1. . #2. . #3. . #4. CSPI - JUIN 2010 - Gulf Coast Oysters Unsafe (But Not For the Reason You Think) Deadly Vibrio Vulnificus Bacteria, Not Oil, Contaminate Gulf Oysters Every Summer June 24, 2010 WASHINGTON—Gulf Coast politicians are tripping over themselves to assure consumers that seafood from the Gulf is safe to eat. 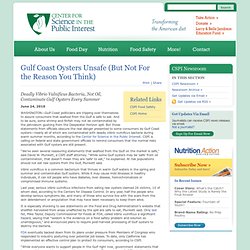 And to be sure, some shrimp and finfish may not be contaminated by the petroleum gushing from the Deepwater Horizon spill. But those statements from officials obscure the real danger presented to some consumers by Gulf Coast oysters—nearly all of which are contaminated with deadly Vibrio vulnificus bacteria during warm summer months, according to the Center for Science in the Public Interest. CSPI is calling on federal and state government officials to remind consumers that the normal risks associated with Gulf oysters are still present.