Beehive Tower is a Honeycomb Inspired Vertical Farm for London 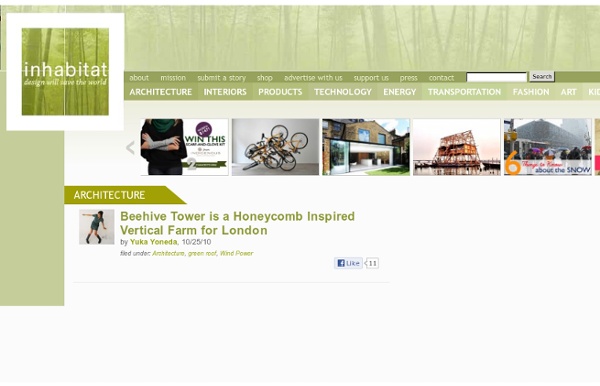 The aim of the Beehive Tower is to provide the Canary Wharf community of city dwellers a place to garden and live. The tower’s hexagonal mega structural lattice contains greenhouse spaces that also serve as a place for people to meet and socialize. Each hexagon is 8 stories high and contains 8 duplex apartments. Atop the tower, fourteen Quiet Revolution QR12 turbines collect enough wind to generate 420,000kWh a year. Via CTBUH Images © CTBUH Related:  la ferme du futur

'Vertical farm' blossoms at meatpacking plant Greens and mushrooms grown at the Plant with homemade sauce and bread by Carla, the plant's mycologist. John Edel is building a zero waste veritcal farm on Chicago's South SideIt has bakers, fish farmer, tea brewer and other farms working with each other to use wasteEdel hopes this will show other businesses the ease of adapting to green initiatives (CNN) -- An old meatpacking plant on Chicago's South Side is being transformed into an eco farm, which its founders says will produce food sustainably, while creating zero waste. American entrepreneur John Edel is the founder of "The Plant," a vertical-farm initiative that he hopes will show people the ease of adapting to green food production in urban living environments. A vertical farm is an urban agriculture concept whereby food is grown in and on top of buildings in city areas. Watch: A farm on every roof top At a certain point I realized if we built an anaerobic digester, we could get our waste down to zero.

DIY Vertical Garden | How To Start | Gardening Tips ‘n Ideas A DIY Vertical Garden Example Ever since coming across Patrick Blanc’s vertical garden I’ve been interested to observe how this technology might transform the home gardening scene. I mean, it’s only a matter of time before we begin running out room for gardens to grow on a horizontal plane. Yet vertical – that’s another dimension altogether. For most home gardeners the concept isn’t a new one. The reason: Whereas all our other vertical gardening exploits centred around plants being grounded in the soil, the vertical garden has absolutely no dependency on the ground. But for most home gardeners, Patrick Blanc and his artworks are far beyond the comprehension and resources available to them. However, as we have already experienced with increasing gas prices our conservative views of the world may need to change. So, here’s a challenge for us all – myself included. A few helpful links to get your DIY Vertical Garden started The basics of a DIY Vertical Garden Conclusion

Plantagon Breaks Ground on its First 'Plantscraper' Vertical Farm in Sweden! Several years ago a Swedish-American company called Plantagon unveiled plans for a series of massive skyscraper greenhouses that stood to transform urban farming in large cities. While the spiraling vertical farms seemed too good to be true at the time, Plantagon broke ground on its very first vertical farm a few weeks ago in Linkoping, Sweden! The "Plantscraper" will grow and supply fresh vegetables while creating solutions to some of the most vexing city pollution issues. Plantagon seems to have traded in its initial geodesic dome design for a sheer tower that both contains and showcases the plants growing inside. Inside the massive glass walls, vegetables will be grown in pots and then transitioned to trays positioned around a giant central helix. Construction on the company’s first enormous vertical greenhouse is expected to take 12 to 16 months. + Plantagon Via treehugger

A Vertical Garden Feeds 10,000+ Visitors to Chicago O'Hare Airport Growing Your Greens/Video screen capture John of Growing Your Greens has been busy in Chicago. No sooner does he post a video of an old meat packing plant morphing into a gigantic vertical farm and food processing facility, than we also get a visit to an urban garden that is bang in the middle of Chicago O'Hare airport. There is always a significant energy footprint involved with growing food indoors. The educational and entertainment aspect of this project alone make it worthwhile in my book. But this is definitely a step in the right direction. Growing up - is vertical farming the future? Are high rise farms, vertical farming, and urban farming the solution to feeding our growing population? More and more architects, politicians and urban planners are latching on to the idea that something radical has to be done to feed the world’s rapidly growing cities in the coming decades. And not just cities, what about the world’s increasing arid zones, and areas of depleted farming land? What about the pressures to control carbon emissions and reduce food miles? These questions have led us at Valcent Products in Cornwall to design VertiCrop – a vertical growing system which is now selling worldwide. Because VertiCrop is designed for controlled environment growing, plant growth can be fully optimised, meaning good quality produce, and more crop cycles per annum. So, if it is as good as it sounds, will VertiCrop become the standard means of production? It’s predicted that there will be 9bn of us on the planet by 2050, and the majority of those in cities.

The Rise of Urban Farming and Other Varieties of Sustainable Ag My newest buzzword for 2011 is CSA. I'd never heard the term until recently, but now it seems to be popping up all over, as is interest in sustainable agriculture and urban farming. CSA stands for Community Supported Agriculture -- the practice of signing up with a local farm for weekly produce and, in some cases, meat and dairy. I first read about CSA in Kristin Kimball's recent memoir, "The Dirty Life," which is justly attracting rave reviews on Amazon. A Manhattan writer who gave up the city for love, she has been farming an organic spread, Essex Farm, in upstate New York since 2003, with her husband, Mark. Kimball's book is an engrossing depiction of the back-breaking work and edible rewards of CSA. Urban farming is also on the rise. Urban farming comes in a variety of models. A vision of urban and vertical farming. Next Page: More visions of urban farms.

THE FUTURE OF THE FOOD SUPPLY IN THE CITY REVISITED: IS VERTICAL FARMING (AT THE PRECIOUS HEART OF THE CITY) A GREENER AND ALTERNATIVE WAY TO PRODUCE FOOD? NOW, AFTER TRIALS AND ERRORS, THE IDEA IS ABOUT TO BE PROVEN. | URBAN 360º by Pablo Sánchez Chillón “An indoor farmer doesn’t pray for rain”. Several studies confirm that, by the year 2050, nearly 80% of the Earth’s population will reside in urban centers (today’s rate is up to 60%). Applying the most conservative estimates to current demographic trends, the human population will increase by about 3 billion people during that period, posing new challenges to sustainability and development. An estimated 109 hectares of new land (about 20% more land than is represented by Brazil) will be needed to grow enough food to feed them, if traditional farming practices continue as they are practiced today. At present, throughout the world, over 80% of the land that is suitable for raising crops is in use (sources: FAO and NASA). Historically, some 15% of that has been laid waste by poor management practices. Furthermore, the additional land available for cultivation is unevenly distributed, and much of it is suitable for growing only a few crops. The topic is not new. For further reading:

Interview With The Father Of Vertical Farming – Dr. Dickson Despommier This is a community post, untouched by our editors. According to the Vertical Farm Project, by the year 2050 the earth’s human population will have increased by around 3 billion, and 80% will reside in urban centers. The project estimates 109 hectares of new land (about 20% more land than the area of Brazil) will be needed to grow enough food to feed them, if traditional farming practices continue as they are practiced today. Though at its core, the project asks; “How are we to avoid this impending disaster”? The man behind this project, Dr. Dr. Former Columbia professor Dr. I spoke to him from his home in New Jersey. Read about The Virtues of Vertical Farming (URBNFUTR). For those who have never heard of the concept, can you please briefly explain the main premise of vertical farming? Very simply it’s hightech hydroponic greenhouses stacked on top of one another that grow food within an urban landscape. See another video on Plantagon’s development here. Well, I’m very surprised by that too…